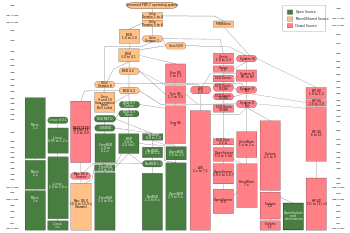 Evolution of Unix and Unix-like systems, starting in 1969

A Unix-like (sometimes referred to as UN*X or *nix) operating system is one that behaves in a manner similar to a Unix system, while not necessarily conforming to or being certified to any version of the Single UNIX Specification. A Unix-like application is one that behaves like the corresponding Unix command or shell. There is no standard for defining the term, and some difference of opinion is possible as to the degree to which a given operating system or application is "Unix-like".

The term can include free and open-source operating systems inspired by Bell Labs' Unix or designed to emulate its features, commercial and proprietary work-alikes, and even versions based on the licensed UNIX source code (which may be sufficiently "Unix-like" to pass certification and bear the "UNIX" trademark).

The Open Group owns the UNIX trademark and administers the Single UNIX Specification, with the "UNIX" name being used as a certification mark. They do not approve of the construction "Unix-like", and consider it a misuse of their trademark. Their guidelines require "UNIX" to be presented in uppercase or otherwise distinguished from the surrounding text, strongly encourage using it as a branding adjective for a generic word such as "system", and discourage its use in hyphenated phrases.[1]

Other parties frequently treat "Unix" as a genericized trademark. Some add a wildcard character to the name to make an abbreviation like "Un*x"[2] or "*nix", since Unix-like systems often have Unix-like names such as AIX, A/UX, HP-UX, IRIX, Linux, Minix, Ultrix, and Xenix. These patterns do not literally match many system names, but are still generally recognized to refer to any UNIX descendant or work-alike system, even those with completely dissimilar names such as Darwin/OS X, illumos/Solaris or FreeBSD.

In 2007, Wayne R. Gray sued to dispute the status of UNIX as a trademark, but lost his case, and lost again on appeal, with the court upholding the trademark and its ownership.[3][4] 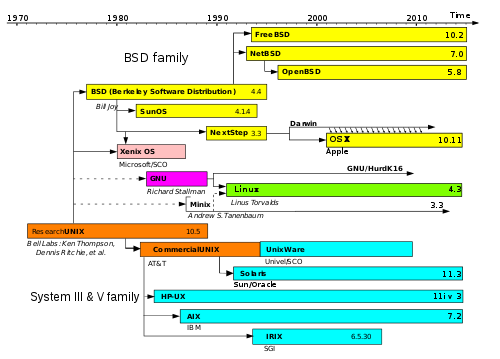 When AT&T allowed relatively inexpensive commercial binary sub-licensing of UNIX in 1979, a variety of proprietary systems were developed based on it, including AIX, HP-UX, IRIX, SunOS, Tru64, Ultrix, and Xenix. These largely displaced the proprietary clones. Growing incompatibility among these systems led to the creation of interoperability standards, including POSIX and the Single UNIX Specification.

The various BSD variants are notable in that they are in fact descendants of UNIX, developed by the University of California at Berkeley with UNIX source code from Bell Labs. However, the BSD code base has evolved since then, replacing all of the AT&T code. Since the BSD variants are not certified as compliant with the Single UNIX Specification (except for Mac OS X 10.5 Leopard and later), they are referred to as "UNIX-like".

Dennis Ritchie, one of the original creators of Unix, expressed his opinion that Unix-like systems such as Linux are de facto Unix systems.[11] Eric S. Raymond and Rob Landley have suggested that there are three kinds of Unix-like systems:[12]

Genetic UNIX
Those systems with a historical connection to the AT&T codebase. Most (but not all) commercial UNIX systems fall into this category. So do the BSD systems, which are descendants of work done at the University of California, Berkeley in the late 1970s and early 1980s. Some of these systems have no original AT&T code but can still trace their ancestry to AT&T designs.

Trademark or branded UNIX
These systems—​​largely commercial in nature—​​have been determined by the Open Group to meet the Single UNIX Specification and are allowed to carry the UNIX name. Most such systems are commercial derivatives of the System V code base in one form or another, although Apple Mac OS X 10.5 and later is a BSD variant that has been certified, and a few other systems (such as IBM z/OS) earned the trademark through a POSIX compatibility layer and are not otherwise inherently Unix systems. Many ancient UNIX systems no longer meet this definition.

Functional UNIX
Broadly, any Unix-like system that behaves in a manner roughly consistent with the UNIX specification, including having a "program which manages your login and command line sessions";[13] more specifically, this can refer to systems such as Linux or Minix that behave similarly to a UNIX system but have no genetic or trademark connection to the AT&T code base. Most free/open-source implementations of the UNIX design, whether genetic UNIX or not, fall into the restricted definition of this third category due to the expense of obtaining Open Group certification, which costs thousands of dollars[citation needed] for commercial closed source systems.
Around 2001, Linux was given the opportunity to get a certification including free help from the POSIX chair Andrew Josey for the symbolic price of one dollar.[citation needed] There have been some activities to make Linux POSIX-compliant, with Josey having prepared a list of differences between the POSIX standard and the Linux Standard Base specification,[14] but in August 2005, this project was shut down because of missing interest at the LSB work group.[citation needed]