Zwickau (German pronunciation: [ˈtsvɪkaʊ]; Sorbian: Šwikawa, Czech Cvikov) is a town in Saxony, Germany, it is the capital of the district of Zwickau. Zwickau is situated in a valley at the foot of the Erzgebirge mountains and is also part of what is called the Saxon triangle metropolitan area, an economic network which includes Leipzig-Halle, Dresden and Chemnitz. The town has slightly fewer than 100,000 inhabitants, but has a regional catchment area of over 480,000 people.[2] From 1834 until 1952 Zwickau was the seat of the government of the south-western region of Saxony.

Zwickau, known as the city of automobiles,[3] is the centre of the Saxon automotive industry, with a tradition over one hundred years old. Well known beyond Germany's borders are car makers such as Horch, Audi, Auto Union (silver arrows Type A, B, C, D), Trabant and Volkswagen. Since 2000 its history has been presented in the August-Horch Museum,[4] inside the former Audi Works. The West Saxon University of Applied Sciences of Zwickau (Westsächsische Hochschule Zwickau) is an important centre for educating and training automotive engineers.

The valley of the 166 kilometres (103 miles) long Zwickauer Mulde river stretches from the Vogtland to Colditz Castle at the other end. The Silver Road, Saxony's longest tourist route, connects Dresden with Zwickau. The German ADAC City Guide recently wrote: "The town of Zwickau has transformed itself over the years from a traditional mining town into an elegant Art-Nouveau town, which is well worth discovering."[5]

Zwickau can be reached easily by car via the nearby Autobahns A4 and A72, the main railway station (Zwickau Hauptbahnhof) and is also reachable via a public airfield which takes light aircraft.

The main market of Zwickau 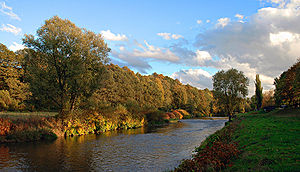 The region around Zwickau was settled by Slavs as early as the 7th century. The name Zwickau is probably a Germanisation of the Sorbian toponym Šwikawa, which derives from Svarozič, the Slavic Sun and fire god.[6] In the 10th century, German settlers began arriving and the native Slavs were Christianized. A trading place known as terretorio Zcwickaw was mentioned in 1118. The settlement received a town charter in 1212 and hosted Franciscans and Cistercians during the 13th century. Zwickau was a free imperial city from 1290–1323, but was subsequently granted to the Margraviate of Meissen. Although regional mining began in 1316, extensive mining increased with the discovery of silver in the Schneeberg in 1470. Because of the silver ore deposits in the Erzgebirge, Zwickau developed in the 15th and 16th centuries and grew to be an important economic and cultural centre of Saxony.

Among the nine churches, the fine Gothic church of St. Mary (1451–1536), with a spire 285 ft. high and a bell weighing 51 tons, stands out. The church contains an altar with wood-carving, eight paintings by Michael Wohlgemuth and a remarkable pietà in carved and painted wood by Peter Breuer.

The late Gothic church of St. Catharine has an altar piece ascribed to Lucas Cranach the elder, and is remembered because Thomas Müntzer was once pastor there (1520–22). Of the secular buildings the most noteworthy are the town hall, begun in 1404 and rebuilt many times since then. The municipal archives include documents dating back to the 13th century.

The carefully preserved treasures of art and literature (early printed books from the Middle Ages), documents, letters and books are kept in the Town Archives (e.g. Meister Singer volumes by Hans Sachs (1494 - 1576)), and in the School Library founded by scholars and by the town clerk Stephan Roth during the Reformation.

In 1520 Martin Luther dedicated his treatise "On the Freedom of the Christian Man" to his friend Hermann Muehlpfort, the Lord Mayor of Zwickau. The Anabaptist movement of 1525 began at Zwickau under the inspiration of the "Zwickau prophets".[7] After Wittenberg, it became the first city in Europe to join the Lutheran Reformation. The late Gothic Gewandhaus (cloth merchants' hall), was built in 1522-24 and is now converted into a theatre. Confessional warfare devastated the city during the Thirty Years' War.

The old city of Zwickau, perched on a hill, is surrounded by heights with extensive forests and a scenic municipal park. Its surroundings offer many opportunities for excursions - to the Hartenstein area, for example, with its castle "Stein", and the "Prinzenhöhle", with its castle "Wolfsbrunn" (nowadays a luxury 5-star Hotel), as well as the Auersberg (1019 meters) with the popular winter sport region of Johanngeorgenstadt and the Vogtland.

In the Old Town the Cathedral and the Gewandhaus (historic cloth merchants' hall) recall the flourishing ecclesiastical, trade and artistic life of the 16th century, which was based on Schneeberg silver. In the 19th century the city's economy was driven by industrial hard-coal mining. Zwickau was the main site of the Saxon coal miners, and at the same time one of the most important industrial towns of the country. It is also the cradle of the Saxon automobile industry.

Today, the most important employer in the region is Volkswagen which assembles its Golf, Passat and Phaeton models in the Zwickau-Mosel vehicle plant. 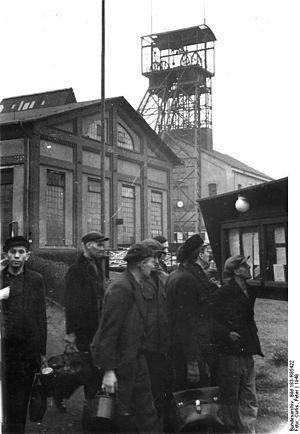 The Brückenberg I Hard coal mine (later named Karl-Marx), here in 1948 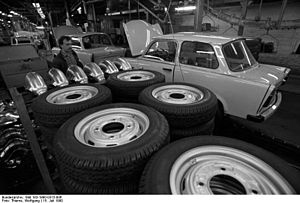 Production of the last Trabant in 1990

Hard-coal mining is mentioned as early as 1348.[7] However, mining on an industrial scale first started in the early 19th century. The hard-coal mines of Zwickau, and the neighbouring Oelsnitz-Lugau coalfield contributed significantly to the industrialisation of the region and the town.

For a long period of its history, the Zwickau area was the centre of hard-coal mining. In 1885 Carl Wolf invented an improved gas-detecting safety mining-lamp. He held the first world patent for it. Together with his business partner Friemann he founded the "Friemann & Wolf" factory. The plant was one of the first Germany global players in the 19th century. Coal mining was abandoned for economical reasons in 1978 after about 230 millions tonnes had been mined from the Carboniferous deposit to depths of over 1,000 metres. However, Zwickau remained a mining-related town until 1992 when the last coke oven plant operating in the town was closed. The closure of the plant marked the historical end of 700 years of hard-coal industry in Saxony.

Many industrial branches developed in the town in the wake of the hard-coal mining industry: mining equipment, iron and steel works, textile, machinery in addition to chemical, porcelain, paper, glass, dyestuffs, wire goods, tinware, stockings, and curtains. There were also steam saw-mills, diamond and glass polishing works, iron-foundries, and breweries.

In 1904 the Horch automobile plant was founded, followed by Audi factory in 1909. In 1932 both brands were incorporated into the Auto Union but retained their independent trademarks. The Auto Union racing cars, developed by Ferdinand Porsche and Robert Eberan von Eberhorst, driven by Bernd Rosemeyer, Hans Stuck, Tazio Nuvolari, Ernst von Delius, became well known all over the world. During World War II, the Nazi government operated a satellite camp of the Flossenbürg concentration camp in Zwickau which was sited near the Horch Auto Union plant. The Nazi administration installed a hard labour punishment camp at the Osterstein Castle. Both camps were liberated by US Army in 1945. On August 1, 1945, the military administration was taken over from the US by the Soviet Army. The Auto Union factories of Horch and Audi were disassembled by the Russians; Auto Union itself relocated to Ingolstadt, Bavaria, evolving into the present day Audi company. In 1948 all large companies were expropriated by the East German administration.

With the founding of the German Democratic Republic in 1949 in East Germany, the difficult post-war reconstruction began. In 1958 the Horch and Audi factories were merged into the Sachsenring plant. At the Sachsenring automotive plant the compact Trabant cars were manufactured. These small cars had a two-cylinder, two-stroke engine. The car was the first vehicle in the world to be industrially manufactured with a plastic car body. The former VEB Sachsenring manufacturing site was acquired by Volkswagen in 1990 (thus once again having the same owner as Audi), and has since been redeveloped as an engine and transmission manufacturing site.

Audi-AG together with the city of Zwickau operates the August Horch Museum in the former Audi works.

Two major industrial facilities of the Soviet SDAG Wismut were situated in the city: the uranium mill in Zwickau-Crossen, producing uranium concentrate (so called "yellow cake") from ores of mines in the Erzgebirge and Thuringia, and the machine building plant in Zwickau-Cainsdorf producing various equipment for the uranium mines and mills of East Germany. Uranium milling ended in 1989, and after the reunification the Wismut machine building plant was sold to a private investor.

The production of the Trabant was discontinued after German reunification, but Volkswagen built a new factory, and Sachsenring is now a supplier for the automobile industry. Nowadays the headquarters of the Volkswagen-Saxony Ltd. (a VW subsidiary) is in the northern part of Zwickau.

Zwickau is home to the West Saxon University of Applied Sciences with about 5200 students and two campuses within the boundaries of Zwickau.

The city can be easily reached by car via the nearby Autobahns A4 and A72. Zwickau is connected to the Autobahn A72 (Hof-Chemnitz) south of the town and to the A4 (Dresden-Erfurt) 15 kilometres (9 miles) north of the town.

Zwickau Hauptbahnhof is on the Dresden–Werdau line, part of the Saxon-Franconian trunk line, connecting Nuremberg and Dresden. There are further railway connections to Leipzig as well as Karlovy Vary and Cheb in the Czech Republic. The core element of Zwickau's urban public transport system is the Zwickau tramway network; the system is also the prototype of the so-called Zwickau Model for such systems.

The closest airport is *Leipzig-Altenburg with a very limited number of flights operated by the low cost carrier Ryanair. The nearest major airports are Leipzig-Halle and Dresden offering a large number of national and international flights. 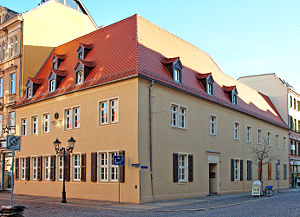 House where Robert Schumann was born 1810, museum at Hauptmarkt 5

In the town centre there are three museums: an art museum from the 19th century and the houses of priests from 13th century, both located next to St. Mary's church. Just around the corner there is the Robert-Schumann museum. The museums offer different collections dedicated to the history of the town, as well as art and a mineralogical, palaeontological and geological collection with many specimens from the town and the nearby Erzgebirge Mts. and the music of the romantic school.

Zwickau is also the birthplace of Robert Schumann. The house where he was born in 1810 still stands in the marketplace. This is now called Robert-Schumann-House and is a museum dedicated to him.

The histories of the Audi and Horch automobile factories are presented at the August Horch Museum Zwickau. The museum is an Anchor Point of the European Route of Industrial Heritage (EIRH).