Leading seaman is a junior non-commissioned rank or rate in navies, particularly those of the Commonwealth. When it is used by NATO nations, leading seaman has the rank code of OR-4. It is often equivalent to the army and air force rank of corporal and some navies use corporal rather than leading seaman.

The badge in the Royal Australian Navy is the fouled anchor over the word "Australia", worn on the shoulders, or the fouled anchor worn on the left sleeve, depending on what uniform is worn at the time. It is senior to able seaman but junior to petty officer. Leading seaman or leading hand, which it is also known as, is the equivalent of corporal in the Royal Australian Air Force and the Australian Army. Leading seamen are addressed as "leader", and informally known as "kellicks" from the killick anchor which is the symbol of their rank.

In the Royal Canadian Navy, leading seaman (LS) is senior to the rank of able seaman, and junior to master seaman (which is actually an appointment of leading seaman). Its Army and Air Force equivalent is corporal and it is part of the cadre of junior non-commissioned officers.

Leading seamen are generally initially addressed as "Leading Seaman Smith", and thereafter as "Leading Seaman". The same rank title is used for female members. The slang term for the rank is "killick", as in the Royal Navy. The term is still used even though the old-style insignia of a fouled anchor is no longer used for this rank in the RCN.

Leading seamen generally mess and billet with other seamen and their army and air force equivalents: privates, corporals, and master corporals. Their mess on naval bases or installations is generally named the "junior ranks mess".

The Soviet Union and Russia

The shoulder board of a Russian leading seaman

"Leading seaman" (Russian: старший матрос; starshy matros; literally "senior seaman") is a naval enlisted rank of the Navy of the Russian Federation. It is senior to the lowest rank of "seaman" (Russian: матрос; matros). The rank was introduced to the Soviet Navy in 1946 and inherited by the Russian state in 1991. The former Soviet republics of Belarus and Ukraine maintain similar ranks with the same pronunciation but slightly different orthography - старшы матрос (Belarus) and старший матрос (Ukraine). 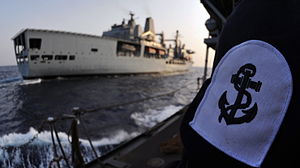 The badge of a Royal Navy leading seaman

The rate of leading seaman, leading hand or leading rating in the Royal Navy is senior to able seaman and junior to petty officer. It is equivalent to corporal in the other services. The badge is the fouled anchor (an anchor with a length of rope twisted around it), worn on the upper arm in formal uniform and on the shoulder slides in working dress.

Specialists use the word "leading" before their speciality (for example, leading writer, leading cook, leading regulator).

A leading rating is often called a "killick", referring to the rank insignia of a fouled anchor.

In the United States Navy, the position of leading seaman is usually that of the seniormost seaman (E-3) in the division. The rank equivalent of a Leading Seaman is a Petty Officer Third Class (E-4), though it should be noted that the leading seaman only has the authority of a PO3, not the rank. The leading seaman position is usually used when a PO3 or PO2 is not available.