Shannon Matilda Wells Lucid (born January 14, 1943) is an American biochemist and a retired NASA astronaut.[1] At one time, she held the record for the longest duration stay in space by an American, as well as by a woman. She has flown in space five times including a prolonged mission aboard the Mir space station in 1996; she is the only American woman to serve aboard Mir. [2] 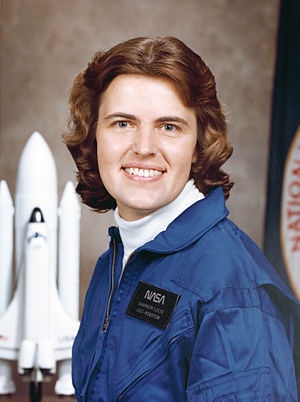 Lucid was born in Shanghai, China, to Baptist missionary parents Oscar and Myrtle Wells, but grew up in Bethany, Oklahoma and graduated from Bethany High School. She attended the University of Oklahoma and obtained a Ph.D. in biochemistry from that school in 1973.

She is married to Michael F. Lucid of Indianapolis, Indiana and they have two daughters and one son, and five granddaughters and three grandsons.

Lucid's experience includes a variety of academic assignments, such as teaching assistant at the University of Oklahoma's Department of Chemistry from 1963 to 1964; senior laboratory technician at the Oklahoma Medical Research Foundation from 1964 to 1966; chemist at Kerr-McGee, Oklahoma City, Oklahoma, 1966 to 1968; graduate assistant at the University of Oklahoma Health Science Center's Department of Biochemistry and Molecular Biology from 1969 to 1973 and research associate with the Oklahoma Medical Research Foundation in Oklahoma City, Oklahoma, from 1974 until her selection to the astronaut candidate training program. 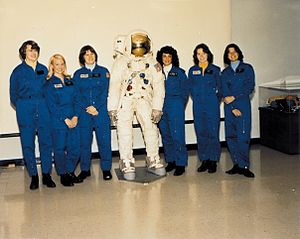 Lucid (far left) in the first class of female astronauts

Lucid was selected for the NASA Astronaut Corps in 1978. Of the six women in this first class with female astronauts, Lucid was the only one who was a mother at the time of being selected.

Lucid is best known for her fifth spaceflight, when she spent 188 days in space, from March 22 to September 26, 1996, including 179 days aboard Mir, the Russian space station. Both to and from Mir, she travelled on Space Shuttle Atlantis, launching on STS-76 and returning on STS-79. Her stay on Mir was not expected to last so long but her return was delayed twice, extending her stay by about six weeks. During the mission she performed numerous life science and physical science experiments. As a result of her time aboard Mir, she held the record for the most hours in orbit by a non-Russian and most hours in orbit by a woman. On June 16, 2007, her record for longest duration spaceflight by a woman was exceeded by Sunita Williams aboard the International Space Station.[3][4][5]

STS-51G Discovery (June 17 to June 24, 1985) was a 7-day mission, during which the crew deployed communications satellites for Mexico (Morelos), the Arab League (Arabsat) and the United States (AT&T Telstar). They used the Remote Manipulator System (RMS) to deploy and later retrieve the SPARTAN satellite, which performed 17 hours of x-ray astronomy experiments while separated from the Space Shuttle. In addition, the crew activated the Automated Directional Solidification Furnace (ADSF), six Getaway Specials and participated in biomedical experiments. The mission was accomplished in 112 orbits of the Earth, traveling 2.5 million miles in 169 hours and 39 minutes. Landing was at Edwards Air Force Base (EAFB), California.

STS-34 Atlantis (October 18 to October 23, 1989) was a 5-day mission during which the crew deployed the Galileo spacecraft, on its journey to explore Jupiter, operated the Shuttle Solar Backscatter Ultraviolet Instrument (SSBUV) to map atmospheric ozone and performed numerous secondary experiments involving radiation measurements, polymer morphology, lightning research, microgravity effects on plants and a student experiment on ice crystal growth in space. The mission was accomplished in 79 orbits of the Earth, traveling 1.8 million miles in 119 hours and 41 minutes. Landing was at Edwards Air Force Base, California.

STS-43 Atlantis (August 2 to August 11, 1991) was a 9-day mission, during which the crew deployed the fifth Tracking and Data Relay Satellite (TDRS-E). The crew also conducted 32 physical, material and life science experiments, mostly relating to the Extended Duration Orbiter and Space Station Freedom. The mission was accomplished in 142 orbits of the Earth, traveling 3.7 million miles in 213 hours, 21 minutes and 25 seconds. STS-43 Atlantis was the eighth Space Shuttle to land at KSC.

STS-58 Columbia (October 18 to November 1, 1993). This record duration 14-day mission was recognized by NASA management as the most successful and efficient Spacelab flight flown by NASA. The STS-58 crew performed neurovestibular, cardiovascular, cardiopulmonary, metabolic and musculoskeletal medical experiments on themselves and 48 rats, expanding our knowledge of human and animal physiology both on Earth and in spaceflight. In addition, they performed 16 engineering tests aboard the Orbiter Columbia and 20 Extended Duration Orbiter Medical Project experiments. The mission was accomplished in 225 orbits of the Earth, traveling 5.8 million miles in 336 hours, 13 minutes and 1 second. Landing was at Edwards Air Force Base, California. In completing this flight, Lucid logged 838 hours and 54 minutes in space. 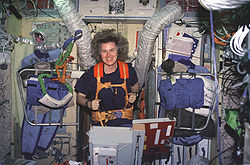 Lucid exercises on a treadmill during her stay aboard Mir.

Lucid holds the United States single-mission spaceflight endurance record on the Russian Space Station Mir. Following a year of training in Star City, Russia, her journey started with liftoff at KSC on March 22, 1996, aboard STS-76 Atlantis. Following docking, she transferred to the Mir Space Station. Assigned as a board engineer 2, she performed numerous life science and physical science experiments during the course of her stay aboard Mir. Her return journey to KSC was made aboard STS-79 Atlantis on September 26, 1996. In completing this mission, Lucid traveled 75.2 million miles in 188 days, 4 hours, 0 minutes and 14 seconds.

Lucid was awarded the Congressional Space Medal of Honor in December 1996 (for her mission to Mir), making her the tenth person and first woman to be given that honor. [8] In 1993 she was inducted into the Oklahoma Women's Hall of Fame. [9]