The Vendée (French pronunciation: ​[vɑ̃.de]) is a department in the Pays-de-la-Loire region in west-central France, on the Atlantic Ocean. The name Vendée is taken from the Vendée river which runs through the southeastern part of the department.

The area today called the Vendée was originally known as the Bas-Poitou and is part of the former province of Poitou. In the southeast corner, the village of Nieul-sur-l'Autise is believed to be the birthplace of Eleanor of Aquitaine (1122–1204). Eleanor's son, Richard I of England (the Lionheart) often had his base in Talmont. The Hundred Years' War (1337–1453) turned much of the Vendée into a battleground.

Since the Vendée held a considerable number of influential Protestants, including control by Jeanne d'Albret mother of Henry IV of France, the region was greatly affected by the French Wars of Religion which broke out in 1562 and continued until 1598. In April of that year King Henri IV issued the Edict of Nantes and the Wars came to an end. The revocation of the Edict of Nantes in 1685 caused many Huguenots to flee from the Vendée.

It is also remembered as the place where the peasants revolted against the Revolutionary government in 1793, which opened with a massacre at Machecoul in March. They resented the harsh conditions imposed on the Roman Catholic Church by the provisions of the Civil Constitution of the Clergy act (1790) and broke into open revolt after the Revolutionary government's imposition of military conscription. A guerrilla war, known as the Revolt in the Vendée, led at the outset by peasants who were chosen in each locale, cost more than 240,000 lives before it ended in 1796 (190,000 Vendeans who were republicans or royalists and 50,000 non-Vendean republican soldiers; according to the Jacques Hussenet and Centre Vendéen de Recherche Historique's book "Détruisez la Vendée"). The Revolt in the Vendée must not be confused with the revolt of the Chouans, which took place at the same time in Maine and Brittany. In 1804, Napoleon I chose La Roche-sur-Yon to be the capital of the departement. At the time, most of La Roche had been eradicated in the Vendée Revolt (1793–96); the renamed Napoléonville was laid out and a fresh population of soldiers and civil servants was brought in. Napoléonville had a square-grid street network and was designed to accommodate 15,000 people.[1]

In 1815, when Napoleon escaped exile on Elba for his Hundred Days, the Vendée refused to recognise him and stayed loyal to King Louis XVIII. General Lamarque led 10,000 men into the Vendée to pacify the region.[2] A failed rebellion in the Vendée in 1832 in support of Marie-Caroline de Bourbon-Sicile, duchess de Berry, the former King Charles X's widowed daughter-in-law, was an unsuccessful attempt to restore the Legitimist Bourbon dynasty during the reign of the Orléanist monarch, King Louis Philippe of the French (1830–1848).

In 1850, British author Anthony Trollope published his book La Vendée, detailing the history of the region and the war. In the preface he pays tribute to Madame de la Rochejaquelein, on whose memoirs of the war he based his story. 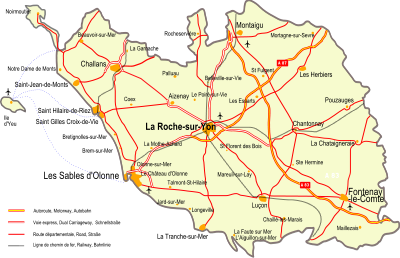 Map of the department 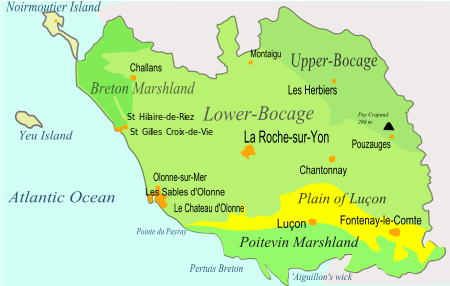 Geographic map of the Vendée

The main University of this department is the Catholic Institute of Higher Studies - ICES [8] in La Roche-sur-Yon. The main goal of this institute is to achieve academic excellence through an enhancement of the Christian and human dimension in seven areas of study. Founded in 1989, Catholic Institute of Higher Studies - ICES has pioneered a new concept in higher education, that of the “University School” : halfway between the French Grande École and the traditional state university.

The primary drivers of the Vendéen economy are:

The Vendée has been cited as the most economically dynamic department in France by L'Express magazine in a 2006 survey.[9] Its economy is characterised by a low rate of unemployment (around 7% in late 2006 compared to more than 9% nationally) and a very high proportion of small and medium-sized businesses (one business for every 14 inhabitants).

The coast of the Vendée extends over 200 kilometres (120 mi) of mostly sandy beaches. Tourists from overseas and locally frequent them. Some resorts include Les Sables-d'Olonne, La Tranche-sur-Mer and Saint-Jean-de-Monts. Some beaches are "blue flagged" for cleanliness.

With more than 100 miles (160 km)[clarification needed] of sandy beaches edged with dunes and pine woods. There is a nude beach just south of La Faute sur Mer on the Pointe d'Arçay. The department also has churches and abbeys, museums, and—for nature lovers—thousands of marked footpaths, a signposted bicycle route running along the coastal mudflats, and marshes that attract unusual birds. There is fishing in the Vendée's rivers and lakes.

Inland, the chief attractions include the Marais Poitevin (an area of marshlands famed for wildlife), the forested area around the village of Mervent and the rolling countryside of the Bocage. In the north of the department, the historical theme park Puy du Fou attracts more than 1.45 million of visitors per year.

Agriculture remains a significant source of employment in the Vendée. Among departments, it has the second highest level of revenue from agriculture in France. The major arable crops grown are maize, colza, wheat and sunflowers. Meat and dairy production also feature, as does the offshore farming of shellfish (oysters and mussels). Poultry from Challans is highly regarded nationwide as is lamb produced from the salt marshes in the North of the Vendée.

Demonstrating its support for the agricultural sector, the Conseil Général of the Vendée has a stated policy to promote the construction of irrigation reservoirs to reduce dependence on ground water during key summer growing seasons.

The Vendée is home to a number of food processing firms.[10] A manufacturer of ready-meals and charcuterie employs the majority of its workforce (some 3000 people) at local plants. Other employers include bakeries and biscuit producers.[citation needed]

The department also has some speciality products, including brioche (Label Rouge) and a raw cured ham (Jambon de Vendée) similar in flavour to bacon.[citation needed]

Wine is also produced in the area around the communes of Vix, Brem, Pissotte and Mareuil-sur-Lay, and is marketed under the "Fiefs Vendéens" designation. Production quality has improved markedly over recent years, and, having already achieved the classification Vin Délimité de Qualité Supérieure (VDQS), the wines are on their way towards A.O.C status (Appellation d’Origine Contrôlée).[11]

Much of the manufacturing industry in the Vendée reflects its status as a major tourist destination. Mobile homes are manufactured at plants in Luçon and the building of motor and sail yachts takes place at locations all over the department. The service sector too is strongly inclined towards tourism with campsites, restaurants and other tourism businesses being important sources of revenue and employment.

The Revolt in the Vendée is the subject of Ninety-Three (Quatrevingt-treize), the last novel by the French writer Victor Hugo, an episode in Mr. Midshipman Hornblower and also the backdrop of Les Chouans by Balzac. 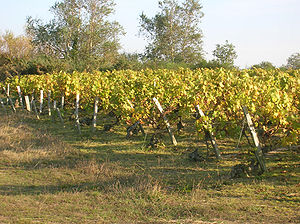 In the Vendée, 31 members, elected through universal suffrage, govern the affairs of the department, with 26 members on the right-wing and 5 members on the left-wing.

The Prefect represents the French State in the department.

The President of the General Council has been for a long time the President of the Movement for France, Philippe de Villiers. He held the office from 1988 to 2010 and was seen as the department's political strongman. He has been replaced by Bruno Retailleau.

2. "The Guillotine And The Cross" by Warren H. Carroll