The American Bar Association (ABA), founded August 21, 1878,[2] is a voluntary bar association of lawyers and law students, which is not specific to any jurisdiction in the United States. The ABA's most important stated activities are the setting of academic standards for law schools, and the formulation of model ethical codes related to the legal profession. The ABA has 410,000 members. Its national headquarters are in Chicago, Illinois; it also maintains a significant branch office in Washington, D.C. 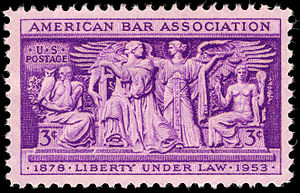 The ABA was founded on August 21, 1878, in Saratoga Springs, New York, by 75 lawyers from 20 states and the District of Columbia. According to the ABA website,

"The legal profession as we know it today barely existed at that time. Lawyers were generally sole practitioners who trained under a system of apprenticeship. There was no national code of ethics; there was no national organization to serve as a forum for discussion of the increasingly intricate issues involved in legal practice."

The purpose of the original organization, as set forth in its first constitution, was "the advancement of the science of jurisprudence, the promotion of the administration of justice and a uniformity of legislation throughout the country...."

In 1918 the first women were admitted to the ABA – Judge Mary Belle Grossman of Cleveland and Mary Florence Lathrop of Denver.[3]

The ABA did not allow African-Americans to join until 1943.[4]

The ABA mission, as stated in its 2008 mission statement, is "To serve equally our members, our profession and the public by defending liberty and delivering justice as the national representative of the legal profession."[6] The goals and objectives are:

The ABA is governed by the Office of the President; the House of Delegates, which acts as the organization's primary body for adopting new policies and recommendations as part of the association's official position; and the Board of Governors.

Accreditation of U.S. law schools since 1923

According to the ABA, it "provides law school accreditation, continuing legal education, information about the law, programs to assist lawyers and judges in their work, and initiatives to improve the legal system for the public. The Mission of the American Bar Association is to be the national representative of the legal profession, serving the public and the profession by promoting justice, professional excellence and respect for the law."[7] Since 1923, law schools which meet ABA standards are listed as "approved".[8]

ABA accreditation is important not only because it affects the recognition of the law schools involved, but it also affects a graduate's ability to practice law in a particular state. Specifically, in most U.S. jurisdictions, graduation from an ABA-accredited law school is expressly stated as a prerequisite towards being allowed to sit for that state's bar exam, and even for existing lawyers to be admitted to the bar of another state upon motion.[9] Even states which recognize unaccredited schools within their borders will generally not recognize such schools from other jurisdictions for purposes of bar admission.[10]

In June 2009, the ABA Journal reported that the ABA had been working "for months" to change its accreditation standard, where accreditation will be the result of what kind of lawyer an ABA law school produces as opposed to "input" measures such as faculty size, budget and physical plant.[13]

More recently, a non-profit organization called Law School Transparency called upon the ABA to provide meaningful statistics regarding the employment prospects and salary information of graduates of ABA accredited institutions.[14][15][16] On October 17, 2011, the ABA announced it was considering penalties, including loss of accreditation for schools that misreported their graduates employment data.[17] On December 12, 2011, despite the ongoing controversy surrounding law school accreditation standards and inability of law school graduates to effectively service their educational debt, the ABA approved yet another law school.[18]

In their upcoming July 2013 meeting, the ABA is planning on discussing whether or not law schools should still be required to have tenure options in place for their professors in order to be accredited.[19]

In 1995 the United States Department of Justice accused the ABA of violating Section 1 of the Sherman Act in its law school accreditation proceedings. The case was resolved with a consent decree.[20][21] In 2006, the ABA acknowledged that it violated the consent decree and paid DOJ a $185,000 fine.[22] 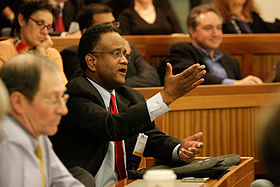 The American Bar Association Center for Continuing Legal Education (ABA-CLE) serves as the central CLE resource for the ABA by providing quality programs and products of national scope. ABA-CLE is overseen by the ABA Standing Committee on Continuing Legal Education and works closely with experts from the ABA Sections and the profession at large in developing programs and products in a variety of delivery formats. In addition to its own distribution, the ABA-CLE is also delivered via private, non-profit CLE organizations, such as Practising Law Institute and for-profit organizations, such as West LegalEdCenter.

ABA members may also join subject-specific "sections" and "divisions", and each entity publishes a variety of newsletters and magazines for its members (such as Law Practice Magazine published by the Law Practice Division and GPSolo Magazine published by the Solo, Small Firm and General Practice Division). The first such journal was the Annual Bulletin of the Comparative Law Bureau, the first comparative law journal in the U.S. (1908–1914). The sections also hold their own meetings, such as the annual Solo Day.[23]

In 1991, the Commission on Homelessness & Poverty was established by the Board of Governors of the ABA.[25] The Commission is charged with:

These tasks are carried out by thirteen volunteer members appointed by the ABA President and a staff attorney.

The ABA's Commission on Sexual Orientation and Gender Identity was established in 2007.[26] According to its website, the Commission is "leading the ABA’s commitment to diversity, inclusion and full and equal participation by lesbian, gay, bisexual and transgender persons in the Association, the legal profession and society." [27]

Commission on Women in the Profession

The ABA's Commission on Women in the Profession was established in 1987.[28] Hillary Clinton was its first chair.[28] According to its website, the Commission "forges a new and better profession that ensures that women have equal opportunities for professional growth and advancement commensurate with their male counterparts." [29]

Positions on social and legal issues

In 2011, the ABA's House of Delegates passed an anti-bullying resolution that included sexual orientation and gender identity among characteristics that should be protected, along with race, religion, national origin, sex, and disability.[26][30]

At the 2013 annual meeting, the ABA's House of Delegates passed a resolution that made it harder for criminal defense lawyers to use the LGBT panic defense, which argues that a crime victim’s sexual orientation should mitigate the defendant's guilt.[26]

At the 2014 annual meeting, the ABA passed Resolution 114B, which stated that "lesbian, gay, bisexual, and transgender (LGBT) people have a human right to be free from discrimination, threats, and violence based on their LGBT status," and called on the governments of countries where such discriminatory laws exist to repeal them.[26]

In 1989 the ABA's House of Delegates adopted a resolution stating that "the American Bar Association and each of its entities should use gender-neutral language in all documents establishing policy and procedure." [31]

In July 2006, an ABA task force under then President Michael S. Greco released a report that concluded that George W. Bush's use of "signing statements" violates the Constitution.[34] These are documents attached by the President when signing bills, in which the President states that he or she will enforce the new law only to the extent that he or she feels the law conforms to the proper interpretation of the Constitution.[35]

At the 2010 annual meeting, the ABA passed Resolution 111 urging every state, territorial, and tribal government to eliminate all legal barriers to civil marriage between two persons of the same sex who are otherwise eligible to marry.[36][37]

For decades, the ABA has participated in the federal judicial nomination process by vetting nominees and giving them a rating ranging from "not qualified" to "well qualified." According to a compendium of those ratings, the ABA's Committee on the Federal Judiciary began rating Supreme Court nominees in 1956, but: "At various points in its history, the committee altered its ratings categories, making comparisons across time difficult."[38]

The process has been alleged by some (including the Federalist Society) to have a liberal bias.[39][40][41] For example, the ABA gave Ronald Reagan's judicial nominees Richard Posner and Frank H. Easterbrook low "qualified/not qualified" ratings; later, the ABA gave Bill Clinton judicial nominees with similar resumes "well qualified" ratings.[42] Meanwhile, Judges Posner and Easterbrook have gone on to become the two most highly cited judges in the federal appellate judiciary.[43]

The ABA has been criticized for racism.[45] In 1925, African-American lawyers formed the National Bar Association at a time when ABA would not allow them to be members.

Since the 1960s, the ABA has increased the diversity of its membership. In recent years, the ABA has also drawn some criticism, mainly from the conservative side of the political spectrum, for taking positions on controversial public policy topics such as abortion, gun control, and same-sex marriage.[46] The ABA's official position in favor of abortion rights led to the formation of a (much smaller) alternative organization for lawyers, the National Lawyers Association. The Federalist Society sponsors a twice-a-year publication called "ABA Watch" that reports on the political activities of the ABA.

There are heated debates over requirements placed on law schools by the ABA. Many states and practitioners believe ABA requirements to be unnecessary, costly, outdated and lacking innovation.[47] Some legal professionals and academics feel these requirements promote the rising cost of tuition. In addition, the ABA has been criticized for requiring law schools to implement affirmative action programs to retain their accreditation.[48][49][50]

The more recent collision of attorney layoffs in 2009,[51][52] the glut of fresh non top-tier law graduates without work,[53] and the continued expansion of law schools[54] have raised questions on whether the ABA has been too lenient in its accreditation process.

The ABA has also faced criticism that it has failed or refused to stop law schools from publishing misleading data about employment and salary prospects.[55] In response, ABA President Lamm told the Newark Star-Ledger that "Law students ought to look at the numbers and envision how their future might be before going to law school, not after."[55]

Main article: List of Presidents of the American Bar Association

Each year in August, the ABA holds an annual meeting in different cities that consists of speeches, CLE classes, gatherings, and the ABA EXPO.[61] At the meeting, the recipient of the association's highest honor, the American Bar Association Medal, is announced.