The Belarusian Auxiliary Police (Belarusian: Беларуская дапаможная паліцыя, Biełaruskaja dapamožnaja palicyja; German: Weißruthenische Schutzmannschaften, or Hilfspolizei) was established in July 1941. Staffed by local inhabitants, it had similar functions to those of the German Ordnungspolizei (OrPo) in occupied territories. The activities of the formation were supervised by defense police departments, local commandants' offices, and garrison commandants. The units consisted of one police officer for every 100 rural inhabitants and one police officer for every 300 urban inhabitants. The OD was in charge of guard duty, and included both stationary and mobile posts plus groups of orderlies. It was subordinate to the defense police leadership.[1] 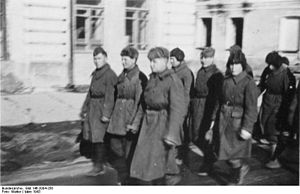 Belarusian Auxiliary Police participated in civilian massacres across villages on the territory of modern-day Belarus; dubbed the anti-partisan actions.[1][2] The Germans carried out the first killings by exerting force, using experienced guards and all necessary precautions (in Homel, Mozyrz, Kalinkowicze, Korma). The Belarusian police took on a secondary role in the first stage of the killings. The rest of the Jews were crushed and deprived of the will to live- women, children, and the elderly - was killed with the Nazis’ bare hands (in Dobrusz, Czeczersk, Żytkowicze). After a while, police, being locals, and a minimal convoy led these remaining Jews out of the ghetto to their place of death. Such a tactic was successful (without much exertion of force) in places where the liquidation of Jews was carried out early September, October–November 1941. In winter 1942, a different tactic of killing was used - raids (in Żłobin, Petryków, Streszyn, Czeczersk). The role of the Belarusian police in killing the Jews became particularly noticeable during the second wave of destruction, starting in February–March 1942.[3]