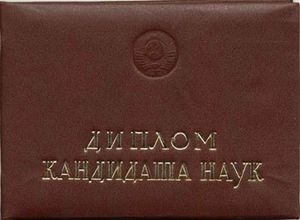 Cover of a Soviet Candidate of Sciences diploma

The Candidate of Sciences (Russian: кандидат наук, Kandidat nauk) is a first post-graduate scientific degree in some former Eastern Bloc countries, such as Russia, Belarus, Ukraine and Kazakhstan which is awarded for original research that constitutes a significant contribution to a scientific field. The degree was first introduced in the USSR on January 13, 1934, by a decision of the Council of People's Commissars of the USSR. According to the UNESCO International Standard Classification of Education (ISCED),[1] for purposes of international educational statistics Candidate of Sciences is equivalent to PhD.

However, in order to become a full Professor, a Doctor of Sciences degree is required, in the same way that the Habilitation is required in Germany, as well as the PhD dissertation and in some cases a second book in the United States and the United Kingdom. On the other hand, Immigration New Zealand places both Candidate of Sciences and Doctor of Sciences at "Level 10" (Doctors Level, which is the highest level there).[2] Only holders of master's and specialist's degrees are eligible for Candidate of Sciences programs.[3]

In the United States the Doctor of Sciences and Candidate of Sciences degrees in mathematics, physics, chemistry, biology, and other sciences may be recognized by some universities as an equivalent to PhD, and holders of these degrees awarded in countries of the former Soviet Union and Russian Federation may work in many state and private universities and research establishments of the Federal government.

The highest attainable degree, one level higher than the Candidate of Sciences is the Doctor of Sciences, which is roughly analogous to the Habilitation in Germany, Poland, Austria and Switzerland and the Habilitation à diriger des recherches in France, as it is required for the rank of the full Professor, because one can only become a lecturer with a Kandidat degree (and not a full professor.)

Procedure for attaining the degree

The work on a dissertation is commonly carried out during a postgraduate study period called aspirantura. It is performed either within an educational institution (such as a university) or a scientific research institution (such as an institute of the Russian Academy of Sciences network). It can also be carried out without a direct connection to the academy. In exceptional cases, the Candidate of Sciences degree may be awarded on the basis of published scholarly works without writing a thesis. In experimental sciences the dissertation is based on an independent research project conducted under the supervision of a professor, the results of which must be published in at least three papers in peer-review scientific journals.

A necessary prerequisite is taking courses in philosophy and foreign language, and passing a qualifying examination called "candidate minimum". In the Soviet Union, the candidate minimum included exams in the specialty field of the "dissertant", in a foreign language of his/her choice and in scientific communism. In post-Soviet Russia and other post-Soviet states, the latter examination was replaced by the one in philosophy, and in Russia recently in the history and philosophy of science; in Ukraine it is still philosophy.

The dissertation is presented (defended) at the accredited educational or scientific institutions before a committee called the Scientific Council. The Council consists of about 20 members, who are the leading specialists (including the academicians) in the field of the dissertation and who have been selected and approved to serve on the Council. The summary of the dissertation must be published before public defense in the form of "autoreferat" in about 150-200 copies, and distributed to major research organizations and libraries. The seeker of the degree must have an official "research supervisor". The dissertation must be delivered together with official references of several reviewers, called "opponents". In a procedure called the "defense of the dissertation" the dissertation is summarized before the Commission, followed by speeches by the opponents or the reading of their references, and replies to the comments of the opponents and question of the Commission members by the aspirant.

If the defense is successful (66.6% majority of votes by the secret ballot voting by the members of the Council), it is recommended and later must be approved by the central statewide board called Higher Attestation Commission or "Vysshaya attestacionnaya komissiya" or VAK (or by similar authority in other applicable countries).[4]

In Czechoslovakia, the Candidate and Doctor of Sciences (Czech: Kаndidát věd, Slovak: Kаndidát vied) degrees were modeled precisely after the Soviet one by Law 60/1953 in 1953. Requirements to attain the degree were thus literally the same as in the USSR. Since all Czechoslovak top academic research institutions were dissolved after the Communist Putsch in 1948, the supreme academic authority was represented by the Czechoslovak Academy of Sciences, newly established in 1953. The degree could also be awarded by the Slovak Academy of Sciences and universities.

The abbreviation of the degree is CSc. (Latin: candidatus scientiarum), added behind the bearer's name and a comma.

There also have been other academic degrees in Czechoslovakia and its successional states, that incorporate the "Dr." abbreviation, e.g.

and others. These doctor degrees are not to be confused with a Ph.D., although its holders are addressed "doctor". Applicants need a master's degree (5 years +) or a comparable degree with excellent grades. This degree is stated before names and awarded after writing a rigorous thesis of 50.000 to 80.000 words and defending it at an viva voce and (rigorous) exam in at least 2-3 related fields of doctoral studies.

Granting CSc. was abolished in 1998 and replaced with Ph.D. or Th.D. (Czech: doktor) An applicant is required to have master's degree (or its equivalent, e.g. Engineer (Ing.) or Doctor of Medicine MUDr in technical and economic university programs), enroll in an approximately three-year post-graduate program and defend their dissertation before a panel of expert examiners appointed by the university.

Candidate was abolished in 1996 and replaced with PhD. (Slovak: doktor, in 1996-2002 officially in Latin: philosophiae doctor). Requirements are similar to the Czech system.

Since the medieval period, Polish tradition was to call Ph.D. equivalent as "doktor". Only for a short period of time between 1951-1958 the communist government tried to replace the title of "doktor" with "kandydat nauk" to follow the Soviet model.

Depending on the specialty of research in the dissertation, a candidate is awarded one of the following degrees:[7]

Some specialties permit the award of the candidate degree for several variants of branches of science, depending on the dominant subject area of the dissertation; e. g., specialty 02.00.04 (physical chemistry)[7] can be awarded the degree of candidate of physico-mathematical, technical, or chemical sciences. However, for each dissertation only one branch of science can be chosen.