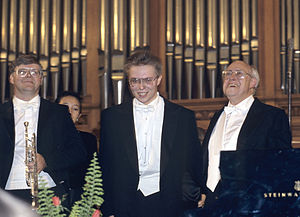 Ignat Aleksandrovich Solzhenitsyn (Russian: Игна́т Алекса́ндрович Солжени́цын; born 23 September 1972) is a Russian-American conductor and pianist who is the conductor laureate of the Chamber Orchestra of Philadelphia[1] and the principal guest conductor of the Moscow Symphony Orchestra.

Ignat Solzhenitsyn was born in Moscow in 1972, the middle son of the author Aleksandr Solzhenitsyn. He studied piano in London with Maria Curcio, the last and favourite pupil of Artur Schnabel, and then with Gary Graffman at the Curtis Institute, where he also majored in conducting under Otto-Werner Mueller.[2][3]

As conductor, Solzhenitsyn has led the symphonies of Baltimore, Buffalo, Dallas, Indianapolis, Nashville, New Jersey, North Carolina, Seattle, Toledo, and Toronto, the Nordwestdeutsche Philharmonie, as well as many of the major orchestras in Russia including the Mariinsky Orchestra, the St. Petersburg Philharmonic, the Moscow Philharmonic, the Moscow Symphony, and the Ural Philharmonic. He has partnered with such world-renowned soloists as Richard Goode, Gary Graffman, Steven Isserlis, Leila Josefowicz, Sylvia McNair, Garrick Ohlsson, Mstislav Rostropovich, and Mitsuko Uchida.

A winner of the Avery Fisher Career Grant, Ignat Solzhenitsyn serves on the piano faculty of the Curtis Institute of Music. He has been featured on many radio and television specials, including CBS Sunday Morning and ABC’s Nightline.

Solzhenitsyn resides in New York City with his wife and three children.[citation needed]