From Infogalactic: the planetary knowledge core
Jump to: navigation, search
For other uses, see Irkutsk (disambiguation). 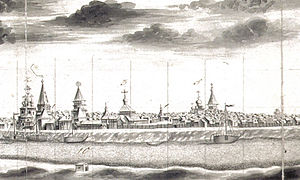 In 1652, Ivan Pokhabov built a zimovyo (winter quarters) near the site of Irkutsk for gold trading and for the collection of fur taxes from the Buryats. In 1661, Yakov Pokhabov built an ostrog nearby.[9] The ostrog gained official town rights from the government in 1686. The first road connection between Moscow and Irkutsk, the Siberian Road, was built in 1760, and benefited the town economy. Many new products, often imported from China via Kyakhta, became widely available in Irkutsk for the first time, including gold, diamonds, fur, wood, silk, and tea. In 1821, as part of the Speransky reforms, Siberia was administratively divided at the Yenisei River and Irkutsk became the seat of the Governor-General of East Siberia. 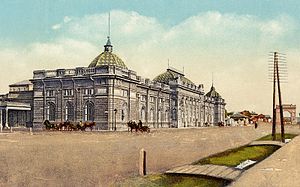 Irkutsk Assembly of the Nobility in the early 1900s

In the early 19th century, many Russian artists, officers, and nobles were sent into exile in Siberia for their part in the Decembrist revolt against Tsar Nicholas I. Irkutsk became the major center of intellectual and social life for these exiles, and much of the city's cultural heritage comes from them; many of their wooden houses, adorned with ornate, hand-carved decorations, survive today, in stark contrast with the standard Soviet apartment blocks that surround them. 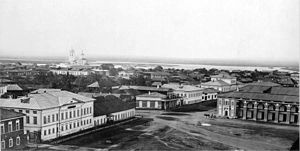 Epiphany Cathedral and central Irkutsk in 1865

By the end of the 19th century, there was one exiled man for every two locals. People of varying backgrounds, from members of the Decembrist uprising to Bolsheviks, have been in Irkutsk for many years and have greatly influenced the culture and development of the city. As a result, Irkutsk eventually became a prosperous cultural and educational center in Eastern Siberia.

In 1879, on July 4 and 6, the palace of the (then) Governor General, the principal administrative and municipal offices and many of the other public buildings were destroyed by fire, and the government archives, the library and the museum of the Siberian section of the Russian Geographical Society were completely ruined. Three-quarters of the city was destroyed, including approximately 4,000 houses. However, the city quickly rebounded, with electricity arriving in 1896, the first theater being built in 1897 and a major train station opened in 1898. The first train arrived in Irkutsk on August 16 of that year. By 1900, the city had earned the nickname of "The Paris of Siberia."

During the Russian Civil War, which broke out after the October Revolution, Irkutsk became the site of many furious, bloody clashes between the "Whites" and the "Reds". In 1920, Aleksandr Kolchak, the once-feared commander of the largest contingent of anti-Bolshevik forces, was executed in Irkutsk, which effectively destroyed the anti-Bolshevik resistance.

During the Communist years, the industrialization of Irkutsk and Siberia in general was heavily encouraged. The large Irkutsk Reservoir was built on the Angara River between 1950 and 1959 in order to facilitate industrial development. 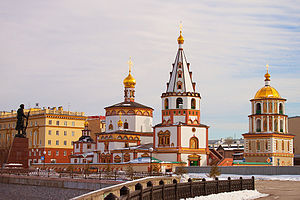 The Epiphany Cathedral (left), the governor's palace, a school of medicine, a museum, a military hospital and the crown factories are among the public institutions and buildings. The Aleksandr Kolchak monument, designed by Vyacheslav Klykov, was unveiled in 2004. On July 27, 2004, the Irkutsk Synagogue (1881) was gutted by a conflagration.

The city proper lies on the Angara River, a tributary of the Yenisei, 72 kilometers (45 mi) below its outflow from Lake Baikal and on the bank opposite the suburb of Glaskovsk. The river, 580-meter (1,900 ft) wide, is crossed by the Irkutsk Hydroelectric Dam and three other bridges downstream.

The Irkut River, from which the town takes its name, is a smaller river that joins the Angara directly opposite the city. The main portion of the city is separated from several landmarks—the monastery, the fort and the port, as well as its suburbs—by another tributary, the Ida (or Ushakovka) River. The two main parts of Irkutsk are customarily referred to as the "left bank" and the "right bank", with respect to the flow of the Angara River.

Irkutsk is situated in a landscape of rolling hills within the thick taiga that is typical in Eastern Siberia.

According to the regional plan, Irkutsk city will be combined with its neighboring industrial towns of Shelekhov and Angarsk to form a metropolitan area with a total population of over a million.

Irkutsk originally had a borderline subarctic climate (Köppen climate classification Dwc). Since 2000, the temperatures have resembled a humid continental climate (Köppen climate classification Dwb). Snow cover disappeared earlier, from late April in the 1930s to late March in the 1980s. Discontinuous permafrost depth had decreased from 200 m to 100 m during the same period.

Irkutsk is characterized by an extreme variation of temperatures between seasons. It can be very warm in the summer, and very cold in the winter. However, Lake Baikal has its effect, such that temperatures in Irkutsk are not as extreme as elsewhere in Siberia. The warmest month of the year in Irkutsk is July, when the average temperature is +18 °C (64 °F), the highest temperature recorded being +37.2 °C (99.0 °F). 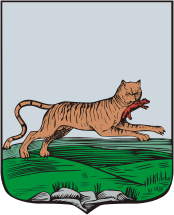 The original version of the coat of arms 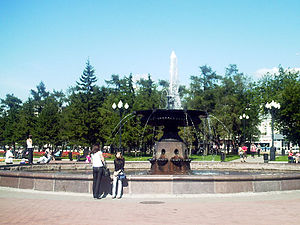 A fountain in Kirov Square

The coat of arms of Irkutsk features an old symbol of Dauria: a Siberian tiger with a sable in his mouth. When the coat of arms was devised in 1690, the animal was described as a tiger ("babr", a bookish word of Persian derivation) with a sable in his mouth. This image had been used by the Yakutsk customs office from about 1642. It has its origin in a seal of the Siberia Khanate representing a sable and showcasing the fact that Siberia (or rather Yugra) was the main source of sable fur throughout the Middle Ages. (Actually, the English word "sable" is derived from the Russian "sobol").

By the mid-19th century, the word "babr" had fallen out of common usage, but it was still recorded in the Armorial of the Russian Empire. Furthermore, the tigers became extinct in this part of Siberia. In the 1870s, a high-placed French heraldist with a limited command of Russian assumed that "babr" was a misspelling of "bobr", the Russian word for "beaver", and changed the wording accordingly. This modification engendered a long dispute between the local authorities, who were so confused by the revised description that they started to depict the "babr" as a fabulous animal, half-tiger and half-beaver.

The Soviets abolished the image altogether, but it was restored following the dissolution of the Soviet Union.

The 662.4 MW Irkutsk Hydroelectric Power Station was the first cascade hydroelectric power station in the Irkutsk region. The construction of the dam started in 1950 and finished in 1958.[16]

The largest industry in Irkutsk is Irkut, the Irkutsk Aviation Industrial Association,[17] which was set up in 1932 in the Transbaykal region of the Soviet Union. It is best known as being the manufacturer of the Su-30 family of interceptor/ground-attack aircraft. The Russian government is planning to merge Irkut with Ilyushin, Mikoyan, Sukhoi, Tupolev, and Yakovlev as a new company named United Aircraft Building Corporation.[18]

There is the Irkutsk Aluminium Smelter which belongs to the Rusal Company.[19] 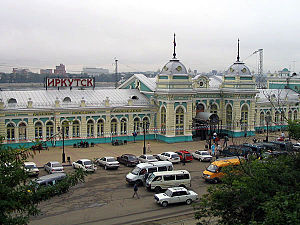 Important roads and railways like the Trans-Siberian Highway (Federal M53 and M55 Highways) and Trans-Siberian Railway connect Irkutsk to other regions in Russia and Mongolia. The city is also served by the Irkutsk International Airport and the smaller Irkutsk Northwest Airport.

The Federal road and railway to Moscow and Vladivostok pass through the other side of the Angara River from central Irkutsk.

Trams are one major mode of public transit in Irkutsk. Other modes are trolleybus, bus, and fixed-route taxi (marshrutka).

There are many state and privately-owned television stations in Irkutsk, including state company IGTRK[20] and private ones, such as AS Baikal TV,[21] TV company AIST,[22] TV company Gorod,[23] and also other media outlets, like the VSP Newspaper Agency.[24] There is also a live webcam broadcasting from the city center.[25]

Irkutsk has long been home to the well-known Russian writer Valentin Rasputin; many of his novels and stories take place in the Angara Valley. An essay on the cultural history of Irkutsk (and another one about the nearby Lake Baikal) is included in Rasputin's non-fiction collection Siberia, Siberia, which is also available in an English translation. 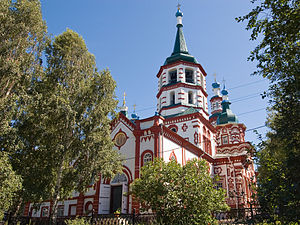 Irkutsk[27] is a point of interest for tourists with its numerous museums and old architecture. The Taltsy Museum (Russian: Тальцы), located on the Angara 47 kilometers (29 mi) South of Irkutsk, is an open-air museum of Siberian traditional architecture. Numerous old wooden buildings from villages in the Angara valley, which have been flooded after the construction of the Bratsk Dam and Ust-Ilimsk Dam, have been transported to the museum and reassembled there. One of the centerpieces of the collection is a partial recreation of the 17th-century ostrog (fortress) of Ilimsk, which consists of the original Spasskaya Tower and the Church of Our Lady of Kazan transported from the flooded ostrog in the mid-1970s, to which an exact modern copy of another tower of the ostrog and the Southern wall of the fortress were added in the early 2000s.[28]

The Botanic Garden of the Irkutsk State University known as the "Irkutsk Botanic Garden" is the only botanic garden as a living museum in Irkutsk Oblast and Baikalian Siberia. Its mission is "to protect and enrich the flora of the Lake Baikal area and the world for people through public education, collection, propagation, research, and conservation of plants". The garden is mainly an educational and scientific tool for the Irkutsk State University and maintains the largest plant collection of living plants in Eastern Siberia (more than 5000 plant taxa), a herbarium, and a seed bank. It occupies 27 hectares within Irkutsk city, 70 km (43 mi) West of Lake Baikal. It has a federal status of especially protected land and a nature memorial of Irkutsk.

Irkutsk is also home to several theaters, including the Okhlopkov Drama Theater, one of Russia's oldest.[29]

Bandy is a very big sport in the city. There are several clubs, most notably Baykal-Energiya[30] of the Russian Bandy Super League, which can draw spectator crowds of 30,000.[31] It is also the centre of women's bandy in Russia with the club Rekord,[32] which provides most players to the national team.[33] 2012 Women's Bandy World Championship[34] was hosted in Irkutsk and received praise from Federation of International Bandy.[35] 2014 Bandy World Championship was played in the city.[36][37]