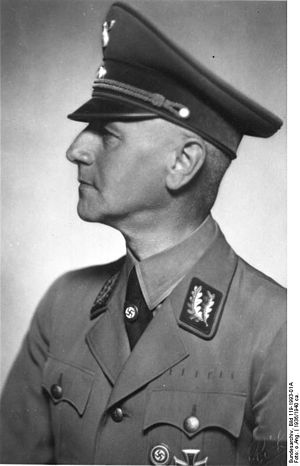 Joachim Albrecht Leo Eggeling (30 November 1884 – 15 April 1945) was the Nazi Gauleiter of Saxony and Anhalt and the High President (Oberpräsident) of the Province of Halle-Merseburg.

Eggeling was born in Blankenburg am Harz, Province of Saxony. A farmer's son, Eggeling went to the Bürgerschule (a type of vocational school once found in some parts of Germany) and the Gymnasium in Blankenburg. Between 1898 and 1904 he completed officer training at the cadet schools at Oranienstein and Groß-Lichterfelde.

In March 1904, Eggeling joined the army as an infantry lieutenant, and after August 1914, served in combat units during World War I. By 1915 he was promoted to captain and led a machine-gun unit.[1]

After November 1918, he fought as a member of the Goslar riflemen against the left-wing Marxist Spartacus League in Hanover.[2] In October 1919, he retired from the army, Eggeling completed studies at the age of 35 as an agriculturist and studied at the Agricultural College in Halle. In November 1922, he was administering the rural domain at Frose in Anhalt, and he also joined the Nazi Party (member number: 11579)[3] in July 1925.

In 1930, Eggeling organized the agrarian policy apparatus in the Gau of Saxony-Anhalt (not to be confused with the current state of Saxony-Anhalt), and in June 1933 he was appointed provincial agricultural leader (Landesbauernführer) of the provinces of Saxony and Anhalt.[3] Eggeling's skills so impressed his superiors that he was elected to the Reichstag for the NSDAP in the November 1933 elections.

After Gauleiter Wilhelm Friedrich Loeper's death on 23 October 1935, Eggeling was charged with the leadership of the Gau's business and owing to this, he was granted leave from his job as provincial agricultural leader in February 1936. In the same year, Eggeling joined the SS (membership number: 186515)[3] and was given the honorary rank of SS-Brigadeführer.

On 20 April 1937 came Eggeling's appointment as Gauleiter of Halle-Merseburg, succeeding Rudolf Jordan.[3] At the same time, he served as a Prussian state adviser and an SS-Gruppenführer.

In 1943, Eggeling was promoted to SS-Obergruppenführer, and on 18 August 1944 appointed High President of Merseburg. Convinced of the futility of defending the university town of Halle, with its thousands of refugees, from the advancing American troops, Eggeling committed suicide by shooting himself in April 1945. Before this, he had tried in vain to get Adolf Hitler to rescind his unconditional order to defend against the enemy. Eggeling died at Moritzburg Castle in Halle.