The War Merit Cross (German: Kriegsverdienstkreuz) was a decoration of Nazi Germany during the Second World War, which could be awarded to military personnel and civilians alike. By the end of the war it was issued in four degrees; and had a related civil decoration. It was reissued in 1957 by the Bundeswehr in a De-Nazified version for veterans.

This award was created by Adolf Hitler in 1939 as a successor to the non-combatant Iron Cross which was used in earlier wars (same medal but with a different ribbon). The award was graded the same as the Iron Cross: War Merit Cross Second Class, War Merit Cross First Class, and Knights Cross of the War Merit Cross. The award had two variants: with swords given to soldiers for exceptional service in battle above and beyond the call of duty (but not worthy of an Iron Cross which was more a bravery award), and without swords for meritorious service behind the lines which could also be awarded to civilians. Recipients had to have the lower grade of the award before getting the next level. 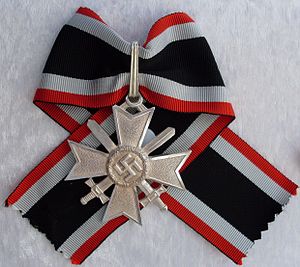 Knights Cross of the War Merit Cross with Swords

A total of 118 awards of the Knights Cross of the War Merit Cross with swords, and 137 awards without swords were awarded. Considering the relative rarity of the award compared with the grades of the Knights Cross of the Iron Cross, it took on extra meaning. The scarcity of the award gave it an "air of exclusiveness" it did not really deserve, as it ranked below the Knights Cross of the Iron Cross.For example, Reichsmarschall Hermann Göring made a concerted effort to get Hitler to award him this order, much to Hitler's annoyance. In response, Hitler outlined a series of criteria governing the awarding of this decoration and the philosophy of such awards, and directed that "prominent party comrades" were not to be awarded with the Knights Cross of the War Merit Cross (or similar decorations), and withdrew the proposed awards of this order to Gauleiter Erich Koch and State Secretary Karl Hanke. Directing his comments at Göring personally, Hitler ordered that such attempts to gain this award be stopped (from a letter dated 27 August 1943 from the Führerhauptquartier). 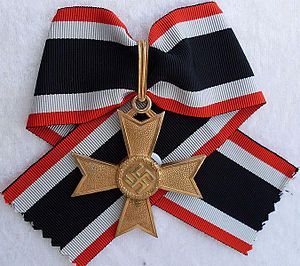 Knights Cross of the War Merit Cross in Gold (without Swords). Awarded only to Franz Hahne and Karl-Otto Saur

The wearing of Nazi era decorations was banned in Germany after the war, as was any display of the swastika. Veterans awarded the War Merit Cross were therefore unable to wear it, either in uniform or - publicly - on civilian dress. In 1957 the Federal Republic of Germany authorised alternative 'de-nazified' replacement versions of World War II period war decorations. These could be worn both on Bundeswehr uniform and in civilian dress. The new version of the War Merit Cross replaced the swastika on the obverse central disc of the cross with the date "1939" (as on the reverse disc of the original version), the reverse disc being blank. The wearing of Nazi era decorations in any form continued to be banned in the German Democratic Republic until German reunification in 1990.

Closely related to the War Merit Cross was the War Merit Medal (German: Kriegsverdienstmedaille), set up in 1940 for civilians in order to offset the large number of 2nd class without swords being awarded. It was usually given to those workers in factories who significantly exceeded work quotas. The War Merit Medal could also be awarded to women.