List of named corners of the Snaefell Mountain Course

More than 60 corners, bends and turns of the Snaefell Mountain Course, a racing circuit which has hosted motorcycle, sidecar, and automobile racing—including many world championship events—since 1911, are individually named and notable. The course runs 37.73 miles (60.72 km) entirely along public roads of the Isle of Man. This list includes prominent named corners and other landmarks along the course.

The number of turns in the course is subject to debate. All agree that there are more than 200; a 2011 report asserted there are 264.[1] Some of the curves, S-bends, turns at crossroads, and other features in the course would not seem significant to car drivers in public traffic, while they are very significant for high-speed racers. 132.701 mph (213.562 km/h) is the highest average speed over one lap of the course that has been attained, by John McGuinness on 12 June 2015.[2] At jumps where most motorcycle racers clear off the ground, drivers of cars at slow speeds might not even notice a bump. At the corners, racers must adjust their entering speed, focus on their pre-planned line and lean according to the nature of the turn, and anticipate accelerating, decelerating, turning again, or otherwise handling their vehicles as needed while coming out of the turn, for each one.

During race season there are marker boards, first introduced as banners in 1921,[3] posted in advance of major turns bearing these names that inform practice racers and during races may remind racers what is coming. The turns aren't labelled by numbers as done on other short racing circuits.

Spectators also focus on named corners as well as landmarks beside the course; many of the best vantage points are at turns where racers can be better-seen as they slow down.

As a guidebook for visitors to the Isle of Man describes:

While there exist named corners in other racing circuits, naming of corners elsewhere is usually less salient. For example, there is the notable "Dunlop Curve" of the 24 Hours of Le Mans' automobile race circuit and motorcycle race circuit. But the turns in many courses are primarily referred to by numbers, e.g. turns of the 1909-built Indianapolis Motor Speedway in the U.S. are referred to as Turn 1 through Turn 4. The Snaefell Mountain Course is one of the longer racing circuits and has more turns.

In common with corners on other circuits that are named, many are named after champion racers, and examples in the Snaefell course are Joey's Corner at the 26th Milestone, posthumously-named there to commemorate the 26 racing victories by racer Joey Dunlop on this course prior to his death racing in Estonia, and Hailwood's Rise/Hailwood's Height, named after famous rider Mike Hailwood, killed in a road traffic accident in central England. A change to the naming-convention occurred in 2013 when McGuinness's and Molyneux's were named in honour of living rider John McGuinness and sidecar driver Dave Molyneux, ranking second and third in the tally of TT race wins.[5]

Some corners in the Snaefell course are named for riders who suffered accidents at the corner or nearby: Doran's Bend after Bill Doran and Brandish Corner, after Walter Brandish. Others refer to the corner's physical shape: Verandah, The Nook. More take names of nearby artificial or natural landmarks: Creg-ny-Baa (a pub), Tower Bends, Bray Hill. Landmark-based names may continue to be used long after their namesake is gone: Keppel Gate, Signpost Corner. 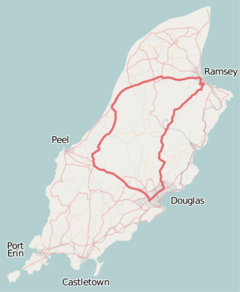 The roads serve two-way public traffic for most of the year, and are closed during practice times and races. For the entire racing season of several weeks, the mountain portion of the course (Ramsey towards Douglas) is restricted to one-way in the race direction, and parking is prohibited from various areas.[6] These and other provisions allow racers and visiting motorcyclists to learn the corners and practice on the course.

The following is a partial list of named corners and other landmarks along the course. Turns described as left- or right-handers assume that travel is in the race direction, which is clockwise around the circuit.