From Infogalactic: the planetary knowledge core
Jump to: navigation, search
This article is about a category of words. It is not to be confused with the comic character, called Onomatopoeia. 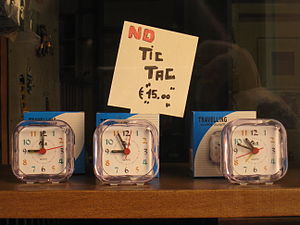 A sign in a shop window in Italy proclaims "No Tic Tac", in imitation of the sound of a clock.

i/ˌɒnoʊˌmætəˈpiːə, -ˌmɑː-/,[1][2] or chiefly NZ /-ˈpeɪə/; from the Greek ὀνοματοποιία;[3] ὄνομα for "name"[4] and ποιέω for "I make",[5] adjectival form: "onomatopoeic" or "onomatopoetic") is a word that phonetically imitates, resembles or suggests the source of the sound that it describes. Onomatopoeia (as an uncountable noun) refers to the property of such words. Common occurrences of onomatopoeias include animal noises such as "oink", "miaow" (or "meow"), "roar" or "chirp". Onomatopoeias are not the same across all languages; they conform to some extent to the broader linguistic system they are part of;[6][7] hence the sound of a clock may be tick tock in English, dī dā in Mandarin, or katchin katchin in Japanese, or "tik-tik" (टिक-टिक) in Hindi.

Although in the English language the term onomatopoeia means the imitation of a sound, in the Greek language the compound word onomatopoeia (ονοματοποιία) means "making or creating names". For words that imitate sounds, the term Ηχομιμητικό (echomimetico or echomimetic) is used. Ηχομιμητικό (echomimetico) derives from Ηχώ, meaning "echo or sound", and μιμητικό, meaning "mimetic or imitation".

In the case of a frog croaking, the spelling may vary because different frog species around the world make different sounds: Ancient Greek brekekekex koax koax (only in Aristophanes' comic play The Frogs) for probably marsh frogs; English ribbit for species of frog found in North America; English verb croak for the common frog.[8]

Some other very common English-language examples include hiccup, zoom, bang, beep, moo, and splash. Machines and their sounds are also often described with onomatopoeia, as in honk or beep-beep for the horn of an automobile, and vroom or brum for the engine. When someone speaks of a mishap involving an audible arcing of electricity, the word "zap" is often used (and has subsequently been expanded and used to describe non-auditory effects generally connoting the same sort of localized but thorough interference or destruction similar to that produced in short-circuit sparking).

For animal sounds, words like quack (duck), moo (cow), bark or woof (dog), roar (lion), meow/miaow or purr (cat), cluck (chicken) and baa (sheep) are typically used in English. Some of these words are used both as nouns and as verbs.

Some languages flexibly integrate onomatopoeic words into their structure. This may evolve into a new word, up to the point that it is no longer recognized as onomatopoeia. One example is English "bleat" for the sheep noise: in medieval times it was pronounced approximately as "blairt" (but without an R-component), or "blet" with the vowel drawled, which is much more accurate as onomatopoeia than the modern pronunciation.

An example of the opposite case is "cuckoo", which, due to continuous familiarity with the bird noise down the centuries, has kept approximately the same pronunciation as in Anglo-Saxon times and its vowels have not changed as they have in the word "furrow".

Verba dicendi are a method of integrating onomatopoeia and ideophones into grammar.

Sometimes things are named from the sounds they make. In English, for example, there is the universal fastener which is named for the onomatopoeic of the sound it makes: the zip (in the UK) or zipper (in the U.S.). Many birds are named after their calls, such as the bobwhite quail, the weero, the morepork, the killdeer, chickadee, the cuckoo, the chiffchaff, the whooping crane, the whip-poor-will, and the kookaburra. In Tamil and Malayalam, the word for crow is kaakaa. This practice is especially common in certain languages such as Māori and, therefore, in names of animals borrowed from these languages.

Although a particular sound is heard similarly by people of different cultures, it is often expressed through the use of different consonant strings in different languages. For example, the "snip" of a pair of scissors is su-su in Chinese[citation needed], cri-cri in Italian, riqui-riqui in Spanish, terre-terre or treque-treque in Portuguese, krits-krits in modern Greek and katr-katr in Hindi.[9] Similarly, the "honk" of a car's horn is ba-ba (Han: 叭叭) in Mandarin, tut-tut in French, pu-pu in Japanese, bbang-bbang in Korean, bært-bært in Norwegian, fom-fom in Portuguese and bim-bim in Vietnamese.

Onomatopoeic effect can also be produced in a phrase or word string with the help of alliteration and consonance alone, without using any onomatopoeic words. The most famous example is the phrase "furrow followed free" in Samuel Taylor Coleridge's The Rime of the Ancient Mariner. It may be noted that the words "followed" and "free" are not onomatopoeic in themselves, but in conjunction with "furrow", they reproduce the sound of ripples following in the wake of a speeding ship. Similarly, alliteration has been used in the line "as the surf surged up the sun swept shore...", to recreate the sound of breaking waves, in the poem "I, She and the Sea".

Comic strips and comic books made extensive use of onomatopoeia. Popular culture historian Tim DeForest noted the impact of writer-artist Roy Crane (1901–1977), the creator of Captain Easy and Buz Sawyer:

It was Crane who pioneered the use of onomatopoeic sound effects in comics, adding "bam," "pow" and "wham" to what had previously been an almost entirely visual vocabulary. Crane had fun with this, tossing in an occasional "ker-splash" or "lickety-wop" along with what would become the more standard effects. Words as well as images became vehicles for carrying along his increasingly fast-paced storylines.[10]

Advertising uses onomatopoeia as a mnemonic, so consumers will remember their products, as in Alka-Seltzer's "Plop, plop, fizz, fizz. Oh, what a relief it is!" jingle, recorded in two different versions (big band and rock) by Sammy Davis, Jr.

Rice Krispies (US and UK) and Rice Bubbles (AU) make a "snap, crackle, pop" when one pours on milk. During the 1930s, the illustrator Vernon Grant developed Snap, Crackle and Pop as gnome-like mascots for the Kellogg Company.

In many of the world's languages, onomatopoeia-like words are used to describe phenomena apart from the purely auditive. Japanese often utilizes such words to describe feelings or figurative expressions about objects or concepts. For instance, Japanese barabara is used to reflect an object's state of disarray or separation, and shiiin is the onomatopoetic form of absolute silence (used at the time an English speaker might expect to hear the sound of crickets chirping or a pin dropping in a silent room, or someone coughing). It is used in English as well with terms like bling, which describes the glinting of light on things like gold, chrome or precious stones. In Japanese, kirakira is used for glittery things.