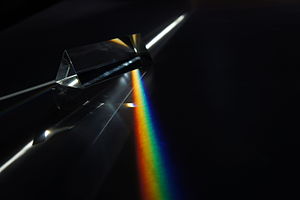 Dispersion of light (photons) by a prism.

Photonics is the science of light (photon) generation, detection, and manipulation through emission, transmission, modulation, signal processing, switching, amplification, and detection/sensing.[1][2] Though covering all light's technical applications over the whole spectrum, most photonic applications are in the range of visible and near-infrared light. The term photonics developed as an outgrowth of the first practical semiconductor light emitters invented in the early 1960s and optical fibers developed in the 1970s.

The word 'photonics' is derived from the Greek word "photos" meaning light; it appeared in the late 1960s to describe a research field whose goal was to use light to perform functions, that traditionally fell within the typical domain of electronics, such as telecommunications, information processing, etc.

Photonics as a field began with the invention of the laser in 1960. Other developments followed: the laser diode in the 1970s, optical fibers for transmitting information, and the erbium-doped fiber amplifier. These inventions formed the basis for the telecommunications revolution of the late 20th century and provided the infrastructure for the Internet.

Though coined earlier, the term photonics came into common use in the 1980s as fiber-optic data transmission was adopted by telecommunications network operators. At that time, the term was used widely at Bell Laboratories. Its use was confirmed when the IEEE Lasers and Electro-Optics Society established an archival journal named Photonics Technology Letters at the end of the 1980s.

During the period leading up to the dot-com crash circa 2001, photonics as a field focused largely on optical telecommunications. However, photonics covers a huge range of science and technology applications, including laser manufacturing, biological and chemical sensing, medical diagnostics and therapy, display technology, and optical computing. Further growth of photonics is likely if current silicon photonics developments are successful.

Relationship to other fields

Photonics is closely related to optics. Classical optics long preceded the discovery that light is quantized, when Albert Einstein famously explained the photoelectric effect in 1905. Optics tools include the refracting lens, the reflecting mirror, and various optical components and instruments developed throughout the 15th to 19th centuries. Key tenets of classical optics, such as Huygens Principle, developed in the 17th century, Maxwell's Equations and the wave equations, developed in the 19th, do not depend on quantum properties of light.

Photonics is related to quantum optics, optomechanics, electro-optics, optoelectronics and quantum electronics. However, each area has slightly different connotations by scientific and government communities and in the marketplace. Quantum optics often connotes fundamental research, whereas photonics is used to connote applied research and development.

The term optoelectronics connotes devices or circuits that comprise both electrical and optical functions, i.e., a thin-film semiconductor device. The term electro-optics came into earlier use and specifically encompasses nonlinear electrical-optical interactions applied, e.g., as bulk crystal modulators such as the Pockels cell, but also includes advanced imaging sensors typically used for surveillance by civilian or government organizations.

Photonics also relates to the emerging science of quantum information and quantum optics, in those cases where it employs photonic methods. Other emerging fields include optomechanics, which involves the study of the interaction between light and mechanical vibrations of mesoscopic or macroscopic objects; opto-atomics, in which devices integrate both photonic and atomic devices for applications such as precision timekeeping, navigation, and metrology; polaritonics, which differs from photonics in that the fundamental information carrier is a polariton, which is a mixture of photons and phonons, and operates in the range of frequencies from 300 gigahertz to approximately 10 terahertz. 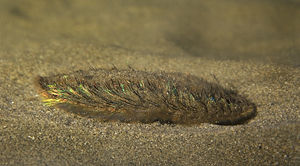 The science of photonics includes investigation of the emission, transmission, amplification, detection, and modulation of light.

Light can be transmitted through any transparent medium. Glass fiber or plastic optical fiber can be used to guide the light along a desired path. In optical communications optical fibers allow for transmission distances of more than 100 km without amplification depending on the bit rate and modulation format used for transmission. A very advanced research topic within photonics is the investigation and fabrication of special structures and "materials" with engineered optical properties. These include photonic crystals, photonic crystal fibers and metamaterials.

Photodetectors detect light. Photodetectors range from very fast photodiodes for communications applications over medium speed charge coupled devices (CCDs) for digital cameras to very slow solar cells that are used for energy harvesting from sunlight. There are also many other photodetectors based on thermal, chemical, quantum, photoelectric and other effects.

An additional topic covered by modulation research is the modulation format. On-off keying has been the commonly used modulation format in optical communications. In the last years more advanced modulation formats like phase-shift keying or even orthogonal frequency-division multiplexing have been investigated to counteract effects like dispersion that degrade the quality of the transmitted signal.

Photonic integrated circuits (PICs) are optically active integrated semiconductor photonic devices which consist of at least two different functional blocks, (gain region and a grating based mirror in a laser...). These devices are responsible for commercial successes of optical communications and the ability to increase the available bandwidth without significant cost increases to the end user, through improved performance and cost reduction that they provide. The most widely deployed PICs are based on Indium phosphide material system. Silicon photonics is an active area of research.