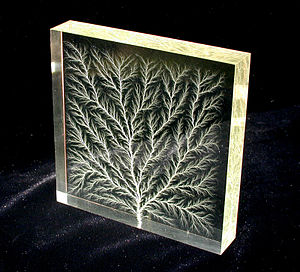 Poly(methyl methacrylate) (PMMA), also known as acrylic or acrylic glass as well as by the trade names Plexiglas, Acrylite, Lucite, and Perspex among several others (see below), is a transparent thermoplastic often used in sheet form as a lightweight or shatter-resistant alternative to glass. The same material can be utilised as a casting resin, in inks and coatings, and has many other uses.

Although not a type of familiar silica-based glass, the substance, like many thermoplastics, is often technically classified as a type of glass (in that it is a non-crystalline vitreous substance) hence its occasional historic designation as acrylic "glass". Chemically, it is the synthetic polymer of methyl methacrylate. The material was developed in 1928 in several different laboratories by many chemists such as William Chalmers, Otto Röhm and Walter Bauer and was first brought to market in 1933 by the Rohm and Haas Company under the trademark Plexiglas.

PMMA is an economical alternative to polycarbonate (PC) when extreme strength is not necessary. Additionally, PMMA does not contain the potentially harmful bisphenol-A subunits found in polycarbonate. It is often preferred because of its moderate properties, easy handling and processing, and low cost. Non-modified PMMA behaves in a brittle manner when under load, especially under an impact force, and is more prone to scratching than conventional inorganic glass, but modified PMMA is sometimes able to achieve high scratch and impact resistance.

The first acrylic acid was created in 1843. Methacrylic acid, derived from acrylic acid, was formulated in 1865. The reaction between methacrylic acid and methanol results in the ester methyl methacrylate. In 1877 the German chemist Wilhelm Rudolph Fittig discovered the polymerization process that turns methyl methacrylate into polymethyl methacrylate. In 1933, the brand name "Plexiglas" was patented and registered by another German chemist, Otto Röhm. In 1936 Imperial Chemical Industries (now Lucite International) began the first commercially viable production of acrylic safety glass. During World War II both Allied and Axis forces used acrylic glass for submarine periscopes and aircraft windshields, canopies, and gun turrets. Airplane pilots whose eyes were damaged by flying shards of PMMA fared much better than those injured by standard glass, demonstrating the much-increased compatibility between human tissue and PMMA as compared to glass.[4]

Common orthographic stylings include polymethyl methacrylate[5][6] and polymethylmethacrylate. The full chemical name is poly(methyl 2-methylpropenoate). (It is a common mistake to use "an" instead of "en".)

Although often called simply "acrylic", acrylic can also refer to other polymers or copolymers containing polyacrylonitrile. The other notable trade names include:

The glass transition temperature (Tg) of atactic PMMA is 105 °C (221 °F). The Tg values of commercial grades of PMMA range from 85 to 165 °C (185 to 329 °F); the range is so wide because of the vast number of commercial compositions which are copolymers with co-monomers other than methyl methacrylate. PMMA is thus an organic glass at room temperature; i.e., it is below its Tg. The forming temperature starts at the glass transition temperature and goes up from there.[13] All common molding processes may be used, including injection molding, compression molding, and extrusion. The highest quality PMMA sheets are produced by cell casting, but in this case, the polymerization and molding steps occur concurrently. The strength of the material is higher than molding grades owing to its extremely high molecular mass. Rubber toughening has been used to increase the toughness of PMMA owing to its brittle behavior in response to applied loads.

PMMA can be joined using cyanoacrylate cement (commonly known as superglue), with heat (welding), or by using solvents such as di- or trichloromethane[14] to dissolve the plastic at the joint, which then fuses and sets, forming an almost invisible weld. Scratches may easily be removed by polishing or by heating the surface of the material.

Laser cutting may be used to form intricate designs from PMMA sheets. PMMA vaporizes to gaseous compounds (including its monomers) upon laser cutting, so a very clean cut is made, and cutting is performed very easily. However, the pulsed lasercutting introduces high internal stresses along the cut edge, which on exposure to solvents produce undesirable "stress-crazing" at the cut edge and several millimetres deep. Even ammonium-based glass-cleaner and almost everything short of soap-and-water produces similar undesirable crazing, sometimes over the entire surface of the cut parts, at great distances from the stressed edge.[15] Annealing the PMMA sheet/parts is therefore an obligatory post-processing step when intending to chemically bond lasercut parts together. This involves heating the parts in an air circulating oven from room temperature up to 90 °C (at a rate of no more than 18 degrees per hour) down to room temperature (at a rate of no more than 12 degrees per hour). Temperature should be maintained as follows: one hour for 3 mm thickness, two hours for up to 6 mm thickness, four hours for up to 12 mm thickness, and six hours for up to 20 mm thickness. A rapid annealing cycle is reliable for thin sheets and involves placing them in a pre-heated oven to 80 °C for one hour, then removing parts from the oven and allowing to cool to room temperature. This added time component should be factored into the whole fabrication process, and the alternative Zero-rake sawcutting technique may provide better cost-effectiveness, unless complex non-straight line edges are required. In this respect PMMA has an advantage over competing polymers such as polystyrene and polycarbonate, which require higher laser powers and give more messy and charred laser cuts.

In the majority of applications, it will not shatter. Rather, it breaks into large dull pieces. Since PMMA is softer and more easily scratched than glass, scratch-resistant coatings are often added to PMMA sheets to protect it (as well as possible other functions). 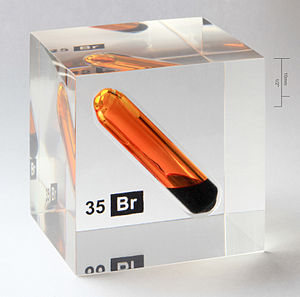 Illustrative and secure bromine chemical sample used for teaching. The sample vial of corrosive and poisonous liquid has been cast into an acrylic plastic cube

Methyl methacrylate "synthetic resin" for casting (simply the bulk liquid chemical) may be used in conjunction with a polymerization catalyst such as MEKP, to produce hardened transparent PMMA in any shape, from a mold. Objects like insects or coins, or even dangerous chemicals in breakable quartz ampules, may be embedded in such "cast" blocks, for display and safe handling.

Skeletal structure of methyl methacrylate, the constituent monomer of PMMA

PMMA is a strong and lightweight material. It has a density of 1.17–1.20 g/cm3,[1][16] which is less than half that of glass.[1] It also has good impact strength, higher than both glass and polystyrene; however, PMMA's impact strength is still significantly lower than polycarbonate and some engineered polymers. PMMA ignites at 460 °C (860 °F) and burns, forming carbon dioxide, water, carbon monoxide and low-molecular-weight compounds, including formaldehyde.[17]

PMMA transmits up to 92% of visible light (3 mm thickness), and gives a reflection of about 4% from each of its surfaces due to its refractive index (1.4905 at 589.3 nm).[2] It filters ultraviolet (UV) light at wavelengths below about 300 nm (similar to ordinary window glass). Some manufacturers[18] add coatings or additives to PMMA to improve absorption in the 300–400 nm range. PMMA passes infrared light of up to 2,800 nm and blocks IR of longer wavelengths up to 25,000 nm. Colored PMMA varieties allow specific IR wavelengths to pass while blocking visible light (for remote control or heat sensor applications, for example).

PMMA swells and dissolves in many organic solvents; it also has poor resistance to many other chemicals due to its easily hydrolyzed ester groups. Nevertheless, its environmental stability is superior to most other plastics such as polystyrene and polyethylene, and PMMA is therefore often the material of choice for outdoor applications.[19]

Pure poly(methyl methacrylate) homopolymer is rarely sold as an end product, since it is not optimized for most applications. Rather, modified formulations with varying amounts of other comonomers, additives, and fillers are created for uses where specific properties are required. For example,

The polymer of methyl acrylate, PMA or poly(methyl acrylate), is similar to poly(methyl methacrylate), except for the lack of methyl groups on the backbone carbon chain.[22] PMA is a soft white rubbery material that is softer than PMMA because its long polymer chains are thinner and smoother and can more easily slide past each other.

Being transparent and durable, PMMA is a versatile material and has been used in a wide range of fields and applications such as: rear-lights and instrument clusters for vehicles, appliances and lenses for glasses. PMMA in the form of sheets affords shatter resistant panels for building windows, skylights, bullet proof security barriers, signs & displays, sanitary ware (bathtubs), LCD screens, furniture and many other applications. It is also used for coating polymers based on MMA provides outstanding stability against environmental conditions with reduced emission of VOC. Methacrylate polymers are used extensively in medical and dental applications where purity and stability are critical to performance.[citation needed] 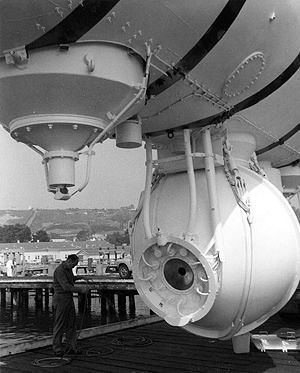 Close-up of pressure sphere of Bathyscaphe Trieste, with single conical window of PMMA (Plexiglas) set into sphere hull. The very small black circle (smaller than the man's head) is the inner side of the plastic "window," and is only a few inches in diameter. The larger circular clear black area represents the larger outer-side of the thick one-piece plastic cone "window." 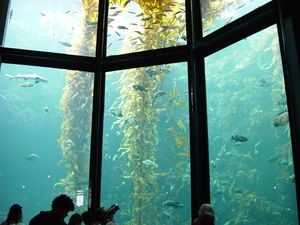 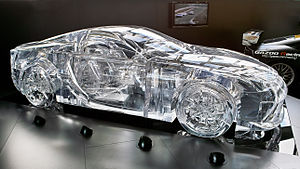 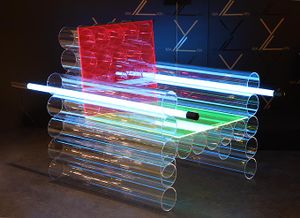 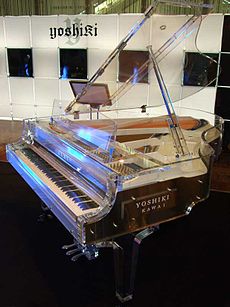 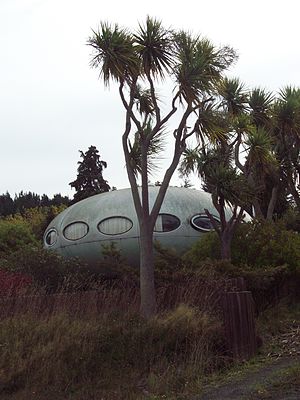 The Futuro house was made of fibreglass-reinforced polyester plastic, polyester-polyurethane, and poly(methylmethacrylate); one of them was found to be degrading by cyanobacteria and Archaea.[45][46]