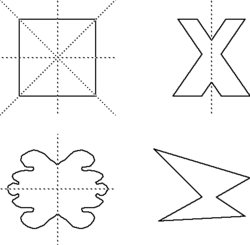 Figures with the axes of symmetry drawn in. The figure with no axes is asymmetric.

In 2D there is a line of symmetry, in 3D a plane of symmetry. An object or figure which is indistinguishable from its transformed image is called mirror symmetric. 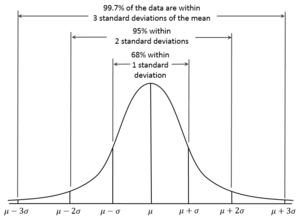 A normal distribution bell curve is an example symmetric function

Another way to think about the symmetric function is that if the shape were to be folded in half over the axis, the two halves would be identical: the two halves are each other's mirror images.[1]

For an arbitrary shape, the axiality of the shape measures how close it is to being bilaterally symmetric. It equals 1 for shapes with reflection symmetry, and between 2/3 and 1 for any convex shape.

For each line or plane of reflection, the symmetry group is isomorphic with Cs (see point groups in three dimensions), one of the three types of order two (involutions), hence algebraically C2. The fundamental domain is a half-plane or half-space.

In certain contexts there is rotational as well as reflection symmetry. Then mirror-image symmetry is equivalent to inversion symmetry; in such contexts in modern physics the term parity or P-symmetry is used for both. 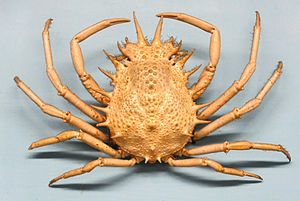 Many animals, such as this spider crab Maja crispata, are bilaterally symmetric.
Main article: Bilateral symmetry 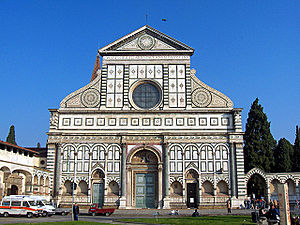 Mirror symmetry is often used in architecture, as in the facade of Santa Maria Novella, Venice, 1470.
Main article: Mathematics and architecture

Mirror symmetry is often used in architecture, as in the facade of Santa Maria Novella, Venice.[7] It is also found in the design of ancient structures such as Stonehenge.[8] Symmetry was a core element in some styles of architecture, such as Palladianism.[9]