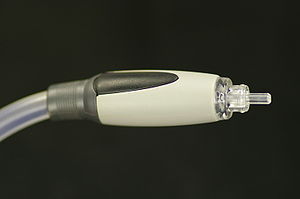 S/PDIF (Sony/Philips Digital Interface Format) is a type of digital audio interconnect used in consumer audio equipment to output audio over reasonably short distances. The signal is transmitted over either a coaxial cable with RCA connectors or a fibre optic cable with TOSLINK connectors. S/PDIF interconnects components in home theatres and other digital high fidelity systems.

S/PDIF is based on the professional AES3 interconnect standard.[1] S/PDIF can carry two channels of uncompressed PCM audio or compressed 5.1/7.1 surround sound (such as DTS audio codec); it cannot support lossless formats (such as Dolby TrueHD and DTS-HD Master Audio) which require greater bandwidth like that available with HDMI or DisplayPort.

S/PDIF is a data link layer protocol and a set of physical layer specifications for carrying digital audio signals between devices and components over either optical or electrical cable. The name stands for Sony/Philips Digital Interconnect Format but is also known as Sony/Philips Digital Interface. Sony and Philips were the primary designers of S/PDIF. S/PDIF is standardised in IEC 60958 as IEC 60958 type II (IEC 958 before 1998).[2]

A common use for the S/PDIF interface is to carry compressed digital audio for surround sound as defined by the standard IEC 61937. This mode is used to connect the output of a DVD player or computer, via optical or coax, to a home-theatre amplifying receiver that supports Dolby Digital or DTS. Another common use is to carry two channels of uncompressed digital audio from a CD player to an amplifying receiver.

S/PDIF was developed at the same time as the main standard, AES3, used to interconnect professional audio equipment in the professional audio field. This resulted from the desire of the various standards committees to have at least sufficient similarities between the two interfaces to allow the use of the same, or very similar, designs for interfacing ICs.[3] S/PDIF remained almost identical at the protocol level,[lower-alpha 1] but changed the physical connectors from XLR to either electrical coaxial cable (with RCA connectors) or optical fibre (TOSLINK; i.e., F05 or EIAJ Optical), both of which cost less than the XLR connection. The RCA connectors are typically colour-coded orange to differentiate from other RCA connector uses such as composite video. The cable was also changed from 110 Ω balanced twisted pair to 75 Ω coaxial cable, using RCA jacks.

S/PDIF is used to transmit digital signals of a number of formats, the most common being the 48 kHz sample rate format (used in DAT) and the 44.1 kHz format, used in CD audio. In order to support both systems, as well as others that might be needed, the format has no defined data rate. Instead, the data is sent using biphase mark code, which has either one or two transitions for every bit, allowing the original word clock to be extracted from the signal itself.

S/PDIF is meant to be used for transmitting 20-bit audio data streams plus other related information. To transmit sources with less than 20 bits of sample accuracy, the superfluous bits will be set to zero. S/PDIF can also transport 24-bit samples by way of four extra bits; however, not all equipment supports this, and these extra bits may be ignored.

Bits 8–14 of the control code are a 7-bit category code indicating the type of source equipment, and bit 15 is the "L-bit", which (for most category codes) indicates whether copy-restricted audio is original (may be copied once) or a copy (does not allow recording again). The L-bit is only used if bit 2 is zero, meaning copy-restricted audio. The L-bit polarity depends on the category, with recording allowed if it is 1 for DVD-R and DVR-RW, but 0 for CD-R, CD-RW, and DVD. For plain CD-DA (ordinary nonrecordable CDs), the L-bit is not defined, and recording is prevented by alternating bit 2 at a rate of 4–10 Hz.

The receiver does not control the data rate, so it must avoid bit slip by synchronising its reception with the source clock. Many S/PDIF implementations cannot fully decouple the final signal from influence of the source or the interconnect. Specifically the process of clock recovery used to synchronize reception may produce jitter.[6][7][8] If the DAC does not have a stable clock reference then noise will be introduced into the resulting analogue signal. However, receivers can implement various strategies which limit this influence.[8][9]

S/PDIF is unidirectional, so it lacks flow control and retransmission facilities. This limits its utility in data communications.