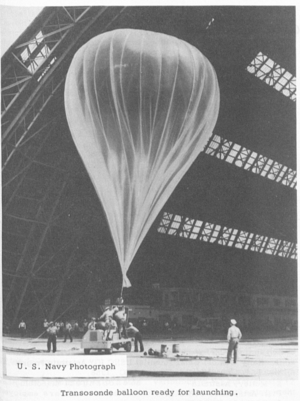 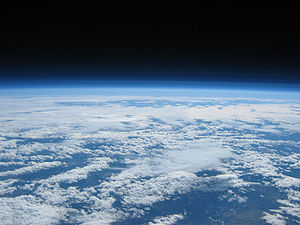 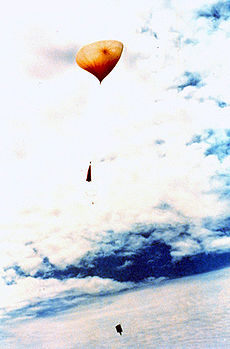 Rawinsonde weather balloon just after launch. Notice a parachute in the center of the string and a small instrument box at the end. After release it measures many parameters. These include temperature, relative humidity, pressure, and wind speed and wind direction. This information is transmitted back to surface observers.

A weather or sounding balloon is a balloon (specifically a type of high altitude balloon) which carries instruments aloft to send back information on atmospheric pressure, temperature, humidity and wind speed by means of a small, expendable measuring device called a radiosonde. To obtain wind data, they can be tracked by radar, radio direction finding, or navigation systems (such as the satellite-based Global Positioning System, GPS). Balloons meant to stay at a constant altitude for long periods of time are known as transosondes.

One of the first people to use weather balloons was Léon Teisserenc de Bort, the French meteorologist. Starting in 1896 he launched hundreds of weather balloons from his observatory in Trappes, France. These experiments lead to his discovery of the tropopause and stratosphere.[1] Transosondes, weather balloons with instrumentation meant to stay at a constant altitude for long periods of time to help diagnose radioactive debris from atomic fallout, were experimented with in 1958.[2]

The balloon itself produces the lift, and is usually made of a highly flexible latex material, though Chloroprene may also be used. The unit that performs the actual measurements and radio transmissions hangs at the lower end of the string, and is called a radiosonde. Specialized radiosondes are used for measuring particular parameters, such as determining the ozone concentration. An example of specialized measurements is found in the Tethered Balloon Measurements in Cyprus in 2003, as part of the Preliminary Evaluation of Air Quality in Cyprus,.[3]

The balloon is usually filled with hydrogen due to lower cost, though helium can also be used. The ascent rate can be controlled by the amount of gas with which the balloon is filled. Weather balloons may reach altitudes of 40 km (25 miles) or more, limited by diminishing pressures causing the balloon to expand to such a degree (typically by a 100:1 factor) that it disintegrates. In this instance the instrument package is usually lost.[4] Above that altitude sounding rockets are used, and for even higher altitudes satellites are used. 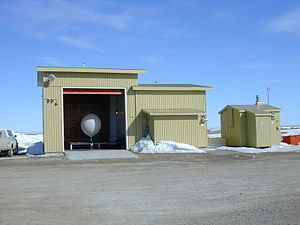 Weather balloons are launched around the world for observations used to diagnose current conditions as well as by human forecasters and computer models for weather forecasting. About 800[5] locations around the globe do routine releases, twice daily, usually at 0000 UTC and 1200 UTC. Some facilities will also do occasional supplementary "special" releases when meteorologists determine there is a need for additional data between the 12-hour routine launches in which time much can change in the atmosphere. Military and civilian government meteorological agencies such as the National Weather Service in the US typically launch balloons, and by international agreements almost all the data are shared with all nations.

Specialized uses also exist, such as for aviation interests, pollution monitoring, photography or videography and research. Examples include pilot balloons (Pibal). Field research programs often use mobile launchers from land vehicles as well as ships and aircraft (usually dropsondes in this case). In recent years weather balloons have also been used for scattering human ashes at high-altitude by companies such as Stardust Ashes, founded by Chester Mojay-Sinclare.[6]