From Infogalactic: the planetary knowledge core
Jump to: navigation, search
This article is about the mountain. For the Islamic day of fasting prior to Eid-al-Adha, see Day of Arafa. 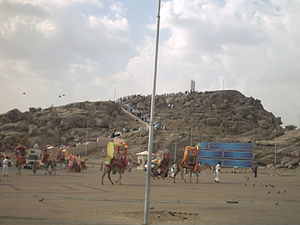 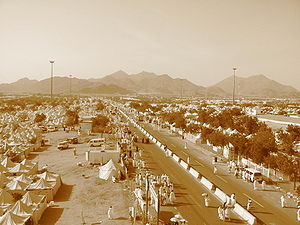 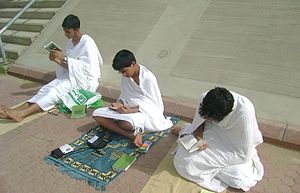 Pilgrims supplicating on the Plains of Arafat

Mount Arafat or Mount Arafah (Arabic: جبل عرفات‎‎ transliterated Jabal ‘Arafāt) is a granite hill east of Mecca in the plain of Arafat. Arafat is a plain about 20 km Southeast of Mecca.[1] Mount Arafat reaches about 70 m in height and also known as the Mount of Mercy (Jabal ar-Rahmah). According to Islamic tradition, the hill is the place where the Islamic prophet Muhammad stood and delivered the Farewell Sermon to the Muslims who had accompanied him for the Hajj towards the end of his life. On the 9th of the month of Dhu al-Hijjah pilgrims go to Arafat from Mina, for the most important part of the Hajj. Here the Khutbah of Hajj is narrated and Zuhr prayer and Asr prayer are prayed together. The pilgrims spend the whole day on `Arafah supplicating to Allah to forgive their sins and praying for personal strength in the future.

Arafah rituals end at sunset and pilgrims then move to Muzdalifah for shortened Maghrib Prayer and `Isha’prayers and for a short rest.

The level area surrounding the hill is called the Plain of Arafat. The term Mount `Arafah is sometimes applied to this entire area. It is an important place in Islam because during the Ḥajj, pilgrims spend the afternoon there on the ninth day of Dhul Hijjah (ذو الحجة). Failure to be present in the plain of Arafat on the required day invalidates the pilgrimage.

Since late 2010, this place is served by Mecca Metro. On a Normal Hajj the Mount would be around thirteen miles to walk.