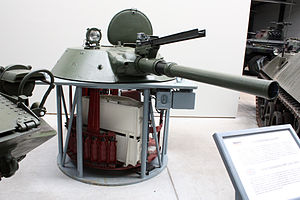 The 2A28 Grom is the main armament of the BMP-1 and BMD-1 infantry fighting vehicles. It is a 73 mm low pressure smoothbore semi-automatic gun with a wedge breechblock.

The gun is relatively compact and weighs 115 kilograms (254 lb). In the BMP, the gun is brought to bear by an electric motor, with a manual mechanical backup. The maximum horizontal and vertical traverse speed with the electrical system is 20 °/s and 6 °/s respectively. Minimum horizontal and vertical direction rate is correspondingly 0.1 °/s and 0.07 °/s. The gun can be depressed and elevated between −4° and +33°, with aimed fire possible up to an elevation of +15°. The turret can traverse 360°.[1] Cyclic rate of fire is between 8 and 10 rounds per minute, with the gun returning to an elevation of +3° 30' to reload after each shot if the autoloader is used.

It is fed from a forty round mechanized conveyor double-row magazine located around the turret ring of the BMP. The gun is reloaded by the M3 electromechanical autoloader with ammunition conveyor, but can be reloaded by hand if necessary. The autoloader is not reliable; it can break down from vibration when the vehicle is moving at high speed over rough ground, and its operation is a danger to the gunner's fingers. Using the autoloader, the gun has a rate of fire of 6–8 rounds per minute, while a skilled gunner could easily achieve 10 rounds per minute. These drawbacks caused the autoloader to be removed in Ob'yekt 765Sp3, Finnish BMP-1 and Swedish Pbv 501. Some units removed the autoloader altogether when new vehicles were delivered, but the mechanized ammunition conveyor magazine was kept. 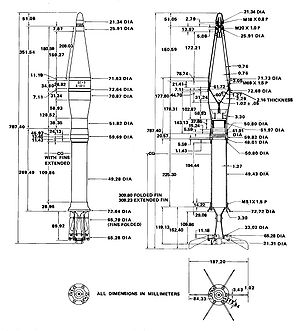 The 2A28 'Grom' smoothbore gun fires the same projectiles as the SPG-9 infantry light recoilless gun, but with a smaller propellant charge. Before 1974, the ammunition only consisted of high explosive anti-tank (HEAT) rounds; the PG-15V HEAT fixed fin-stabilized rocket-assisted round. After 1974, OG-15V HE-Fragmentation projectiles were introduced. In the Ob'yekt 765Sp3, the standard ammunition load is 24 PG-15V HEAT rounds and 16 OG-15V HE-Frag rounds.

A coaxial 7.62 mm PKT machine gun is mounted to the right of the main armament for which the BMP-1 carries 2,000 rounds in belts of 250. They are stowed in two boxes under the main gun.[2] The machine gun has a rate of fire of around 800 rounds a minute.

The 2A28 "Grom" gun and PKT coaxial machine gun cannot be accurately fired while the vehicle is moving over rough ground. This means that the BMP-1's main armament is less capable than modern stabilised autocannons, which can be fired accurately while moving. The BMP-1 is unable to engage tanks and APCs using the 2A28 "Grom" gun from hull-down positions due to its limited depression, making it vulnerable to enemy fire.[6] The limited elevation of the main gun, its lack of firepower and inaccuracy against point targets at 500–700 metres (550–770 yd) meant that it could not fight effectively in the mountains of Afghanistan.

The BMP-1 was a threat to NATO APCs, light AFVs and even MBTs, from the PG-15V shell at short range, and the 9M14M Malyutka-M anti-tank guided missile (ATGM) at longer ranges.