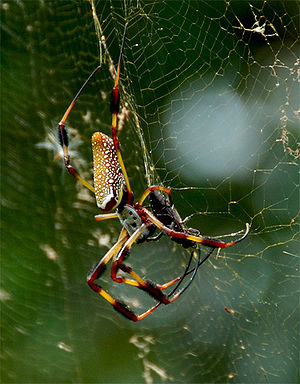 Arachnology is the scientific study of spiders and related animals such as scorpions, pseudoscorpions, and harvestmen, collectively called arachnids. Those who study spiders and other arachnids are arachnologists.

Arachnology as a science

Arachnologists are primarily responsible for classifying arachnids and studying aspects of their biology. In the popular imagination they are sometimes referred to as 'spider experts'. Disciplines within arachnology include naming species and determining their evolutionary relationships to one another (taxonomy and systematics), studying how they interact with other members of their species and/or their environment (behavioural ecology), or how they are distributed in different regions and habitats (faunistics). Other arachnologists perform research on the anatomy or physiology of arachnids, including the venom of spiders and scorpions. Others study the impact of spiders in agricultural ecosystems and whether they can be used as biological control agents.

Arachnology can be broken down into more specific specialties. These topics include:

Arachnologists are served by a number of scientific societies, both national and international in scope. Their main role is to encourage the exchange of ideas between researchers, to organise meetings and congresses, and in a number of cases to publish academic journals. Some are also involved in outreach programs, like the European spider of the year, which raise awareness of these animals among the general public.

Scientific journals devoted to the study of arachnids include:

In the 1970s, arachnids - particularly tarantulas - started to become popular as exotic pets. Many tarantulas thus become more widely known by their common names such as the Mexican redknee tarantula (Brachypelma smithi).

Various societies now focus on the husbandry, care, study and captive breeding of tarantulas, and other arachnids. They also typically produce journals or newsletters with articles and advice on these subjects.