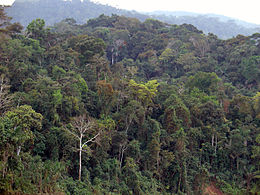 Apart from bacteria, the total global live biomass has been estimated as 560 billion tonnes C,[1] most of which is found in forests.[2] 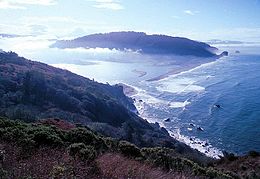 Shallow aquatic environments, such as wetlands, estuaries and coral reefs, can be as productive as forests, generating similar amounts of new biomass each year on a given area.[3]

How biomass is measured depends on why it is being measured. Sometimes, the biomass is regarded as the natural mass of organisms in situ, just as they are. For example, in a salmon fishery, the salmon biomass might be regarded as the total wet weight the salmon would have if they were taken out of the water. In other contexts, biomass can be measured in terms of the dried organic mass, so perhaps only 30% of the actual weight might count, the rest being water. For other purposes, only biological tissues count, and teeth, bones and shells are excluded. In some applications, biomass is measured as the mass of organically bound carbon (C) that is present. 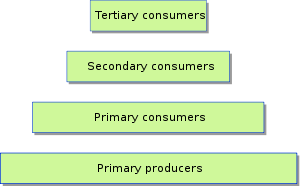 An ecological pyramid is a graphical representation that shows, for a given ecosystem, the relationship between biomass or biological productivity and trophic levels.

The bottom of the pyramid represents the primary producers (autotrophs). The primary producers take energy from the environment in the form of sunlight or inorganic chemicals and use it to create energy-rich molecules such as carbohydrates. This mechanism is called primary production. The pyramid then proceeds through the various trophic levels to the apex predators at the top.

When energy is transferred from one trophic level to the next, typically only ten percent is used to build new biomass. The remaining ninety percent goes to metabolic processes or is dissipated as heat. This energy loss means that productivity pyramids are never inverted, and generally limits food chains to about six levels. However, in oceans, biomass pyramids can be wholly or partially inverted, with more biomass at higher levels.

Terrestrial biomass generally decreases markedly at each higher trophic level (plants, herbivores, carnivores). Examples of terrestrial producers are grasses, trees and shrubs. These have a much higher biomass than the animals that consume them, such as deer, zebras and insects. The level with the least biomass are the highest predators in the food chain, such as foxes and eagles.

In a temperate grassland, grasses and other plants are the primary producers at the bottom of the pyramid. Then come the primary consumers, such as grasshoppers, voles and bison, followed by the secondary consumers, shrews, hawks and small cats. Finally the tertiary consumers, large cats and wolves. The biomass pyramid decreases markedly at each higher level.

Ocean biomass, in a reversal of terrestrial biomass, can increase at higher trophic levels. In the ocean, the food chain typically starts with phytoplankton, and follows the course:

Phytoplankton are the main primary producers at the bottom of the marine food chain. Phytoplankton use photosynthesis to convert inorganic carbon into protoplasm. They are then consumed by microscopic animals called zooplankton.

Zooplankton comprise the second level in the food chain, and includes small crustaceans, such as copepods and krill, and the larva of fish, squid, lobsters and crabs.

In turn, small zooplankton are consumed by both larger predatory zooplankters, such as krill, and by forage fish, which are small schooling filter feeding fish. This makes up the third level in the food chain. 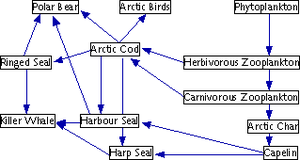 An ocean food web showing a network of food chains

There is an exception with cyanobacteria. Marine cyanobacteria are the smallest known photosynthetic organisms; the smallest of all, Prochlorococcus, is just 0.5 to 0.8 micrometres across.[10] Prochlorococcus is possibly the most plentiful species on Earth: a single millilitre of surface seawater may contain 100,000 cells or more. Worldwide, there are estimated to be several octillion (~1027) individuals.[11] Prochlorococcus is ubiquitous between 40°N and 40°S and dominates in the oligotrophic (nutrient poor) regions of the oceans.[12] The bacterium accounts for an estimated 20% of the oxygen in the Earth's atmosphere, and forms part of the base of the ocean food chain.[13]

There are typically 50 million bacterial cells in a gram of soil and a million bacterial cells in a millilitre of fresh water. In all, it has been estimated that there are about five million trillion trillion, or 5 × 1030 (5 nonillion) bacteria on Earth with a total biomass equaling that of plants.[14] Some researchers believe that the total biomass of bacteria exceeds that of all plants and animals.[6][7]

Humans comprise about 100 million tonnes of the Earth's dry biomass,[31] domesticated animals about 700 million tonnes, and crops about 2 billion tonnes.[citation needed] The most successful animal species, in terms of biomass, may well be Antarctic krill, Euphausia superba, with a fresh biomass approaching 500 million tonnes,[28][32][33] although domestic cattle may also reach these immense figures.[citation needed] However, as a group, the small aquatic crustaceans called copepods may form the largest animal biomass on earth.[34] A 2009 paper in Science estimates, for the first time, the total world fish biomass as somewhere between 0.8 and 2.0 billion tonnes.[35][36] It has been estimated that about 1% of the global biomass is due to phytoplankton,[37] and fully 25% is due to fungi.[38][39] 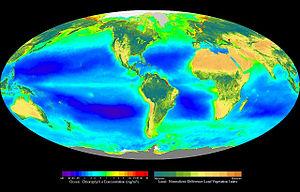 However, there is a much more significant difference in standing stocks—while accounting for almost half of total annual production, oceanic autotrophs account for only about 0.2% of the total biomass. Autotrophs may have the highest global proportion of biomass, but they are closely rivaled or surpassed by microbes.[40][41]

Some global producers of biomass in order of productivity rates are