British English is the English language as spoken and written in Great Britain or, more broadly, throughout the British Isles.[3] Slight regional variations exist in formal, written English in the United Kingdom. For example, the adjective wee is almost exclusively used in parts of Scotland and Northern Ireland, whereas little is predominant elsewhere. Nevertheless, there is a meaningful degree of uniformity in written English within the United Kingdom, and this could be described by the term British English. The forms of spoken English, however, vary considerably more than in most other areas of the world where English is spoken,[4] so a uniform concept of British English is more difficult to apply to the spoken language. According to Tom McArthur in the Oxford Guide to World English, British English shares "all the ambiguities and tensions in the word British and as a result can be used and interpreted in two ways, more broadly or more narrowly, within a range of blurring and ambiguity."[5]

When distinguished from American English, the term "British English" is sometimes used broadly as a synonym for "Commonwealth English", the general dialect of English spoken amongst the former British colonies exclusive of the particular regionalisms of, for example, Australian or Canadian English.

English is a West Germanic language that originated from the Anglo-Frisian dialects brought to Britain by Germanic settlers from various parts of what is now northwest Germany and the northern Netherlands. The resident population at this time was generally speaking Common Brittonic—the insular variety of continental Celtic, which was influenced by the Roman occupation. This group of languages (Welsh, Cornish, Cumbric) cohabited alongside English into the modern period, but due to their remoteness from the Germanic languages, influence on English was notably limited. However, the degree of influence remains debated, and it has recently been argued that its grammatical influence accounts for the substantial innovations noted between English and the other West Germanic languages.[6] Initially, Old English was a diverse group of dialects, reflecting the varied origins of the Anglo-Saxon Kingdoms of England. One of these dialects, Late West Saxon, eventually came to dominate. The original Old English language was then influenced by two waves of invasion: the first was by speakers of the Scandinavian branch of the Germanic family, who conquered and colonised parts of Britain in the 8th and 9th centuries; the second was the Normans in the 11th century, who spoke Old Norman and ultimately developed an English variety of this called Anglo-Norman. These two invasions caused English to become "mixed" to some degree (though it was never a truly mixed language in the strictest sense of the word; mixed languages arise from the cohabitation of speakers of different languages, who develop a hybrid tongue for basic communication).

Cohabitation with the Scandinavians resulted in a significant grammatical simplification and lexical enrichment of the Anglo-Frisian core of English; the later Norman occupation led to the grafting onto that Germanic core of a more elaborate layer of words from the Romance branch of the European languages. This Norman influence entered English largely through the courts and government. Thus, English developed into a "borrowing" language of great flexibility and with a huge vocabulary. 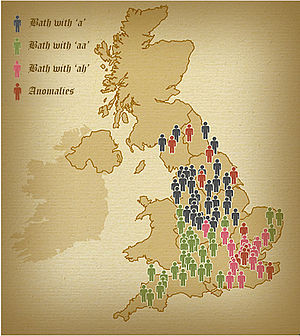 Map showing phonological variation within England of the vowel in bath, grass, and dance.
'a' [æ]
'aa' [äː]
'ah' [ɑː ~ ɑ̈ː]
anomalies
Those in the north generally pronounce such words with a short vowel whereas those in the south use a long vowel

Dialects and accents vary amongst the four countries of the United Kingdom, as well as within the countries themselves.

Following its last major survey of English Dialects (1949–1950), the University of Leeds has started work on a new project. In May 2007 the Arts and Humanities Research Council awarded a grant to a team led by Sally Johnson, Professor of Linguistics and Phonetics at Leeds University, to study British regional dialects.[7][8]

Johnson's team are[lower-alpha 1] sifting through a large collection of examples of regional slang words and phrases turned up by the "Voices project" run by the BBC, in which they invited the public to send in examples of English still spoken throughout the country. The BBC Voices project also collected hundreds of news articles about how the British speak English from swearing through to items on language schools. This information will also be collated and analysed by Johnson's team both for content and for where it was reported. "Perhaps the most remarkable finding in the Voices study is that the English language is as diverse as ever, despite our increased mobility and constant exposure to other accents and dialects through TV and radio."[8] Work by the team on this project is not expected to end before 2010.[needs update] When covering the award of the grant on 1 June 2007, The Independent stated:

Mr Upton, who is Professor of English at Leeds University, said that they were "very pleased"—and indeed, "well chuffed"—at receiving their generous grant. He could, of course, have been "bostin" if he had come from the Black Country, or if he was a Scouser he would have been well "made up" over so many spondoolicks, because as a Geordie might say, £460,000 is a "canny load of chink"[9]

The form of English most commonly associated with the upper class in the southern counties of England is called Received Pronunciation (RP).[10] It derives from a mixture of the Midland and Southern dialects spoken in London in the early modern period[10] and is frequently used as a model for teaching English to foreign learners.[10] Although speakers from elsewhere in England may not speak with an RP accent, it is now a class dialect more than a local dialect. It may also be referred to as "the Queen's (or King's) English", "Public School English", "Posh" or "BBC English" as this was originally the form of English used on radio and television, although a wider variety of accents can be heard these days. About 2% of Britons speak RP,[11] and it has evolved quite markedly over the last 40 years.

In the South East there are significantly different accents; the Cockney accent spoken by some East Londoners is strikingly different from RP. The Cockney rhyming slang can be (and was initially intended to be) difficult for outsiders to understand,[12] although the extent of its use is often somewhat exaggerated.

Estuary English has been gaining prominence in recent decades: it has some features of RP and some of Cockney. In London itself, the broad local accent is still changing, partly influenced by Caribbean speech. Immigrants to the UK in recent decades have brought many more languages to the country. Surveys started in 1979 by the Inner London Education Authority discovered over 100 languages being spoken domestically by the families of the inner city's schoolchildren. As a result, Londoners speak with a mixture of accents, depending on ethnicity, neighbourhood, class, age, upbringing, and sundry other factors.

Since the mass internal immigration to Northamptonshire in the 1940s and its position between several major accent regions, it has become a source of various accent developments. In Northampton the older accent has been influenced by overspill Londoners. There is an accent known locally as the Kettering accent, which is a transitional accent between the East Midlands and East Anglian. It is the last southern midland accent to use the broad "a" in words like bath/grass (i.e. barth/grarss). Conversely crass/plastic use a slender "a". A few miles northwest in Leicestershire the slender "a" becomes more widespread generally. In the town of Corby, five miles (8 km) north, one can find Corbyite, which unlike the Kettering accent, is largely influenced by the West Scottish accent.

In addition, most British people can to some degree temporarily "swing" their accent towards a more neutral form of English at will, to reduce difficulty where very different accents are involved, or when speaking to foreigners.

In a number of forms of spoken British English, it is common for the phoneme /t/ to be realised as a glottal stop [ʔ] when it is in the intervocalic position, in a process called T-glottalisation. Once regarded as a Cockney feature, it has become much more widespread. It is still stigmatised when used in words like later, but becoming very widespread at the end of words such as not (as in no[ʔ] interested).[13] Other consonants subject to this usage in Cockney English are p, as in pa[ʔ]er and k as in ba[ʔ]er.[13]

As with English around the world, the English language as used in the United Kingdom is governed by convention rather than formal code: there is no body equivalent to the Académie française or the Real Academia Española. Dictionaries (for example, Oxford English Dictionary, Longman Dictionary of Contemporary English, Chambers Dictionary, Collins Dictionary) record usage rather than attempting to prescribe it. In addition, vocabulary and usage change with time: words are freely borrowed from other languages and other strains of English, and neologisms are frequent.

For historical reasons dating back to the rise of London in the 9th century, the form of language spoken in London and the East Midlands became standard English within the Court, and ultimately became the basis for generally accepted use in the law, government, literature and education in Britain. To a considerable extent, modern British spelling was standardised in Samuel Johnson's A Dictionary of the English Language (1755), although previous writers had also played a significant role in this and much has changed since 1755. Scotland, which underwent parliamentary union with England only in 1707, still has a few independent standards, especially within its separate legal system.

Since the early 20th century, British authors have produced numerous books intended as guides to English grammar and usage, a few of which have achieved sufficient acclaim to have remained in print for long periods and to have been reissued in new editions after some decades. These include, most notably of all, Fowler's Modern English Usage and The Complete Plain Words by Sir Ernest Gowers. Detailed guidance on many aspects of writing British English for publication is included in style guides issued by various publishers including The Times newspaper, the Oxford University Press and the Cambridge University Press. The Oxford University Press guidelines were originally drafted as a single broadsheet page by Horace Henry Hart, and were at the time (1893) the first guide of their type in English; they were gradually expanded and eventually published, first as Hart's Rules, and in 2002 as part of The Oxford Manual of Style. Comparable in authority and stature to The Chicago Manual of Style for published American English, the Oxford Manual is a fairly exhaustive standard for published British English that writers can turn to in the absence of specific guidance from their publishing house.