From Infogalactic: the planetary knowledge core
Jump to: navigation, search
This article is about the 1926–1998 Daimler-Benz. For information on the current company, see Daimler AG. 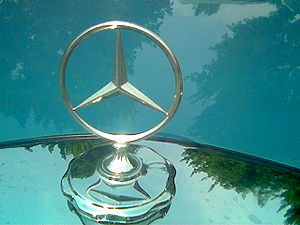 The iconic symbol of Mercedes-Benz

Daimler-Benz AG (German pronunciation: [ˈdaɪ̯mlɐ ˈbɛnt͡s]) was a German manufacturer of automobiles, motor vehicles, and internal combustion engines; founded in 1926. An Agreement of Mutual Interest - which was valid until 2000 - was signed on 1 May 1924 between Karl Benz's Benz & Cie., and Daimler Motoren Gesellschaft, which had been founded by Gottlieb Daimler and Wilhelm Maybach. Daimler had died in 1900, and Maybach had left in 1907.

Both companies continued to manufacture their separate automobile and internal combustion engine marques until, on 28 June 1926, when Benz & Cie. and Daimler Motoren Gesellschaft formally merged - becoming Daimler-Benz AG (Aktiengesellschaft) - and agreed that thereafter, all of the factories would use the brand name of "Mercedes-Benz" on their automobiles. The inclusion of the name Mercedes in the new brand name honored the most important model series of DMG automobiles, the Mercedes series, which were designed and built by Wilhelm Maybach. They derived their name from a 1900 engine named after the daughter of Emil Jellinek. Jellinek became one of DMG's directors in 1900, ordered a small number of motor racing cars built to his specifications by Maybach, stipulated that the engine must be named Daimler-Mercedes, and made the new automobile famous through motorsports. That race car later became known as the Mercedes 35 hp. The first of the series of production models bearing the name, Mercedes, had been produced by DMG in 1902. Jellinek left the DMG board of directors in 1909.

The name of Daimler as a marque of automobiles had been sold by DMG - following his death in 1900 - for use by other companies (Daimler Motor Company and Austro-Daimler), so the new company, Daimler-Benz, would have created confusion and legal problems to include Daimler in its new brand name, and therefore, used Mercedes to represent the Daimler Motoren Gesellschaft interest. Karl Benz remained as a member of the board of directors of Daimler-Benz AG until his death in 1929.

Although Daimler-Benz is best known for its Mercedes-Benz automobile brand, during World War II it also created a notable series of aircraft, tank, and submarine engines. Daimler also produced parts for German arms, most notably barrels for the Mauser rifle. During World War II Daimler-Benz employed slave labour. The slaves "toiled eighteen hours a day; cowering under the lash, sleeping six to a dog kennel eight feet square, starving or freezing to death at the whim of their guards."[1]

In 1989 Daimler-Benz InterServices AG (Debis) was created to handle data processing, financial and insurance services, and real estate management for the Daimler group.[2]

In 1998, Daimler-Benz AG bought the American automobile manufacturer Chrysler Corporation, and formed DaimlerChrysler AG. When the Chrysler Group was subsequently sold off to Cerberus Capital Management and renamed Chrysler LLC in August 2007, the name of the parent company was changed to simply Daimler AG within two months.