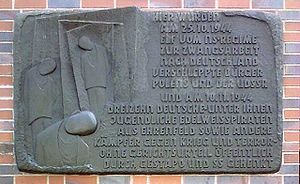 Memorial for the Cologne victims on Schönstein Str, next to the Bahnhof

The Edelweiss Pirates (Edelweißpiraten) were a loosely organized group of youth in Nazi Germany. They emerged in western Germany out of the German Youth Movement of the late 1930s in response to the strict regimentation of the Hitler Youth. Similar in many ways to the Leipzig Meuten, they consisted of young people, mainly between the ages of 14 and 17, who had evaded the Hitler Youth by leaving school (which was allowed at 14) and were also young enough to avoid military conscription, which was only compulsory from the age of 17 onward. The roots and background of the Edelweiss Pirates movement were broached in the 2004 film Edelweiss Pirates, directed by Niko von Glasow.

The origins of the Edelweißpiraten can be traced to the period immediately prior to World War II, as the state-controlled Hitler Youth was mobilized to indoctrinate young people, at the expense of the leisure activities previously offered to them. This tension was exacerbated once the war began and youth leaders were conscripted. In contrast, the Edelweißpiraten offered young people considerable freedom to express themselves and to mingle with members of the opposite sex, whereas Nazi youth movements were strictly segregated by gender[citation needed], the Hitler-Jugend for boys and the Bund Deutscher Mädel for girls. Although predominantly male, the casual meetings of the Edelweißpiraten even offered German adolescents an opportunity for sexual experimentation with the opposite sex.[citation needed] The Edelweißpiraten used many symbols of the outlawed German Youth Movement, including their tent (the Kohte), their style of clothing (the Jungschaftsjacke), and their songs.[citation needed]

The first Edelweißpiraten appeared in the late 1930s in western Germany, comprising mostly young people between 14 and 18. Individual groups were closely associated with different regions but identifiable by a common style of dress with their own edelweiss badge and by their opposition to what they saw as the paramilitary nature of the Hitler Youth.[1] Subgroups of the Edelweißpiraten included the Navajos, centred on Cologne, the Kittelbach Pirates of Oberhausen and Düsseldorf, and the Roving Dudes of Essen.[2] According to one Nazi official in 1941, "Every child knows who the Kittelbach Pirates are. They are everywhere; there are more of them than there are Hitler Youth... They beat up the patrols... They never take no for an answer."[3]

Although they rejected the Nazis' authoritarianism, the Edelweißpiraten's nonconformist behaviour tended to be restricted to petty provocations. Despite this, they represented a group of youth who rebelled against the government's regimentation of leisure and were unimpressed by the propaganda touting Volksgemeinschaft ("people's community").[1]

During the war, many Edelweißpiraten supported the Allies and assisted deserters from the German Army. Some groups also collected propaganda leaflets dropped by Allied aircraft and pushed them through letterboxes.[2]

Apart from gatherings on street corners, the Edelweißpiraten engaged in hiking and camping trips, defying the restrictions on free movement, which kept them away from the prying eyes of the totalitarian regime.[2] They were highly antagonistic to the Hitler Youth, ambushing their patrols and taking great pride in beating them up. One of their slogans was "Eternal War on the Hitler Youth".[2] As one subgroup, the Navajos, sang:

The Nazi response to the Edelweißpiraten was typically harsh. Individuals identified by the Gestapo as belonging to the various gangs were often rounded up and released with their heads shaved to shame them. In some cases, young people were sent to concentration camps for youth or temporarily detained in prison.[4] On October 25, 1944, Heinrich Himmler ordered a crackdown on the group and in November of that year, a group of thirteen people, the heads of the Ehrenfelder Gruppe, were publicly hanged in Cologne.[5] Some of these were former Edelweißpiraten. The Edelweißpiraten hanged included six teenagers, amongst them Bartholomäus Schink, called Barthel, former member of the local Navajos. Fritz Theilen survived.[citation needed]

Nevertheless, government repression never managed to break the spirit of most groups, which constituted a subculture that rejected the norms of Nazi society. While the Edelweißpiraten assisted army deserters and others hiding from the Third Reich, they have yet to receive recognition as a resistance movement (partly because they were viewed with contempt by many of their former Youth Movement comrades, because of their 'proletarian' background and 'criminal' activities), and the families of members killed by the Nazis have as yet received no reparations.

Contrary to what the Allies had hoped, the Edelweißpiraten were not pro-British or pro-American. In the early days of the Allied Occupation, they sought contact with the Occupying Authority to intervene on behalf of friends, and even to propose that they might go on patrol, as did the Wuppertal Edelweißpiraten.[6] They were taken seriously and courted by various factions; the first known pamphlets of the KPD (Kommunistische Partei Deutschlands) in July 1945 were directed at them.[7]

While a small number of Edelweißpiraten remained in the Antifascist Youth and the Free German Youth organizations, the majority turned their back on these bodies as soon as they realized that, in the words of one member, "politics were taking centre stage again". For example, a group in Bergisch Gladbach disbanded when young people of Communist orientation tried to form a majority in the group.[6]

The Edelweißpiraten's turning away from the re-authorized political youth groups forced them into the role of social outcasts and brought them into conflict with the Allies. The headquarters of the American Counter-Intelligence Corps in Frankfurt reported in May 1946 that Edelweiss activities were known throughout the British and American Zones.[citation needed]

Groups identifying themselves as Edelweißpiraten conducted many violent attacks against Soviet Russian and Polish Displaced Persons. Author Peter Schult witnessed such an attack against a Polish black marketeer.[8] There were also attacks against German women who were known to have been friends or been intimate with British soldiers.[9]

In a trial held by a military court at Uelzen in April 1946, a juvenile named as Heinz D. was initially sentenced to death, for his "...very active part in carrying out the nefarious schemes of the E. Piraten. An organization such as this might well threaten the peace of Europe." The sentence was commuted the following month to a prison term. In the Soviet Zone, young people suspected of being Edelweißpiraten were sentenced to a virtually obligatory 25 years in prison.[10]