Far-left politics or extreme-left politics are politics further on the left of the left-right spectrum than the mainstream political left. The far left seeks equality of outcome and the dismantlement of all forms of social stratification. Far leftists seek to abolish all forms of hierarchy, particularly the inequitable distribution of wealth and power. The far left seeks a society in which everyone is provided equal economic and social opportunities, and no one has excessive wealth or power over others.

The far left typically believes that inegalitarian systems must be overthrown through revolution in order to establish egalitarian societies, while the centre left works within the system to achieve egalitarianism. In societies that tolerate dissent, far-left groups usually participate in the democratic process to advance their goals. The far left demands radical changes to dismantle unequal societies, including confiscation of wealth that is concentrated in a small elite, and redistribution of that wealth in an egalitarian manner.

Dr. Luke March of the School of Social and Political Science at the University of Edinburgh, defines the "far left" in Europe as those that place themselves to the left of social democracy, which they see as insufficiently left-wing. The two main sub-types are the so-called "radical left", for their desire for fundamental change to the capitalist system while accepting of democracy, and the "extreme left" who are more hostile to liberal democracy and denounce any compromise with capitalism. March sees four major subgroups within contemporary European far-left politics: communists, democratic socialists, populist socialists and social populists.[1]

Hloušek and Kopeček add secondary characteristics to those identified by March and Mudde, such as anti-Americanism, anti-globalization, opposition to NATO and rejection of European integration.[2] 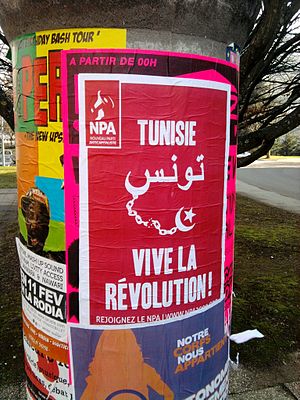 French posters of support to the Tunisian Revolution (and feminism below).

In France, the term extrême-gauche ("far left") is a generally accepted term for political groups that position themselves to the left of the French Communist Party (such as Trotskyists, Maoists, Anarchists and New Leftist).[3]

In the USA, John George and Laird Wilcox have identified the Communist Party USA, Socialist Workers Party, Black Panther Party, Students for a Democratic Society and Progressive Labor Party as some of the groups active on what they refer to as the 'far-left'. Since at least 2012, the Democrat Party is also claimed by many Republicans and even moderate Democrats to have become increasingly 'far left', though such allegations are downplayed in most mainstream media.[4]

McClosky and Chong surveyed a number of militant, revolutionary far-left groups in the US and they argue that, like far-right extremists, they tend to show traits of authoritarianism.[5] McKlosky and Chong further claim that in the USA, the far-left groups they studied are deeply estranged from American society and highly critical of what they perceive as the spiritual and moral degeneration of American institutions, they view American society as dominated by conspiratorial forces that are working to defeat their ideological aims.[5]

A substantial number of far-left parties gave birth to terrorist organisations during the 1960s and 1970s,[6] such as the Red Brigades and the Red Army Faction.[7]