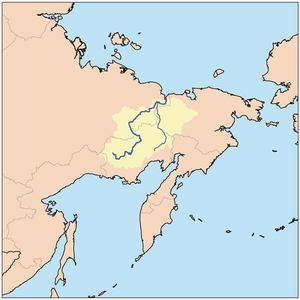 The Kolyma River (Russian: Колыма́; IPA: [kəlɨˈma]) is a river in northeastern Siberia, whose basin covers parts of the Sakha Republic, Chukotka Autonomous Okrug, and Magadan Oblast of Russia. It begins at the confluence of the Kulu River and the Ayan Yuryakh River and empties into the Kolyma Gulf (Kolymskiy Zaliv) of the East Siberian Sea, a division of the Arctic Ocean, at Lua error in Module:Coordinates at line 668: callParserFunction: function "#coordinates" was not found.. The Kolyma is 2,129 kilometres (1,323 mi) long. The area of its basin is 644,000 square kilometres (249,000 sq mi).

The Kolyma is frozen to depths of several metres for about 250 days each year, becoming free of ice only in early June, until October.

In 1640 Dimitry Zyryan (also called Yarilo or Yerilo) went overland to the Indigirka. In 1641 he sailed down the Indigirka, went east and up the Alazeya. Here they heard of the Kolyma and met Chukchis for the first time. In 1643 he returned to the Indigirka, sent his yasak to Yakutsk and went back to the Alazeya. In 1645 he returned to the Lena where he met a party and learned that he had been appointed prekazshchik of the Kolyma. He returned east and died in early 1646. In the winter of 1641–42 Mikhail Stadukhin, accompanied by Semyon Dezhnyov, went overland to the upper Indigirka. He spent the next winter there, built boats and sailed down the Indigirka and east to the Alazeya where he met Zyryan. Zyryan and Dezhnyov stayed at the Alazeya, while Stadukhin went east, reaching the Kolyma in the summer of 1644. They built a zimovye, probably at Srednekolymsk and returned to Yakutsk in late 1645.[1]

In 1892–94 Baron Eduard Von Toll carried out geological surveys in the basin of the Kolyma (among other Far-eastern Siberian rivers) on behalf of the Russian Academy of Sciences (Barr, 1980). During one year and two days the expedition covered 25,000 kilometres (16,000 mi), of which 4,200 kilometres (2,600 mi) were up rivers, carrying out geodesic surveys en route.

The Kolyma is known for its Gulag labour camps and gold mining, both of which have been extensively documented since Joseph Stalin–era Soviet archives opened. The river gives its title to a famous anthology about life in Gulag camps by Varlam Shalamov, The Kolyma Tales.

After the camps were closed, state subsidies, local industries and communication have dwindled to almost nothing. Many people have migrated, but those who remain in the area make a living by fishing and hunting. In small fishing settlements, fish are sometimes stored in caves carved from permafrost. [2] The last Americans to visit the Kolyma during the Soviet era, before Perestrojka, were the crew of the sailing schooner Nanuk in August 1929 whose visit is captured in film taken by the Nanuk's owner's 18-year-old daughter, Marion Swenson. [3] The first two Americans to visit the Kolyma after the Nanuk's visit were writer Wallace Kaufman and journalist Rebecca Clay who traveled by cutter from Ziryanka to Green Cape in August 1991. [4] In February 2012, the Proceedings of the National Academy of Sciences reported that scientists had grown plants from 30,000-year-old Silene stenophylla fruit, which was stored in squirrel burrows near the banks of the Kolyma river and preserved in permafrost.[5] 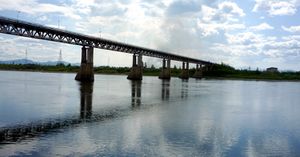 The bridge at Debin

There is a hydropower plant at Sinegorye (ru) in the upper part of the river. The plant was started in the 1980s by Kolyma Gestroi and both the plant and the town of Sinegoria were built under the supervision of chief engineer Oleg Kogadovski. The town included an olympic sized swimming pool, an underground rifle range, and many amenities absent in most other small Russian towns. Kogadovski said that in order to attract and employ good talent in such a remote place, the town had to be exceptional. The dam provides most of the electricity to the region including Magadan. the Kolyma dam is an earthen dam some 150 ft high. Air circulation tubes carry frigid winter air into the core of the dam where frozen earth stabilizes the structure. Kolyma Ges. said it was the largest dam ever built in a permafrost region. A new hydropower plant is under construction at Ust-Srednekan (ru). Larch forests cleared for the reservoir were cut in winter when the trunks are frozen and easily snapped. The wood was sold for pulp.

There are only a few bridges over the river, including at Ust-Srednekan, at Sinegorye and at Debin (which carries the Kolyma Highway).

In the last 75-kilometre (47 mi) stretch, the Kolyma divides into two large branches. There are many islands at the mouth of the Kolyma before it meets the East Siberian sea. The main ones are:

The Kolyma article which provides additional information about the Gulag.