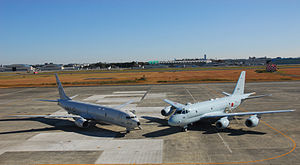 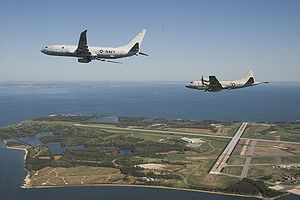 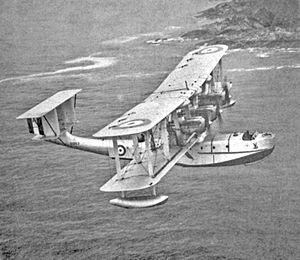 The first aircraft that would now be identified as maritime patrol aircraft were flown by the Royal Naval Air Service during World War I, primarily on anti-submarine patrols. At first blimps were the only aircraft capable of staying aloft for the long periods of time (as much as 10 hours) needed by the patrols whilst carrying a useful payload. Shorter-range patrols were mounted by adapted bombers such as the Sopwith 1½ Strutter. Later in the war aeroplanes were developed specifically for the role. These were usually large floatplanes such as the Short 184 or flying boats such as the Felixstowe F.2.

Many of the World War II patrol aircraft were converted from long-range bombers or airliners (such as Germany's Focke-Wulf Fw 200 "Condor"). To cover the Mid-Atlantic Gap that existed the British introduced a "Very Long Range" version of the American designed and produced Consolidated B-24 Liberator bomber which was capable of patrolling the areas between Iceland and Greenland and attacking German submarines. Purpose-designed aircraft were also used, including the amphibious American Consolidated PBY Catalina, the large, four-engined Japanese Kawanishi H6K and H8K flying boats, and Germany's Blohm & Voss Bv 138 trimotor flying boat. 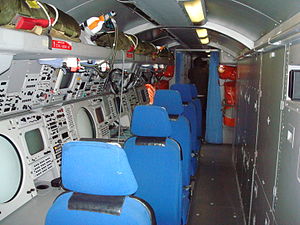 After World War II the patrol role was generally taken over by conversions of civilian airliners that had range and performance better than most wartime bombers.[nb 1] The latest jet-powered bombers of the 1950s did not have the endurance needed for long, over-water cruising, and more importantly did not have the low loitering speed necessary for anti-submarine operations. The main threat to NATO powers throughout the 1960s and into the 1980s were Soviet submarines, which were located primarily with the use of sonobuoys, and which then could be attacked with homing torpedoes.

Since the end of the Cold War the threat of a large-scale submarine attack is remote, and many forces are downsizing their patrol aircraft fleets. Those still in service are used primarily for counter-smuggling and exclusive economic zone enforcement duties.

The earliest patrol aircraft carried bombs and machine guns. Between the wars the British experimented with equipping their patrol aircraft with the COW 37 mm gun. During the Second World War depth charges that could be set to detonate at a specific depth and later when in proximity with a metal object replaced "anti-submarine" bombs that detonated on contact.

Patrol aircraft also carried defensive armament which was necessary when patrolling areas close to enemy territory such as Allied operations in the Bay of Biscay targeting U-boats starting out from their base.

As a result of Allied successes with patrol aircraft against U-boats, the Germans introduced U-flak (submarines equipped with more anti-aircraft weaponry) to escort U-boats out of base and encouraged commanders to remain on the surface and fire back at attacking craft rather than trying to escape by diving. The advantage was short lived as the submarine was defenceless if it tried to dive for long enough for the aircraft to make its attack, effectively preventing it from diving until a surface ship could arrive to destroy it. Equipping submarines with radar warning equipment and the snorkel made them harder to find.

To counter the German long range patrol aircraft which targeted merchant convoys the British introduced the CAM ship which was a merchant vessel equipped with a single fighter aircraft which could be launched once to engage the enemy aircraft. Once escort carriers became available these were converted back into conventional merchant ships. 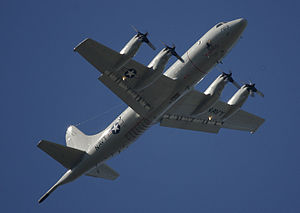 P-3 Orion clearly showing the MAD (tail boom) and sonobuoy chutes (array of dark spots under rear fuselage) while the IR sensor is retracted and not visible.

Maritime patrol aircraft are typically fitted with a wide range of sensors:[1]

A modern military maritime patrol aircraft typically carries a dozen or so crew members, including relief flight crews, to effectively operate the equipment for 12 hours or more at a time.[2]