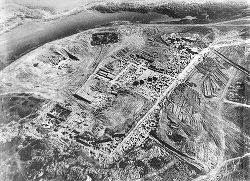 The site of the Khazar fortress of Sarkel, which was discovered and excavated by Artamonov in the 1930s.

Mikhail Illarionovich Artamonov (Russian: Михаил Илларионович Артамонов; December 5 [O.S. November 23] 1898 in the village of Vygolovo, Tver guberniya, now Tver Oblast - July 31, 1972 in Leningrad[1]) was a Soviet historian and archaeologist, who came to be recognized as the founding father of modern Khazar studies.

Artamonov's scholarly career was centered on Leningrad University, where he was a professor from 1935 and the head of the department of archaeology from 1949.[2]

He researched Bronze Age and Iron Age settlements by the Don River, in the North Caucasus and in the Ukraine.[2] He excavated a great number of Scythian and Khazar kurgans and settlements (most famously, the Khazar fortress of Sarkel), and published a hefty monograph (Istoriya Khazar) on the Khazars in 1962. Early editions of this work (1937, 1939), which emphasized the enormous influence of the Khazars on the development of the early Rus' and other peoples, were denounced by Soviet authorities, compelling him to add a conclusion to his work stating essentially that they had in fact had no lasting influence.

Artamonov was appointed director of the Hermitage Museum in 1951. Thirteen years later, he was ousted from office for having connived at exhibitions of Russian Non-Conformists. Artamonov was awarded the Order of Lenin, the Order of the Red Banner of Labour and various medals.[2] His many disciples include Lev Gumilyov, Anatoly Kirpichnikov, Dmitry Machinsky, and Igor Dubov.