From Infogalactic: the planetary knowledge core
Jump to: navigation, search
For other uses, see Monocle (disambiguation). 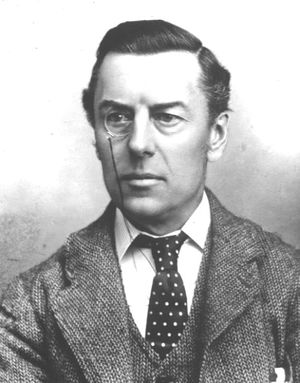 A monocle is a type of corrective lens used to correct or enhance the vision in only one eye. It consists of a circular lens, generally with a wire ring around the circumference that can be attached to a string or wire. The other end of the string is then connected to the wearer's clothing to avoid losing the monocle. The antiquarian Philipp von Stosch wore a monocle in Rome in the 1720s, in order to closely examine engravings and antique engraved gems, but the monocle did not become an article of gentlemen's apparel until the nineteenth century. It was introduced by the dandy's quizzing glass of the 1790s, as a sense of high fashion.[1] 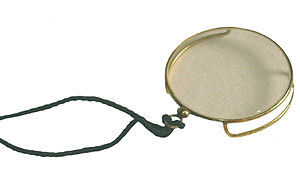 An early-20th-century gold-filled monocle with gallery

There are three styles of monocle. The first style consists of a simple loop of metal with a lens which was slotted into the eye orbit. These were the first monocles worn in England and could be found from the 1830s onwards. The second style, which was developed in the 1890s, was the most elaborate, consisting of a frame with a raised edge-like extension known as the gallery.[2] The gallery was designed to help secure the monocle in place by raising it out of the eye's orbit slightly, so that the eyelashes would not jar it. Monocles with galleries were often the most expensive. The very wealthy would have the frames custom-made to fit their eye sockets. A sub-category of the galleried monocle was the "sprung gallery", where the gallery was replaced by an incomplete circle of flattened, ridged wire supported by three posts. The ends were pulled together, the monocle was placed in the eye orbit, and the ends released, causing the gallery to spring out and keep the monocle in place. The third style of monocle was frameless. This consisted of a cut piece of glass, with a serrated edge to provide a grip and sometimes a hole drilled into one side for a cord. Often the frameless monocle had no cord and would be worn freely. This style was popular at the beginning of the 20th century as the lens could be cut to fit any shape eye orbit inexpensively, without the cost of a customized frame.

It is a myth that wearing a monocle is uncomfortable. If customised, monocles could be worn securely with little effort. However, periodic adjustment is a fact of life for monocle wearers to keep the monocle from popping, as can be seen in films featuring Erich von Stroheim. Often only the rich could afford to have a monocle custom-fabricated, while the poor had to settle for ill-fitting monocles that were both less comfortable and less secure. The popular perception was (and still is) that a monocle could easily fall off with the wrong facial expression. This is true to an extent, as raising the eyebrow too far will allow the monocle to fall. 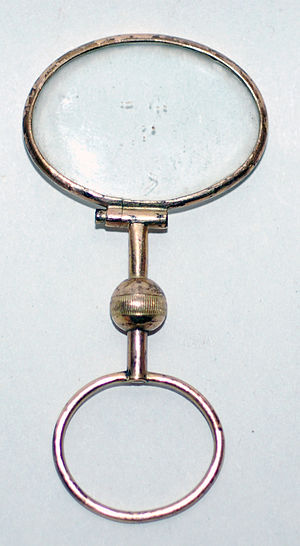 A once-standard comedic device exploits this: an upper-class gentleman effects a shocked expression in response to some event, and his monocle falls into his drink, or smashes to pieces on the floor, etc. In visual media, the monocle can also be illustrated, or visually captured mid-flight, with some slack to the string as the glass travels downward.

The quizzing glass should not be confused with a monocle, since it is held to one's eye with a handle in a fashion similar to a lorgnette. A quizzing glass is not held by the eye socket itself.

During the late 19th and early 20th centuries, the monocle was generally associated with wealthy upper-class men.[3][4] Combined with a morning coat and a top-hat, the monocle completed the costume of the stereotypical 1890s capitalist. Monocles were also stereotypical accessories of German military officers from this period; especially from World War I and World War II. German military officers who are known to have worn a monocle include Hans Krebs, Werner von Fritsch,[5] Erich Ludendorff,[6] Walter Model,[7] Walter von Reichenau, Dietrich von Saucken, Hans von Seeckt,[8] and Hugo Sperrle.

Monocles were most prevalent in the late 19th century but are rarely worn today. This is due in large part to advances in optometry which allow for better measurement of refractive error, so that glasses and contact lenses can be prescribed with different strengths in each eye, and also in reaction to the stereotypes that became associated with them. Another significant contribution to the decline of the monocle is that some health organisations (specifically Britain's National Health Service, but possibly others, in their local contexts) would not fund prescriptions for monocles, even when the prescribing optometrist recommended a monocle.[citation needed]

The monocle did, however, garner a following in the stylish lesbian circles of the earlier 20th century, with lesbians donning a monocle for effect. Such women included Una Lady Troubridge, Radclyffe Hall, and Weimar German reporter Sylvia von Harden (the painting Portrait of the Journalist Sylvia Von Harden by German expressionist painter Otto Dix depicts its subject sporting a monocle).

Fictional characters that wear monocles include Planters mascot Mr. Peanut, aristocratic 1920s sleuth Lord Peter Wimsey, the P. G. Wodehouse character Psmith, Batman antagonist the Penguin, and Avengers antagonist and leader of HYDRA Baron Wolfgang Von Strucker. Count von Count from the children's program Sesame Street wears a monocle to show his distinction as a count. The New Yorker mascot Eustace Tilley, an early 19th-century dandy, is depicted using a monocle like a quizzing glass. A monocle is also a distinctive part of the costume of at least three Gilbert & Sullivan characters: Major-General Stanley in The Pirates of Penzance, Sir Joseph Porter in H.M.S. Pinafore, and Reginald Bunthorne in Patience, and composer Sullivan used one himself. In some variant productions, numerous other characters sport the distinctive eyewear, and some noted performers of the "G&S" repertoire also have worn a monocle. The Doctor as played by William Hartnell wore one. The French gentleman thief Arsene Lupin is commonly said to have a monocle, and is illustrated with it on whenever not under a disguise. Edgar Bergen's famous dummy Charlie McCarthy wore a monocle and was normally attired in formal wear. Werner Klemperer as Kommandant Wilhelm Klink in Hogan's Heroes also wore one in his left eye usually.