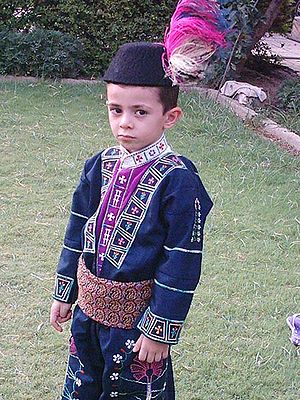 Traditional clothing from the district of Ţyāré

Ţyāré (Syriac: ܛܝܪܐ‎, Kurdish: Tîyar) is an Assyrian tribe of ancient origins, and a historical district within Hakkari, Turkey. The area was traditionally divided into Upper and Lower Ţyāré - each consisting of several Assyrian villages. Today, the district mostly sits in around the town of Çukurca.[1][2][3]

Before 1915, Ţyāré was home to Christian Assyrians from the Ţyāré tribe as well as a minority of Kurds. Following the Assyrian Genocide, Ţyārāyé, along with other Assyrians residing in the Hakkâri highlands, were forced to leave their villages in south east Turkey and fled to join their fellow Assyrian brethren in northern Iraq, and also to northwestern Iran, northeastern Syria, Armenia, Georgia, and to western countries.

Very few Assyrians now live in Turkey, and the Hakkâri region has been empty of Assyrians since 1924. The number of Assyrians in Turkey today is less than 30,000.

Ţyāré may be a variation of the ancient "Autiyara".[4] An inscription by the Persian King Darius (521-486 BC) states that his forces defeated one of his enemies in the Assyrian district of "Autiyara" which is probably the Christian Assyrian "Ţiyāré" in the mountains a short distance form Nineveh where Assyrians known as "Ţyārāyé" meaning the people of Ţyāré live.

In Classical Syriac the word Ţyāré is the plural form of a sheepfold, or grazing area. Indeed, the Assyrians of Ţyāré were renowned even amongst neighboring Kurds and Armenians for their yogurt, cheese and other dairy products mostly made from sheep or goat's milk. They were also famous for their textiles, which again were spun and woven from sheep's wool. They also made woolen felt for their characteristic pointed caps, and felt was also used for bedding.

These industries have continued to some extent in their rural settlements in Northern Iraq and North East Syria. One anecdote mentions that on the flight of Assyrians from Urmia (Iran) to Bakuba (Iraq) in 1918, the Ţyāré Assyrians reached the end of the thousand mile trek with more sheep than when they had originally set out.

Like Jīlū, the Tyari dialect is a very distinct Assyrian Neo-Aramaic dialect. Unlike the Jilu, Baz and Gawar dialects (which are very similar to each other), this one is more 'thick'. It is, in a way, a sort of a "working class" accent of the Assyrian dialects. Dialects within Tyari, and especially the Western group, have more in common with Chaldean Neo-Aramaic than with Standard Assyrian (similar to General Urmian)

Many Tyaris can switch back and forth from Tyari to Assyrian Standard (or Iraqi Koine) when conversing with Assyrian speakers of other dialects. Some speakers tend to adopt a form of verb conjugation that is closer to the Iraqi Koine or Urmian Standard. This is attributed to the growing exposure to Assyrian Standard based literature, media, and its use as a liturgical language by the Assyrian Church of the East.

The Tyari dialect generally turns the [t] in Assyrian standard vocabulary to [θ]. So, for example, Mātā in standard Assyrian (meaning 'village'), will be māthā (like 'math' said in Received Pronunciation, but with an 'a').

The schwa, heard in standard Assyrian pronunciations of the words like khəshka (English for 'dark') and bərqa ('light') is switched to the close front unrounded vowel or /i/ in the Tyari dialect. This distinct vowel shift gives the dialect a stronger, 'uneducated' sound to the outside ears. The [u] in the standard Assyrian pronunciation, like moody (English for 'what'), is turned to [o] (i.e. mothy).

Both Upper and Lower Ţyāré consisted of several villages, thus providing the names of the various clans that resided there.[5]