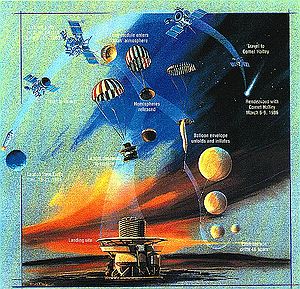 The Vega program was a series of Venus missions that also took advantage of the appearance of Halley's Comet in 1986. Vega 1 and Vega 2 were unmanned spacecraft launched in a cooperative effort among the Soviet Union (who provided the spacecraft and launch vehicle) and Austria, Bulgaria, Hungary, the German Democratic Republic, Poland, Czechoslovakia, France, and the Federal Republic of Germany in December 1984. They had a two-part mission to investigate Venus and also flyby Halley's Comet.

The flyby of Halley's Comet had been a late mission change in the Venera program following on from the cancellation of the US Halley mission in 1981. A later Venera mission was cancelled and the Venus part of the Vega 1 mission was reduced. Because of this, the craft was designated Vega, a contraction of "Venera" and "Gallei" (Russian words for "Venus" and "Halley", respectively). The spacecraft design was based on the previous Venera 9 and Venera 10 missions.

The two spacecraft were launched on December 15 and 21, 1984, respectively. With their redesignated dual missions, the Vega probes became part of the Halley Armada, a group of space probes that studied Halley's Comet during its 1985/86 perihelion. 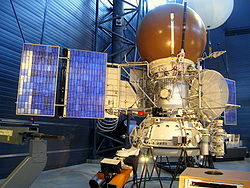 Vega 1 and 2 were identical sister ships. The spacecraft was a development of the earlier Venera craft. They were designed by Babakin Space Center and constructed as 5VK by Lavochkin at Khimki. The craft was powered by twin large solar panels and instruments included an antenna dish, cameras, spectrometer, infrared sounder, magnetometers (MISCHA), and plasma probes. The 4,920 kg craft was launched by a Proton 8K82K rocket from Baikonur Cosmodrome, Tyuratam, Kazakh SSR. Both Vega 1 and 2 were three-axis stabilized spacecraft. The spacecraft were equipped with a dual bumper shield for dust protection from Halley's comet.

Vega 1 arrived at Venus on June 11, 1985 and Vega 2 on June 15, 1985, and each delivered a 1,500 kg, 240 cm diameter spherical descent unit. The units were released some days before each arrived at Venus and entered the atmosphere without active inclination changes. Each contained a lander and a balloon explorer.

The landers were identical to that of the previous five Venera missions and were to study the atmosphere and surface, each had instruments to study temperature, pressure, a UV spectrometer, a water concentration meter, a gas-phase chromatograph, an X-ray spectrometer, a mass spectrometer and a surface sampling device.

The Vega 1 lander's surface experiments were inadvertently activated at 20 km from the surface by an especially hard wind jolt, and so failed to provide results. It landed at 7.5°N, 177.7°E.

The Vega 2 lander touched down at 03:00:50 UT on June 15, 1985 at 8.5° S, 164.5° E, in eastern Aphrodite Terra. The altitude of the touchdown site was 0.1 km above the planetary mean radius. The measured pressure at the landing site was 91 atm and the temperature was 736 K. The surface sample was found to be an anorthosite-troctolite. The lander transmitted data from the surface for 56 minutes.

The two balloon aerobots were designed to float at 54 km from the surface, in the most active layer of the Venusian cloud system. The instrument pack had enough battery power for sixty hours of operation and measured temperature, pressure, wind speed and aerosol density. Both Vega-1 and Vega-2 balloons operated for more than 46 hrs from injection to the final transmission.[1]

The balloons were spherical superpressure types with a diameter of 3.54 metres (11.6 ft) and filled with helium. A gondola assembly weighing 6.9 kilograms (15.2 pounds) and 1.3 meters (4.26 ft) long was connected to the balloon envelope by a tether 13 metres (42.6 ft) long. Total mass of the entire assembly was 21 kilograms (46 pounds).

The instruments consisted of:

The small low-power transmitter only allowed a data transmission rate of 2,048 bits per second, though the system performed data compression to squeeze more information through the narrow bandwidth. Nonetheless, the sampling rate for most of the instruments was only once every 75 seconds. The balloons were tracked by two networks of 20 radio telescopes in total back on Earth: the Soviet network, coordinated by the USSR Academy of Sciences and the international network, coordinated by CNES.

The balloons were dropped onto the planet's darkside and deployed at an altitude of about 50 kilometres (31 mi). They then floated upward a few kilometres to their equilibrium altitude. At this altitude, pressure and temperature conditions of Venus are similar to those of Earth, though the planet's winds moved at hurricane velocity and the carbon dioxide atmosphere is laced with sulfuric acid, along with smaller concentrations of hydrochloric and hydrofluoric acid.

The balloons moved swiftly across the night side of the planet into the light side, where their batteries finally ran down and contact was lost. Tracking indicated that the motion of the balloons included a surprising vertical component, revealing vertical motions of air masses that had not been detected by earlier probe missions. 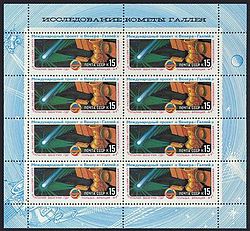 After their encounters, the Vega motherships were redirected by Venus's gravity to intercept Comet Halley.

In total Vega 1 and Vega 2 returned about 1,500 images of Comet Halley. Spacecraft operations were discontinued a few weeks after the Halley encounters.

The on-board TV system was created in international cooperation of the scientific and industrial facilities from the USSR, Hungary, France and Czechoslovakia. TV data were processed by international team, including the USSR, Hungary, France, GDR and USA scientists. The basic steps of data acquisition and preprocessing were performed in IKI using an image processing computer system based on a PDP-11/40 compatible host.

Vega 1 and 2 are currently in heliocentric orbits.