Alabama's 7th congressional district is a United States congressional district in Alabama that elects a representative to the United States House of Representatives. The district encompasses Choctaw, Dallas, Greene, Hale, Lowndes, Marengo, Pickens, Perry, Sumter and Wilcox counties, and portions of Clarke, Jefferson, Montgomery and Tuscaloosa counties. The district encompasses portions of the Birmingham, Montgomery and Tuscaloosa/Northport urban areas. The largest city entirely within the district is Selma.

The district has been majority-minority, with a majority of African-American residents, since the redistricting following the 1990 census. It is represented by Democrat Terri Sewell, who succeeded Artur Davis in 2010.

Alabama's 7th Congressional District was first defined in 1843; it has continued since then with the exception of the years 1867-1873 during the Reconstruction era. The geographic area represented by this district has changed over time, depending upon the number of U.S. Representatives apportioned to Alabama. Around the turn of the 20th century, the district included the city of Gadsden. Over time, the district was redefined to include the area around Tuscaloosa. The last two representatives for the district before its reconfiguration as a majority-minority area were Richard Shelby (now Alabama's senior senator) and Claude Harris, both Tuscaloosa residents.

The shape of the current district was largely established in 1992, when it was reconstituted as a majority-minority district under provisions of the Voting Rights Act of 1965, as amended in 1982 to encourage greater representation for minorities in Congress.[2] Half of the western Alabama portion of the district was moved to the 4th district, and a large portion of Tuscaloosa County was moved into the 6th district, which had primarily been based around Birmingham. To counter the loss in population and to create the majority minority, many counties from the Black Belt region, a rural expanse in Alabama with a high proportion of African-American residents descended from workers on cotton plantations, were added to the district, as was an arm extending from Tuscaloosa roughly along the Interstate 20/59 corridor into Jefferson County to take in most of the black precincts of Birmingham. Most of Birmingham's white residents remained in the 6th District. The three representatives elected from the district following reconfiguration — Earl F. Hilliard, Artur Davis and Terri Sewell — have all been residents of Birmingham.

Mostly minor changes in the following two redistrictings have not substantially changed the shape of the district. But, western portions of Montgomery County have been restored to this district, including large swaths of inner-city Montgomery in the redistricting following the 2010 census. This area had earlier been removed after the 2000 census. The district contains urbanized areas of Birmingham, Montgomery and Tuscaloosa, and ten of the fourteen rural counties in the Black Belt. Three of the state's largest colleges are located in the district: Alabama State University in Montgomery, the University of Alabama in Tuscaloosa, and the University of Alabama at Birmingham.

A majority of voters in the district are African Americans who support the Democratic Party and its candidates.[citation needed] 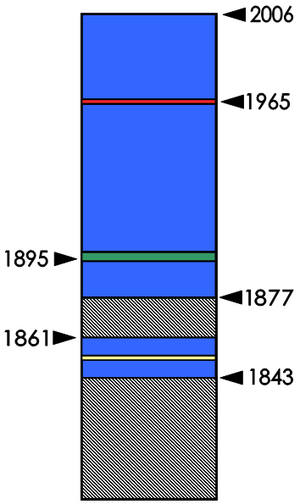 A graphical representation of party control of the district until 2006

As of April 2015[update], there are three former members of the U.S. House of Representatives from this district who are living. 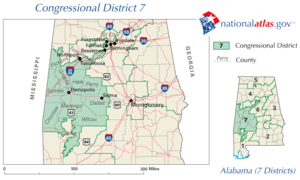