Mozyr or Mazyr (Belarusian: Мазы́р, pronounced [maˈzɨr]) is a city in Gomel Region of Belarus on the Pripyat River about 210 kilometres (130 miles) east of Pinsk and 100 kilometres (62 miles) northwest of Chernobyl and is located at approximately Lua error in Module:Coordinates at line 668: callParserFunction: function "#coordinates" was not found.. The population is 111,770 (2004 estimate). The total urban area including Kalinkavichy across the river has a population of 150,000. Mozyr is known as a center of oil refining, machine building, and food processing in Belarus. It is home to one of the largest oil refineries in Belarus, pumping out 18 million metric tons per year. The Druzhba pipeline carries crude oil from Russia splitting in two at Mazyr. One pipeline branch is directed into Poland and the other one to Ukraine.

The right bank of the Pripyat River, where the city is located, is elevated above the left bank at substantial heights (up to 80 metres (262 feet)). The overfall of surface of that scale is assumed to be a consequence of a glaciation: the Pripyat River is running right along the edge where an ancient glacier was located. Since both banks of the river are sandy, the right bank is cut through by a number of great ravines (more than 2.5 km (1.6 mi) length, up to 200 metres (656 feet) width). The city is also located on the ravines, so its streets look much like streets of a mountain town. One of the ravines is proclaimed a reserve. Some of the nearby ravines are currently also equipped with ski lifts and transformed into skiing winter resorts. 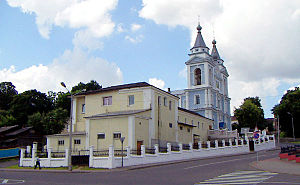 St. Michael's church and a former monastery of Cistercians in Mazyr

Mazyr once had a sizable Jewish population. During World War II, many Jews were executed by the Nazis in Mazyr. There are several memorials devoted to this in the modern city. As with other Soviet cities, during approximately the last 15 years of the Communist control, a large proportion of the remaining Jews have relocated abroad, mostly to Israel and USA.

In 1986, the city suffered from heavy radioactive fallout from the Chernobyl accident.

Mazyr is one of the oldest cities of historical Ruthenia. First mentioned in the mid-12th century as part of Duchy of Vladimir, and then the Duchy of Kiev. In the 13th century it was conquered by the Grand Duchy of Lithuania. Initially a small settlement, in the 15th century it was donated to Duke Michael Glinski, who converted it into a town. The city received town rights (Magdeburg Law) first from king Stefan Batory in 1577 and then from king Sigismund III of Poland in 1609. Despite having been destroyed by Russian forces twice (in 1525 and 1654), the city continued to grow and following the Union of Lublin it became a major administrative and trade centre, as well as a seat of a powiat ("county" office and court). In 1648 there was a conflict during the Khmelnytsky Uprising. Between 1723 and 1726 the Jesuits created a school in Mozyr under auspice of the Academy of Vilna. Following the suppression of the order in 1773 the school was secularised and continued to exist as a gymnasium. Among its most famous graduates are Edward Piekarski (linguist) and Władysław Mazurkiewicz (physician).

In 1793, following the Partitions of Poland, the town was annexed by Russia and its town rights were again confirmed in 1795. In the 19th century the town grew rapidly, mostly because of the Russian Pale of Settlement policy that allowed Jews to settle only in the lands once held by the Polish–Lithuanian Commonwealth. Because of that Mozyr grew to over 10 thousand inhabitants by the end of the century, most of them Jewish.

During the Polish-Soviet War of 1920 the town was captured by the Polish Army in the so-called Mozyr Operation. Polish 9th Infantry Division captured the city in a swift and daring manoeuvre that earned its commanding officer, Col. Władysław Sikorski (later Prime Minister of Poland) a promotion to general. In the course of the war the town was briefly recaptured by the Bolshevists, but in the aftermath of the battle of Warsaw it was again recaptured by the Polish forces of Gen. Stanisław Bułak-Bałachowicz, who proclaimed a short-lived Belarusian People's Republic on November 12, 1920. However, in the Riga Peace Treaty it was assigned to Soviet Russia and became part of the Byelorussian SSR. Since 1938 the town was a seat of Polesie region, however in 1954 it lost that status and was administratively attached to the region of Gomel.

In 2008 patients of the Mazyr mental hospital were spotted on camera playing a game of Russian roulette in the yard. One patient was killed, causing a lot of controversy about how they were able to access the gun. Police investigation resulted in uncovering one of the biggest in history network of arms dealers founded in 1995 by Viktor Bout. The dealers posed as mentally disabled and therefore could hardly be suspected in any criminal activity, and even if uncovered, could not be legally responsible or brought to court due to mental disability. One of the major weaknesses of the organization, known as "Katzmanaft", is that some members, while posing as being demented, are affected psychologically which results in the incidents such as happened in Mazyr mental hospital. Security guards were then questioned about the incident, but were not charged. It is also believed that the mental home is haunted and the local council is planning on closing it down.

Mozyr is a capital of a modern rock music of Gomel region, where since 2003 International Festival of Music is organized. There are Oil Refining Plant, brewery 'Речицкое пиво', multimedia company 'Fotolux' and Minsk newspaper 'Znamya Yunosti' (Russian:Знамя Юности)among sponsors of the Festival. Up to forty rock bands take stage in what become major cultural event. Local band Otrazhenie (Reflection), a pioneer and a leader of the Belorussian Hard Rock is a constant participant and a contributor to the festival.