The Russian Polikarpov I-153 Chaika (Russian Чайка, "Seagull") was a late 1930s Soviet biplane fighter. Developed as an advanced version of the I-15 with a retractable undercarriage, the I-153 fought in the Soviet-Japanese combats in Mongolia and was one of the Soviets' major fighter types in the early years of the Second World War. Several I-153s are still flying.

In 1937, the Polikarpov design bureau carried out studies to improve on the performance of its I-15 and I-15bis biplane fighters without sacrificing manoeuvrability, as Soviet tactical doctrine was based on a mix of high performance monoplane fighters (met by the Polikarpov I-16) and agile biplanes.[2] Early combat experience from the Spanish Civil War had shown that the I-16 had problems dealing with the Fiat CR.32 biplanes used by the Italian forces supporting the Nationalists, which suggested a need to continue the use of biplane fighters, and as a result, Polikarpov's proposals were accepted, and his design bureau was instructed to design a new biplane fighter. Polikarpov assigned the task to the design team led by Aleksei Ya Shcherbakov, who was assisted by Artem Mikoyan and Mikhail Gurevich (who would later set up the MiG design bureau).[3]

The new fighter (designated I-15ter by the design bureau and I-153 by the Soviet Air Forces (VVS)[4]) was based closely on the design of the I-15bis, with a stronger structure, but was fitted with a manually retractable undercarriage to reduce drag. It reverted to the "gulled" upper wing of the original I-15[nb 1] but used the Clark YH aerofoil of the I-15bis.[6] The four 7.62 mm PV-1 machine guns of the I-15bis were replaced by four ShKAS machine guns. While still rifle-calibre weapons, these fired much faster than the PV-1s, (1,800 rounds per minute rather than 750 rounds per minute[7]) giving a much greater weight of fire.[6] The new fighter was to be powered by a Shvetsov M-62 an improved derivative of the Shvetsov M-25 that powered the I-15 and I-15bis with twin superchargers.[8]

The aircraft was of mixed metal and wood construction, with the fuselage structure being based on chromium-molybdenum steel with duralumin skinning on the forward fuselage, and fabric covering on the fuselage aft of the front of the cockpit. The aircraft's wings were made of fabric covered wood, while the tail surfaces were of fabric covered duralumin.[9] The aircraft was fitted with a tailwheel undercarriage, with the mainwheels retracting rearwards, rotating through 90 degrees to lie flat in the wing roots, being actuated by cables operated by a pilot-driven handwheel. The solid rubber tailwheel did not retract, but moved in conjunction with the rudder.[2]

During 1939, production switched to a version powered by the originally planned M-62 engine, with an M-62 powered prototype undergoing state testing from 16 June 1939. While speed at sea level was virtually unchanged, the new engine improved performance at altitude.[10] A speed of 443 km/h (275 mph) at 4,600 m (15,100 ft) was recorded, with a service ceiling of 9,800 m (32,100 ft). This performance was disappointing, and caused the aircraft to fail the state acceptance trials, although this did not disrupt production.[11] While it was recognised that the I-153's performance was inadequate, the over-riding requirement was to not disrupt production until more advanced fighters could enter production.[10]

While numerous improvements were proposed, many were too radical to be implemented since the aircraft was already in production. Desperate to improve performance, Polikarpov tested two I-153 with the Shvetsov M-63 engine with 820 kW (1,100 hp). However, the results were disappointing and it was becoming painfully obvious that the biplane airframe was incapable of higher speeds.

One of the rarely mentioned characteristics of the I-153 was its poor performance in a spin. While the Polikarpov I-16 had gained notoriety for entering spins, pilots found it easy to recover from a spin. In contrast, while the I-153 was difficult to spin, once it lost control, recovery was difficult to the point where intentional spinning was forbidden for some time. A spin recovery procedure was eventually developed but, while effective, it required flawless timing and execution. 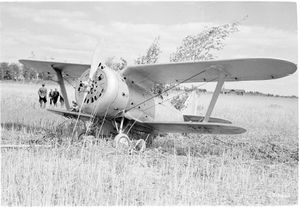 I-153 captured by Finnish forces after a forced landing. Photo taken in June, 1941

The I-153 first saw combat in 1939 during the Soviet-Japanese Battle of Khalkin Gol in Mongolia. The Japanese Army Air Forces' Type 97 Fighter (Nakajima Ki-27) Nate proved a formidable opponent for the I-15bis and I-16, but was more evenly matched with the I-153, which retained agility inherent to biplanes while featuring improved performance.[12] While the overall I-153 performance was satisfactory, some significant problems were revealed. Most troublesome was the absence of a firewall between the fuel tank mounted in front of the cockpit and the pilot. Combined with strong draft coming in through the wheel wells, fuel tank fires invariably resulted in rapid engulfment of the cockpit and severe burns to the pilot. In addition, the M-62 engine suffered from a service life of only 60–80 hours due to failures of the two-speed supercharger.[13]

Stalin's purges in the 1930s resulted in a tremendous lag in Soviet aircraft at the beginning of World War II.[citation needed] Although the new Yak-1 and LaGG-3 fighters were entering production, on 22 June 1941, the bulk of VVS was equipped with the obsolete 1930s designs including a large number of I-153.[14] Even as late as 1942, there were attempts to reinstate production of I-153 and I-16 to fill the shortage of fighter aircraft.[citation needed]

The Polikarpov I-153 Chaika never flew with any Spanish Air Force units during or after the Spanish Civil War. Two earlier variants of this aircraft, the I-15 and the I-15bis, did fly with the Republican Air Force during the conflict and, later, captured examples of both types were used by the Fuerzas Aéreas till the early 1950s.

While attempts to improve performance proved largely fruitless, Polikarpov had some success in upgrading the armament. The I-153 series underwent trials with two synchronized 12.7 mm (0.5 in) TKB-150 (later designated Berezin BS) machine guns, and about 150 aircraft were built with a single TKB-150 in the fuselage and two ShKAS in the wings (a single TKB-150 was used because of the shortage of this weapon which was shared with I-16 Type 29). Late in production, about 400 aircraft were modified with metal plates under the wings to accommodate RS-82 unguided rockets.

In the early 1990s, New Zealand pilot and entrepreneur Tim Wallis' Alpine Fighter Collection organised the restoration of three I-153s and six I-16s to an airworthy condition, this project being completed in 1999 as the third and final I-153 arrived in New Zealand. These aircraft were equipped with AZsh-62IR geared radials instead of the M-62, which were non-geared. The reason is that AZsh-62IR is just a version of M-62, with absolute equality in all instead of a frontal gearbox and weapon synchronizer absence. Also, none of original engines from recovered wrecks could have been brought to life. 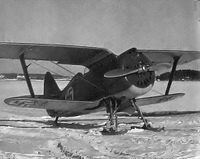 A Finnish Air Force Polikarpov I-153.

Data from Of Chaika and Chato...Polikarpov's Fighting Biplanes"[10]