The Tupolev TB-3 (Russian: Тяжёлый Бомбардировщик, Tyazholy Bombardirovschik, Heavy Bomber, civilian designation ANT-6) was a heavy bomber aircraft which was deployed by the Soviet Air Force in the 1930s and during World War II. It was the world's first cantilever wing four-engine heavy bomber.[2] Despite obsolescence and being officially withdrawn from service in 1939, the TB-3 performed bomber and transport duties throughout much of World War II. The TB-3 also saw combat as a Zveno project fighter mothership and as a light tank transport.

In 1925, the Soviet Air Force approached TsAGI with a requirement for a heavy bomber with total engine output of 2,000 PS (1,970 hp) and either wheeled or float landing gear. Tupolev OKB started design work in 1926 with the government operational requirements finalized in 1929.[2][3] The Tupolev TB-1 was taken as the basis for the design and the aircraft was initially powered by Curtiss V-1570 "Conqueror" engines generating 600 PS (590 hp) each,[4] with the intent of switching to Mikulin M-17s (modified BMW VIs) in production.[2][5] The mock-up was approved on 21 March 1930 and the first prototype was completed on 31 October 1930.[6] The aircraft flew on 22 December 1930 with Mikhail Gromov at the controls and with ski landing gear. Despite almost crashing owing to vibration causing the throttles to close, the test flight was a success.[2][4] On 20 February 1931, the Soviet Air Force approved mass production of the ANT-6 with M-17 engines.[6]

The prototype was refitted with BMW VIz 500 engines of 730 PS (720 hp) each, larger radiators, and wooden fixed-pitch propellers of TsAGI design. Single-wheel landing gear was deemed too weak and was replaced by tandem bogies with 1,350×300 mm (53×12 in) tires.[2] The first pre-production TB-3-4M-17 flew on 4 January 1932 with A. B. Yumashev and I. F. Petrov at the controls. Unexpectedly, subsequent mass-produced aircraft were found to be 10–12% heavier than the prototype, which significantly hampered performance.[2] The discrepancy was discovered to be due to high positive tolerances on raw materials which resulted in steel sheetmetal, pipes, and wires being much thicker than on the carefully constructed prototypes. The aircraft were also more crudely painted with a thick layer of camouflage and lacquer.[2][7] The factories asked the workers for suggestions on reducing the weight, paying 100 roubles for each kilogram (2.2 lb) removed from the aircraft. In combination with OKB efforts, this resulted in weight savings of almost 1,000 kilograms (2,200 lb). Despite this, production aircraft could differ from each other by as much as several hundred kilograms.[2][7][8]

In 1933, a single TB-3-4M-17F was streamlined with removal of turrets and bomb shackles, covering of all openings, and fitting of wheel spats. This resulted in only a 4.5% increase in top speed and a similar increase in the range. Tupolev concluded that streamlining was minimally beneficial for large and slow aircraft. To study the effect of corrugated skin, in January–February 1935 a single TB-3-4AM-34R had the corrugations incrementally covered with fabric. This resulted in a 5.5% gain in top speed and a 27.5% increase in the ceiling. The same aircraft demonstrated a significant increase in climb rate when fitted with experimental four-blade propellers.[2][9]

The TB-3 was an all-metal aircraft of steel construction. The frame was composed of V-section beams covered with non-stressed corrugated skin ranging from 0.3 to 0.8 mm (1/64 to 1/32 in) in thickness. The corrugations were 13 mm deep (0.51 in) and 50 millimetres (2.0 in) apart. The cantilever wing was supported by four tube-section spars. In 1934, thanks to the development of stronger steel alloys, the wingspan was increased from 39.5 to 41.85 metres (129.6 to 137.3 ft) with a concurrent wing area increase from 230 to 234.5 m² (2,475 to 2,524 ft²). Any part of the aircraft could be walked on in soft shoes without damaging the skin, and the leading edges of the wings swung down to form walkways for engine maintenance. Controls were cable-actuated with a variable-incidence tailplane and a trim compensation system in case of engine failures on one side. Fixed main landing gear was not fitted with brakes. The fuel tanks did not have fire or leak protection, although the engines had an internal fire-extinguishing system. The M-17 engines were tuned to provide a maximum theoretical range of 3,250 kilometres (1,750 nmi; 2,020 mi) without spark plug or carburetor fouling. Defensive armament consisted of light machine guns in five turrets — one in the nose, two on top of mid-fuselage, and one retractable "dustbin" under each wing between the engine nacelles. Later variants moved one of the top fuselage turrets aft of the tail fin.[2] 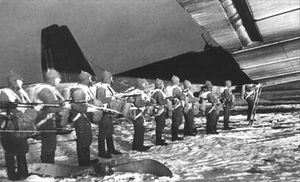 The TB-3 was used operationally during the Battle of Khalkhin Gol against Japan and in the Winter War with Finland. Although it was officially withdrawn from service in 1939, at the start of the Great Patriotic War on 22 June 1941, the Soviet Air Force had 516 operational TB-3s, with an additional 25 operated by the Soviet Navy.[11] Stationed far from the USSR's western border, the ТB-3s avoided catastrophic losses during the first German air strikes, after which TB-3s from 3rd TBAP (Heavy Bomber Regiment) began flying night bombing missions on 23 June. A shortage of combat-ready aircraft also required daytime use of TB-3s without fighter escort and in this role the bombers, operating at low-to-medium altitudes, suffered heavy losses to enemy fighters and ground fire. By August 1941, TB-3s made up 25% of the Soviet bomber force and, operated by elite air force crews, were flying up to three combat missions per night.[11] The aircraft participated in all major battles through 1943, including the first Battle of Smolensk, the Battle of Moscow, the Battle of Stalingrad, the Siege of Leningrad, and the Battle of Kursk. On 1 July 1945, 18th Air Army still had ten TB-3s on the active roster.[11]

The TB-3 served extensively as a cargo and paratroop transport, carrying up to 35 soldiers in the latter role.[2] In the first five months of the war, the aircraft transported 2,797 tons of cargo and 2,300 personnel.[11]

The TB-3 was also used in several special projects as a fighter mothership in the Zveno project and for delivering light T-27, T-37, and T-38 tanks. On 1 August 1941, a pair of TB-3s in Zveno-SPB configuration, each with two Polikarpov I-16 fighters carrying a pair of 250 kilograms (550 lb) bombs, destroyed an oil depot with no losses in the port of Constanța, Romania.[11] On 11 August and 13 August 1941, Zveno-SPB successfully damaged the King Carol I Bridge over the Danube in Romania.[11] Zveno operations ended in the autumn of 1942 due to high vulnerability of the motherships.[citation needed]

In recognition of the role TB-3 played during the war, three aircraft were included in the first post-war air parade on 18 June 1945.[11] 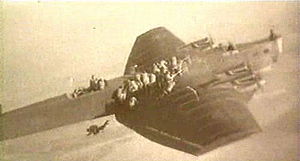 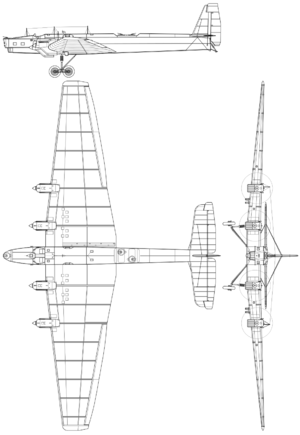