Sami /ˈsɑːmi/[3] is a group of Uralic languages spoken by the Sami people in Northern Europe (in parts of northern Finland, Norway, Sweden and extreme northwestern Russia). There are, depending on the nature and terms of division, ten or more Sami languages. Several names are used for the Sami languages: Saami, Sámi, Saame, Samic, Saamic, as well as the exonyms Lappish and Lappic. The last two, along with the term Lapp, are now often considered derogatory.[4]

The Sami languages form a branch of the Uralic language family. According to the traditional view, Sami is within the Uralic family most closely related to the Finnic languages (Sammallahti 1998). However, this view has recently been doubted by some scholars, who argue that the traditional view of a common Finno-Sami protolanguage is not as strongly supported as had been earlier assumed,[5] and that the similarities may stem from an areal influence on Sami from Finnic.

In terms of internal relationships, the Sami languages are divided into two groups: western and eastern. The groups may be further divided into various subgroups and ultimately individual languages. (Sammallahti 1998: 6-38.) Parts of the Sami language area form a dialect continuum in which the neighbouring languages may be mutually intelligible to a fair degree, but two more widely separated groups will not understand each other's speech. There are, however, some sharp language boundaries, in particular between Northern Sami, Inari Sami and Skolt Sami, the speakers of which are not able to understand each other without learning or long practice. The evolution of sharp language boundaries seems to suggest a relative isolation of the language speakers from each other and not very intensive contacts between the respective speakers in the past. There is some significance in this, as the geographical barriers between the respective speakers are no different from those in other parts of the Sami area. 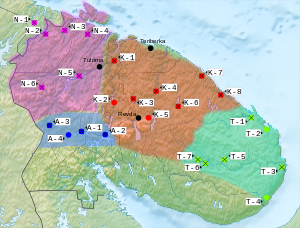 Note that the above figures are approximate.

The Sami languages are spoken in Sápmi in Northern Europe, in a region stretching over the four countries Norway, Sweden, Finland and Russia, reaching from the southern part of central Scandinavia in the southwest to the tip of the Kola Peninsula in the east. The border between the languages does not follow the political borders.

During the Middle Ages and Early Modern Age now extinct Sami languages were also spoken in the central and southern parts of Finland and Karelia and in a wider area on the Scandinavian peninsula. Historical documents as well as Finnish and Karelian oral tradition contain many mentions of the earlier Sami inhabitation in these areas (Itkonen, 1947). Also, loanwords as well as place-names of Sami origin in the southern dialects of Finnish and Karelian dialects testify of earlier Sami presence in the area (Koponen, 1996; Saarikivi, 2004; Aikio, 2007). These Sami languages, however, became extinct later, under the wave of the Finno-Karelian agricultural expansion.

The Proto-Samic language is believed to have formed in the vicinity of the Gulf of Finland between 1000 BC to 700 AD, deriving from a common Proto-Sami-Finnic language (M. Korhonen 1981).[16] However reconstruction of any basic proto-languages in the Uralic family have reached a level close to or identical to Proto-Uralic (Salminen 1999).[17] According to the comparative linguist Ante Aikio, the Proto-Samic language developed in South Finland or in Karelia around 2000–2500 years ago, spreading then to northern Fennoscandia.[18] The language is believed to have expanded west and north into Fennoscandia during the Nordic Iron Age, reaching central Scandinavia during the Proto-Scandinavian period ca. 500 AD (Bergsland 1996).[19] The language assimilated several layers of unknown Paleo-European languages from the early hunter gatherers, first during the Proto-Sami phase and second in the subsequent expansion of the language in the west and the north of Fennoscandia that is part of modern Sami today. (Aikio 2004, Aikio 2006).[18][20]

At present there are nine living Sami languages. The largest six of the languages have independent literary languages; the three others have no written standard, and of them, there are only a few, mainly elderly speakers left. The ISO 639-2 code for all Sami languages without its proper code is "smi". The six written languages are:

The other Sami languages are critically endangered or moribund and have very few speakers left. Pite Sami has about 30–50 speakers,[22] and a dictionary and an official orthography is under way. A descriptive grammar (Wilbur 2014) has been published. Ume Sami likely has under 20 speakers left,[citation needed] and ten speakers of Ter Sami were known to be alive in 2004.[23] The last speaker of Akkala Sami is known to have died in December 2003,[24] and the eleventh attested variety, Kemi Sami, became extinct in the 19th century. An additional Sami language, Kainuu Sami, became extinct in the 18th century, and probably belonged to the Eastern group like Kemi Sami, although the evidence for the language is limited.

The Sami languages use Latin alphabets.

Note that the letter Đ is a capital D with a bar across it (Unicode U+0110) also used in Serbo-Croatian etc., and is not the capital eth (Ð; U+00D0) found in Icelandic, Faroese or Old English, to which it is almost identical.

Adopted in April 1988, Article 110a of the Norwegian Constitution states: "It is the responsibility of the authorities of the State to create conditions enabling the Sami people to preserve and develop its language, culture and way of life". The Sami Language Act went into effect in the 1990s. Sami is an official language of the municipalities of Kautokeino, Karasjok, Gáivuotna (Kåfjord), Nesseby, Porsanger, Tana, Tysfjord, Lavangen and Snåsa. 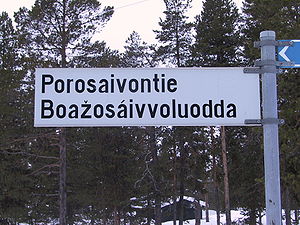 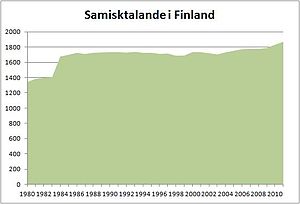 On 1 April 2002, Sami became one of five recognized minority languages in Sweden. It can be used in dealing with public authorities in the municipalities of Arjeplog, Gällivare, Jokkmokk, and Kiruna. In 2011, this list was enlarged considerably. In Sweden the Umeå and Uppsala Universities have courses in North Sami, and Umeå University also teaches Ume Sami and South Sami.

In Russia, Sami has no official status. Sami has been taught at the Murmansk University since 2012; before then, Sami was taught at the Institutе of Peoples of the North (Институт народов севера) in Saint Petersburg (Leningrad).