Vowel harmony is a type of long-distance assimilatory phonological process involving vowels that occurs in some languages. In languages with vowel harmony, there are constraints on which vowels may be found near each other. Many agglutinative languages have vowel harmony.

The term vowel harmony is used in two different senses.

In the first sense, it refers to any type of long distance assimilatory process of vowels, either progressive or regressive. When used in this sense, the term vowel harmony is synonymous with the term metaphony.

In the diagram above, the Va (type-a vowel) causes the following Vb (type-b vowel) to assimilate and become the same type of vowel (and thus they become, metaphorically, "in harmony").

The vowel that causes the vowel assimilation is frequently termed the trigger while the vowels that assimilate (or harmonize) are termed targets. When the vowel triggers lie within the root or stem of a word and the affixes contain the targets, this is called stem-controlled vowel harmony (the opposite situation is called dominant).[1] This is fairly common amongst languages with vowel harmony[citation needed] and may be seen in the Hungarian dative suffix:

In many languages, vowels can be said to belong to particular sets or classes, such as back vowels or rounded vowels. Some languages have more than one system of harmony. For instance, Altaic languages are proposed to have a rounding harmony superimposed over a backness harmony.

Even amongst languages with vowel harmony, not all vowels need participate in the vowel conversions; these vowels are termed neutral. Neutral vowels may be opaque and block harmonic processes or they may be transparent and not affect them.[2] Intervening consonants are also often transparent.

Finally, languages that do have vowel harmony often allow for lexical disharmony, or words with mixed sets of vowels even when an opaque neutral vowel is not involved. van der Hulst & van de Weijer (1995) point to two such situations: polysyllabic trigger morphemes may contain non-neutral vowels from opposite harmonic sets and certain target morphemes simply fail to harmonize.[3] Many loanwords exhibit disharmony. For example, Turkish vakit, ('time' [from Arabic waqt]); *vakıt would have been expected.

There are three classes of vowels in Korean: positive, negative, and neutral. These categories loosely follow the front (positive) and mid (negative) vowels. Traditionally, Korean had strong vowel harmony; however, this rule is no longer observed strictly in modern Korean. In modern Korean, it is only applied in certain cases such as onomatopoeia, adjectives, adverbs, conjugation, and interjections. The vowel ㅡ(eu) is considered a partially neutral and a partially negative vowel. There are other traces of vowel harmony in modern Korean: many native Korean words tend to follow vowel harmony such as 사람 (sa·ram), 'person', and 부엌 (bu·eok), 'kitchen'.

Azerbaijani's system of vowel harmony has both front/back and rounded/unrounded vowels.[5]

Tatar has no neutral vowels. The vowel é is found only in loanwords. Other vowels also could be found in loanwords, but they are seen as Back vowels. Tatar language also has a rounding harmony, but it isn't represented in writing. O and ö could be written only in the first syllable, but vowels they mark could be pronounced in the place where ı and e are written.

Kazakh's system of vowel harmony is primarily a front/back system, but there is also a system of rounding harmony that is not represented by the orthography, which strongly resembles the system in Kyrgyz.

Kyrgyz's system of vowel harmony is primarily a front/back system, but there is also a system of rounding harmony.

Turkish has a 2-dimensional vowel harmony system, where vowels are characterised by two features: [±front] and [±rounded]. There are two sets of vocal harmony systems: a simple one and a complex one. The simple one is concerned with the low vowels e, a and has only the [±front] feature (e front vs a back). The complex one is concerned with the high vowels i, ü, ı, u and has both [±front] and [±rounded] features (i front unrounded vs ü front rounded and ı back unrounded vs u back rounded). The close-mid vowels ö, o are not involved in vocal harmony processes.

Turkish has two classes of vowels – front and back. Vowel harmony states that words may not contain both front and back vowels. Therefore, most grammatical suffixes come in front and back forms, e.g. Türkiye'de "in Turkey" but Almanya'da "in Germany".

In addition, there is a secondary rule that i and ı tend to become ü and u respectively after rounded vowels, so certain suffixes have additional forms. This gives constructions such as Türkiye'dir "it is Turkey", kapıdır "it is the door", but gündür "it is day", paltodur "it is the coat".

Compound words are considered separate words with respect to vowel harmony: vowels do not have to harmonize between members of the compound (thus forms like bu|gün "this|day" = "today" are permissible).

Vowel harmony does not apply for loanwords and some invariant suffixes (such as -iyor).

There are also a few native modern Turkish words that do not follow the rule (such as anne "mother" or kardeş "sibling" which used to obey vowel harmony in their older forms, ana and karındaş, respectively). In such words, suffixes harmonize with the final vowel; thus İstanbul'dur "it is İstanbul".

Hungarian, like its distant relative Finnish, has the same system of front, back, and intermediate (neutral) vowels but is more complex than the one in Finnish, and some vowel harmony processes. The basic rule is that words including at least one back vowel get back vowel suffixes (karba – in(to) the arm), while words excluding back vowels get front vowel suffixes (kézbe – in(to) the hand). One vowel words including only the neutral vowels i, í or é are unpredictable (not in case of e which surely gets front vowel suffix).

One essential difference in classification between Hungarian and Finnish is that standard Hungarian (along with 3 out of 10 local dialects) does not observe the difference between Finnish 'ä' [æ] and 'e' [e] – the Hungarian front vowel 'e' [æ] is pronounced as the Finnish front vowel 'ä' [æ]. 7 out of the 10 local dialects have the vowel ë [e] which has never been part of the Hungarian alphabet, and thus is not used in practice.

Some other rules and guidelines to consider:

Grammatical suffixes in Hungarian can have one, two or three forms:

An example on basic numerals: 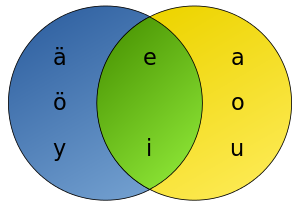 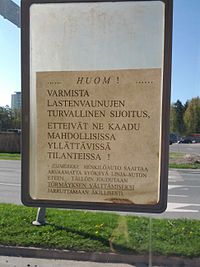 In the Finnish language, there are three classes of vowels – front, back, and neutral, where each front vowel has a back vowel pairing. Grammatical endings such as case and derivational endings – but not enclitics – have only archiphonemic vowels U, O, A, which are realized as either back [u, o, a] or front [y, ø, æ] inside a single word. From vowel harmony it follows that the initial syllable of each single (non-compound) word controls the frontness or backness of the entire word. Non-initially, the neutral vowels are transparent to and unaffected by vowel harmony. In the initial syllable:

Some dialects that have a sound change opening diphthong codas also permit archiphonemic vowels in the initial syllable. For example, standard 'ie' is reflected as 'ia' or 'iä', controlled by noninitial syllables, in the Tampere dialect, e.g. tiä ← tie but miakka ← miekka.

... as evidenced by tuotteessa (not *tuotteessä). Even if phonologically front vowels precede the suffix -nsa, grammatically it is preceded by a word controlled by a back vowel. As shown in the examples, neutral vowels make the system unsymmetrical, as they are front vowels phonologically, but leave the front/back control to any grammatical front or back vowels. There is little or no change in the actual vowel quality of the neutral vowels.

As a consequence, Finnish speakers often have problems with pronouncing foreign words which do not obey vowel harmony. For example, olympia is often pronounced olumpia. The position of some loans is unstandardized (e.g. chattailla/chättäillä ) or ill-standardized (e.g. polymeeri, sometimes pronounced polumeeri, and autoritäärinen, which violate vowel harmony). Where a foreign word violates vowel harmony by not using front vowels because it begins with a neutral vowel, then last syllable generally counts, although this rule is irregularly followed.[7] Experiments indicate that e.g. miljonääri always becomes (front) miljonääriä, but marttyyri becomes equally frequently both marttyyria (back) and marttyyriä (front), even by the same speaker.

With respect to vowel harmony, compound words can be considered separate words. For example, syyskuu ("autumn month" i.e. September) has both u and y, but it consists of two words syys and kuu, and declines syys·kuu·ta (not *syyskuutä). The same goes for enclitics, e.g. taaksepäin "backwards" consists of the word taakse "to back" and -päin "-wards", which gives e.g. taaksepäinkään (not *taaksepäinkaan or *taaksepainkaan). If fusion takes place, the vowel is harmonized by some speakers, e.g. tälläinen pro tällainen ← tämän lainen.

Some Finnish words whose stems contain only neutral vowels exhibit an alternating pattern in terms of vowel harmony when inflected or forming new words through derivation. Examples include meri "sea", meressä "in the sea" (inessive), but merta (partitive), not *mertä; veri "blood", verestä "from the blood" (elative), but verta (partitive), not *vertä; pelätä "to be afraid", but pelko "fear", not *pelkö; kipu "pain", but kipeä "sore", not *kipea.

Helsinki slang has slang words that have roots violating vowel harmony, e.g. Sörkka. This can be interpreted as Swedish influence.

Standard Estonian has lost its vowel harmony, the front vowels occurring only in the first (stressed) syllable. However vowel harmony exists in Võro, a dialect of South Estonian.

Vowel harmony is present in all Yokutsan languages and dialects. For instance, Yawelmani has 4 vowels (which additionally may be either long or short). These can be grouped as in the table below.

In addition to the harmony found in suffixes, there is a harmony restriction on word stems where in stems with more than one syllable all vowels are required to be of the same lip rounding and tongue height dimensions. For example, a stem must contain all high rounded vowels or all low rounded vowels, etc. This restriction is further complicated by (i) long high vowels being lowered and (ii) an epenthetic vowel [i] which does not harmonize with stem vowels.

There is some evidence for vowel harmony according to vowel height or ATR in the prefix i3/e- in inscriptions from pre-Sargonic Lagash (the specifics of the pattern have led a handful of scholars to postulate not only an /o/ phoneme, but even an /ɛ/ and, most recently, an /ɔ/)[8] Many cases of partial or complete assimilation of the vowel of certain prefixes and suffixes to one in the adjacent syllable are reflected in writing in some of the later periods, and there is a noticeable though not absolute tendency for disyllabic stems to have the same vowel in both syllables.[9] What appears to be vowel contraction in hiatus (*/aa/, */ia/, */ua/ > a, */ae/ > a, */ue/ > u, etc.) is also very common.

Vowel harmony occurs to some degree in many other languages, such as

Other types of harmony

Some languages have harmony processes that involve an interaction between vowels and consonants. For example, Chilcotin has a phonological process known as vowel flattening (i.e. post-velar harmony) where vowels must harmonize with uvular and pharyngealized consonants.

Chilcotin has two classes of vowels:

Additionally, Chilcotin has a class of pharyngealized "flat" consonants [tsˤ, tsʰˤ, tsʼˤ, sˤ, zˤ]. Whenever a consonant of this class occurs in a word, all preceding vowels must be flat vowels.

If flat consonants do not occur in a word, then all vowels will be of the non-flat class:

Other languages of this region of North America (the Plateau culture area), such as St'át'imcets, have similar vowel-consonant harmonic processes.

Syllabic synharmony was a process in the Proto-Slavic language ancestral to all modern Slavic languages. It refers to the tendency of frontness (palatality) to be generalised across an entire syllable. It was therefore a form of consonant–vowel harmony in which the property 'palatal' or 'non-palatal' applied to an entire syllable at once rather than to each sound individually.