Zerstörergeschwader 76 (ZG 76) was a Zerstörer (heavy fighter; lit. "destroyer") geschwader (equivalent to a wing or group) of the German Luftwaffe during World War II. 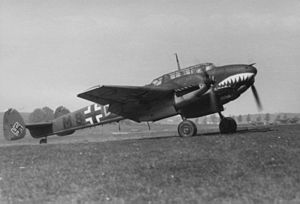 Zerstörergeschwader 76 was formed on 1 May 1939 with the I. Gruppe and II. Gruppe without a Geschwaderstab. The II. Gruppe was initially equipped with the Messerschmitt Bf 109 and was known as Jagdgruppe 176. The Geschwaderstab was created on 15 April 1940 in Köln-Wahn. The III. Gruppe was raised on 26 June 1940 in Trier-Euren.

On 1 September 1939 Germany attacked Poland although bad weather initially precluded a large scale deployment of ZG 76. I./ZG 76 engaged Polish fighters formations and made their first claims, although also suffered their first losses. Future 'ace' Leutnant Helmut Lent participated in the attack on Poland, destroying several aircraft on the ground and a PZL P.11 fighter in the air on 3 September 1939 for his and (I./ZG 76) first victory. However, on 12 September, following the destruction of an aircraft on the ground he was attacked by another fighter and his starboard engine was hit and put out of action. This necessitated a forced-landing, fortunately behind his own lines, in which he received minor injuries.

On 29 September, I./ZG 76 was withdrawn to the Stuttgart area to provide Reichsverteidigung (Defense of the Reich) against the Western Allied Air Forces. I./ZG 76 claimed 31 kills during the campaign, of which 19 were confirmed.

On 18 December 1939 the Royal Air Force (RAF) sent a force of Vickers Wellingtons to raid Wilhelmshaven during the day. I./ZG 76 under Hptm. Gunther Reinecke, intercepted. Staffelkapitän of 2./ZG 76, Wolfgang Falck, and wingman Uffz. Heinz Fresia were the first to engage, claiming two Wellingtons each, though Falck's aircraft was hit by defending fire and he crash-landed on Wangerooge. Others of I./ZG 76 intercepted at intervals, unit claims totalling 15 Wellingtons shot down. The RAF lost 12, with total Luftwaffe unconfirmed claims being 38.

I./ZG 76 then supported the landings in Norway with 1. Staffel charged with gaining air superiority over Oslo prior to landings there by Junkers Ju 52 transports. Before reaching Oslo they were attacked by Norwegian Air Force Gloster Gladiators and lost two aircraft. Oblt. Gordon Gollob led 3./ZG 76 to Stavanger-Sola airfield. Two Bf-110's collided and crashed into the sea with both crews killed. During April, I./ZG 76 encountered RAF bombers on several occasions and victories were claimed by Wolfgang Falck, Helmut Lent and Helmut Woltersdorf. On 30 April I./ZG 76's Gruppenkommandeur Hptm. Gunther Reinecke was shot down following combat with a Bristol Blenheim. The Gruppe lost two 'experten' when Lt. Helmut Fahlbusch and Ofw. Georg Fleischmann were killed against RAF bombers. The Staffelkapitän of 1. Staffel, Werner Hansen, took over temporary command of the Gruppe until the new Gruppenkommandeur, Hptm. Werner Restermeyer was posted on 11 May. Lt. Helmut Lent recorded four victories during the campaign in Norway and was promoted to Oberleutnant on 1 July.

During the Battle of France ZG 76 saw intensive action resulting in losses against Allied fighters. Major Walter Grabmann, Geschwaderkommodore of ZG 76 was shot down on 18 May. He survived and re-joined the unit after a period of captivity. Oblt. Heinz Nacke, Staffelkapitän of 6./ZG 76, gained his initial success on 12 May 1940, when he shot down a Morane-Saulnier M.S.406 fighter. He added a further eight victories during the campaign.

During the Battle of Britain, II./ZG 76, stationed in Northern France, flew escort for bomber units attacking Southern England. Losses however mounted quickly. On 11 July III./ZG 76 were over the Channel as escort to Ju-87s. The Bf 110s came under fierce attack by RAF fighters, and Lt. Friedrich-Wolfgang Graf von und zu Castell (7.Staffel) was killed while Staffelkapitän of 9.Staffel, Oblt. Gerhard Kadow force-landed inland of the English coast; the most notable loss however was the nephew of Hermann Göring, Oblt. Hans-Joachim Goring, crashed fatally near Portland. One other Bf 110 was lost.

On 15 August, II./ZG 76 were heavily involved in action over the Channel as escorts to the Ju 88s of Lehrgeschwader 1. Under heavy attack from RAF squadrons and the unit lost 6 Bf-110’s, with another 2 written off in France. III./ZG 76 later flew escort to Ju-87s. While protecting their charges, III. gruppe lost 4 aircraft, including Gruppenkommandeur Hptm. Friedrich-Karl Dickore. His place was taken by Rolf Kaldrack of 7.Staffel.

Further North, Luftflotte 5 made its initial entry into the Battle. Operating from Scandinavia, 34 Bf-110s of I./ZG 76 escorted 65 Heinkel He 111s of KG 26 raiding the North East coast airfields. Several RAF squadrons intercepted the raiders over the North Sea. Gruppenkommandeur Hptm. Werner Restermeyer and 6 others of I gruppe were shot down.[1] The losses thus suffered resulted in I./ZG 76 taking no further direct part in the Battle and the unit was eventually recalled to Germany to be converted to a night fighter role.

On 30 August 1940 Oblt. Nacke claimed three Hawker Hurricanes shot down, and was awarded the Knight's Cross of the Iron Cross in November 1940 for 12 victories.

The Anglo-Iraqi War saw the Luftwaffe commit 4./ZG 76 as part of a small air component covering the Iraqi Nationalist forces as part of Fliegerführer Irak in early May 1941. The campaign lasted a mere ten days, with two RAF Gloster Gladiators claimed by future night fighter Experten Lt. Martin Drewes. By 26 May no Bf 110s remained serviceable and all Luftwaffe personnel were evacuated.

II. Gruppe became the III. Gruppe of Nachtjagdgeschwader 3 on 1 November 1941.

At the same time the Geschwaderstab became the Jagdfliegerführer Norwegen and III. Gruppe was disbanded.

In the autumn of 1943 most day Zerstörergruppen were recalled from the Eastern Front and Mediterranean and formed into Reich defence units. The ZG 76 Geschwader was reformed again in August 1943 under the experienced Major Theodor Rossiwall. The Geschwaderstab and I. Gruppe were raised in Ansbach, the II. Gruppe in Wertheim and III. Gruppe in November in Öttingen. The formation of III. Gruppe was never completed, and in April 1944 the personnel were incorporated into I./ZG 76.

I. and III./ZG 76 were based in Austria, and II./ZG 76 based in France. Hpt. Herbert Kaminski ( 7 kills) was appointed Gruppenkommandeur of II./ZG 76 on 5 October 1943 and led the Gruppe until 9 August 1944 on Reichsverteidigung operations.

On 4 October 1943 I. and II./ZG 76 attacked a formation of USAAF heavy bombers on missions to Frankfurt and Wiesbaden. They were in turn intercepted by P-47s of the 56th Fighter Group over the Eifel mountains and 7 of the 40 Bf 110G-2s shot down. The Bf 110s against this formation destroyed 4 B-17s.

II./ZG 76 were one of the last two of the day Zerstörergruppen operational and were stationed in Czechoslovakia and then East Prussia by August–October 1944. Although the unit was meant to convert to the FW-190 as II./JG 76, in reality the pilots were distributed among numerous existing fighter units by the end of 1944.