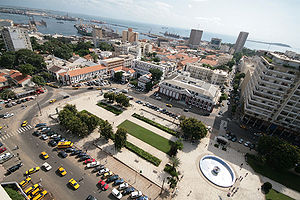 Dakar, Senegal's place de l'Indépendance: a center of government, banking and trade. In the background is the commercial port and the tourist area, Gorée island. 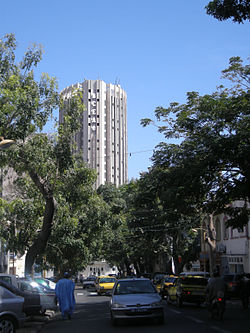 The headquarters of the Central Bank of West African States, Dakar. 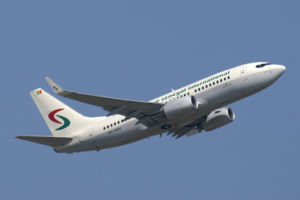 A jet of the national airline, Air Senegal International. 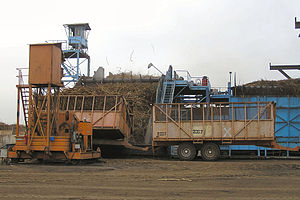 A sugar processing plant of the Compagnie sucrière sénégalaise at Richard Toll. 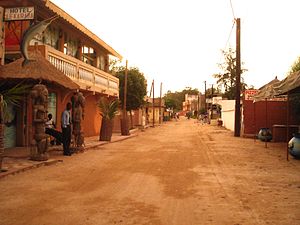 The main street of the tourist resort town of Saly. 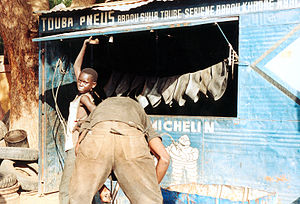 Many small businesses, like this tyre repair shop in Touba, are financed through the Mouride Islamic brotherhood. 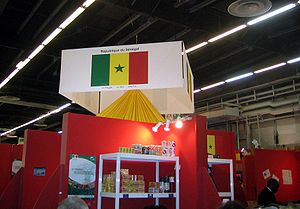 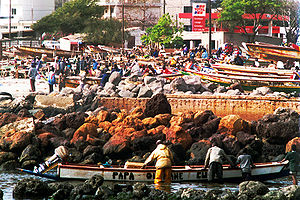 Small scale fishing for local markets is visible all through the country. Here fishermen return to the beach at Soumbedioun, Dakar. 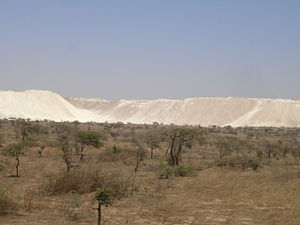 A Rock phosphate surface mine in western Senegal, near Taïba.

Predominantly rural and with limited natural resources, the Economy of Senegal gains most of its foreign exchange from fish, phosphates, groundnuts, tourism, and services. The agricultural sector of Senegal is highly vulnerable to variations in rainfall and changes in world commodity prices. The former capital of French West Africa, is also home to banks and other institutions which serve all of Francophone West Africa, and is a hub for shipping and transport in the region.

Senegal also has one the best developed tourist industries in Africa. Senegal depends heavily on foreign assistance, which in 2000 represented about 32% of overall government spending—including both current expenditures and capital investments—or CFA 270.8 billion (U.S$. 361.0 million). Senegal is a member of the World Trade Organization.

Since the January 1994 CFA franc devaluation, the International Monetary Fund (IMF), the World Bank, and other multilateral and creditors have been supporting the Government of Senegal’s structural and sectoral adjustment programs. The broad objectives of the program have been to facilitate growth and development by reducing the role of government in the economy, improving public sector management, enhancing incentives for the private sector, and reducing poverty.

In January 1994, Senegal undertook a bold and ambitious economic reform program with the support of the international donor community. This reform began with a 50% devaluation of Senegal's currency, the CFA franc, which was linked at a fixed rate to the French franc. Government price controls and subsidies have been steadily dismantled as another economic reform.

This currency devaluation had severe social consequences, because most essentials goods were imported. Overnight, the price of goods such as milk, rice, fertilizer and machinery doubled. As a result, Senegal suffered a large exodus, with many of the most educated people and those who could afford it choosing to leave the country.

After an economic contraction of 2.1% in 1993, Senegal made an important turnaround, thanks to the reform program, with a growth in GDP averaging over 5% annually during 1995-2004. Annual inflation had been pushed down to the low single digits.

As a member of the West African Economic and Monetary Union (WAEMU), Senegal is working toward greater regional integration with a unified external tariff and a more stable monetary policy. Senegal still relies heavily upon outside donor assistance, however. Under the IMF's Highly Indebted Poor Countries debt relief program, Senegal will benefit from eradication of two-thirds of its bilateral, multilateral, and private sector debt, contingent on the completion of privatization program proposed by the government and approved by the IMF.

Phosphate production, the second major foreign exchange earner, has been steady at about U.S.$95 million. Exports of peanut products reached U.S.$79 million in 2000 and represented 11% of total export earnings. Receipts from tourism, the fourth major foreign exchange earner, have picked up since the January 1994 devaluation. In 2000, some 500,000 tourists visited Senegal, earning the country $120 million.

Senegal’s new Agency for the Promotion of Investment (APIX) plays a pivotal role in the government’s foreign investment program. Its objective is to increase the investment rate from its current level of 20.6% to 30%. Currently, there are no restrictions on the transfer or repatriation of capital and income earned, or investment financed with convertible foreign exchange. Direct U.S. investment in Senegal remains about U.S.$38 million, mainly in petroleum marketing, pharmaceuticals manufacturing, chemicals, and banking. Economic assistance, about U.S.$350 million a year, comes largely from France, the IMF, the World Bank, and the United States. Canada, Italy, Japan, and Germany also provide assistance.

With an external debt of U.S.$2,495 million,[2] and with its economic reform program on track, Senegal qualified for the multilateral debt relief initiative for Heavily Indebted Poor Countries (HIPC). Progress on structural reforms is on track, but the pace of reforms remains slow, as delays occur in implementing a number of measures on the privatization program, good governance issues, and the promotion of private sector activity.

Macroeconomic indicators show that Senegal turned in a respectable performance in meeting IMF targets in 2000: annual GDP growth increased to 5.7%, compared to 5.1% in 1999. Inflation was reported to be 0.7% compared to 0.8% in 1999, and the current account deficit (excluding transfers) was held at less than 6% of GDP.

Reserves of foreign exchange and gold

This is a chart of trend of gross domestic product of Senegal at market prices estimated by the International Monetary Fund with figures in millions of CFA Francs.