The Economy of Poland is the largest economy in Central Europe,[11] sixth-largest in the EU[12] and the largest among the ex-communist members of the European Union.[13] Before the late-2000s recession its economy grew a yearly growth rate of over 6.0% .[14]

Poland has seen the largest increase GDP per capita (more than 100%) both among the former Soviet-bloc countries, and compared to the EU-15 (around 45%).[18] It has had uninterrupted economic growth since 1995, even after the 2007 financial crisis.[18]

This article discusses the economy of the current Poland, post-1989. For historical overview of past Polish economies, see:

The Polish state steadfastly pursued a policy of economic liberalization throughout the 1990s, with positive results for economic growth but negative results for some sectors of the population.[19] The privatization of small and medium state-owned companies and a liberal law on establishing new firms has encouraged the development of the private business sector, which has been the main drive for Poland's economic growth. The agricultural sector remains handicapped by structural problems, surplus labor, inefficient small farms, and a lack of investment. Restructuring and privatization of "sensitive sectors" (e.g. coal), has also been slow, but recent foreign investments in energy and steel have begun to turn the tide. Recent reforms in health care, education, the pension system, and state administration have resulted in larger than expected fiscal pressures. Improving this account deficit and tightening monetary policy, with focus on inflation, are priorities for the Polish government. Further progress in public finance depends mainly on the reduction of public sector employment, and an overhaul of the tax code to incorporate farmers, who currently pay significantly lower taxes than other people with similar income levels.

Since the 2009 financial crisis

Since the global recession of 2009, Poland's GDP continued to grow. In 2009, at the high point of the crisis, the GDP for the European Union as a whole dropped by 4.5% while Polish GDP increased by 1.6%.[20] As of November 2013, the size of EU's economy remains below the pre-crisis level, while Poland's economy increased by a cumulative 16%.[20] The major reasons for its success appear to be a large internal market (in terms of population is sixth in EU) and a business friendly political climate. The economic reforms implemented after the fall of communism in the 1990s have also played a role; between 1989 and 2007 Poland's economy grew by 177%, faster than other countries in Eastern and Central Europe, while at the same time millions were left without work.[20]

Another factor which allowed the Polish economy to avoid the financial crisis was its low level of public debt, at about 50% of GDP, below the EU average (around 90%).[20] Strict financial regulation also helped to keep household and corporate debt low. Furthermore, unlike many other European countries, Poland did not implement austerity but rather boosted domestic demand through Keynesian policy of tax cut, and foreign-assistance funded public spending.[20] An additional reason for its success lay in the fact that Poland is outside the Euro zone. The depreciation of the currency, the złoty, increased international competitiveness and boosted the value of Poland's exports (in złotys).[20] 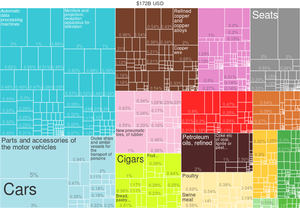 Unemployment in Poland appeared after the fall of communism, although the economy previously had high levels of hidden unemployment. The unemployment rate then fell to 10% by the late 1990s and then increased again in the first few years of the 21st century, reaching a peak of 20% in 2002. It has since decreased, although unevenly. Since 2008 the unemployment rate in Poland has consistently been below European average.[22]

With the collapse of the rouble-based COMECON trading bloc in 1991, Poland reoriented its trade. As early as 1996, 70% of its trade was with EU members. Neighboring Germany is Poland's main trading partner today. Poland joined the European Union in May 2004. Before that, it fostered regional integration and trade through the Central European Free Trade Agreement (CEFTA), which included Hungary, the Czech Republic, Slovakia and Slovenia.

Poland is a founding member of the World Trade Organization.[25] As a member of the European Union, it applies the common external tariff to goods from other countries including the United States. Major Poland's imports are capital goods needed for industrial retooling and for manufacturing inputs. The country's exports also include machinery, but are highly diversified. The most successful exports are furniture, foods,[26] motor boats, light planes, hardwood products, casual clothing, shoes and cosmetics.[27] Germany is by far the biggest importer of Poland's exports as of 2013.[28] In the agricultural sector, the biggest money-makers abroad include smoked and fresh fish, fine chocolate, and dairy products, meats and specialty breads,[29] with the exchange rate conducive to export growth.[30] Food exports amounted to 62 billion złoty in 2011, increasing by 17% from 2010.[31] Most Polish exports to the U.S. receive tariff benefits under the Generalized System of Preferences (GSP) program.

Poland is less dependent on external trade than most other Central and Eastern European countries, but its volume of trade with Europe is still substantial. In 2011 the volume of trade (exports plus imports) with the Euro area as share of GDP was 40%, a doubling from the mid 1990s. 30% of Poland's exports are to Germany and another 30% to the rest of Europe. There has been substantial increase in Poland's exports to Russia.[32] However, in August 2014, exports of fruits and vegetables to Russia fell dramatically following its politically motivated ban by Moscow.[33]

Foreign direct investment (FDI) was at 40% of GDP in 2010, a doubling over the level in 2000. Most FDI into Poland comes from France, Germany and Netherlands. Polish firms in turn have foreign investments primarily in Italy and Luxembourg. Most of the internal FDI is in manufacturing, which makes it susceptible to economic fluctuations in the source countries.[32]

Polish law is rather favourable to foreign entrepreneurs. The government offers investors various forms of state aid, such as: CIT tax at the level of 19% and investment incentives in 14 Special Economic Zones (among others: income tax exemption, real estate tax exemption, competitive land prices), several industrial and technology parks, the possibility to benefit from the EU structural funds, brownfield and greenfield locations. According to the National Bank of Poland (NBP) the level of FDI inflow into Poland in 2006 amounted to €13.9 billion.

According to an Ernst & Young report, Poland ranks 7th in the world in terms of investment attractiveness. However, Ernst & Young's 2010 European attractiveness survey reported that Poland saw a 52% decrease in FDI job creation and a 42% decrease in number of FDI projects since 2008.[35] According to the OECD (www.oecd.org) report, in 2004 Poles were one of the hardest working nations in Europe. Yet, the ability to establish and conduct business easily has been cause for economic hardship; the 2010 the World Economic Forum ranked Poland near the bottom of OECD countries in terms of the clarity, efficiency and neutrality of the legal framework used by firms to settle disputes.[36]

Agriculture employs 12.7% of the work force but contributes 3.8% to the gross domestic product (GDP), reflecting relatively low productivity. Unlike the industrial sector, Poland's agricultural sector remained largely in private hands during the decades of communist rule. Most of the former state farms are now leased to farmer tenants. Lack of credit is hampering efforts to sell former state farmland. Currently, Poland's 2 million private farms occupy 90% of all farmland and account for roughly the same percentage of total agricultural production. Farms are small—8 hectares on average—and often fragmented. Farms with an area exceeding 15 ha accounted for 9% of the total number of farms but cover 45% of total agricultural area. Over half of all farm households in Poland produce only for their own needs with little, if any, commercial sales.

Poland is a net exporter of processed fruit and vegetables, meat, and dairy products. Processors often rely on imports to supplement domestic supplies of wheat, feed grains, vegetable oil, and protein meals, which are generally insufficient to meet domestic demand. However, Poland is the leading EU producer of potatoes and rye and is one of the world's largest producers of sugar beets and triticale. Poland also is a significant producer of rapeseed, grains, hogs, and cattle. Poland is the largest producer and exporter of apples in the entire world, surpassing China.

Historically, mining industry in Poland had been extensive, particularly in Silesia. 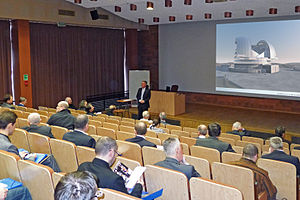 Poland's industrial base suffered greatly during World War II, and many resources were directed toward reconstruction. The socialist economic system imposed in the late 1940s created large and unwieldy economic structures[38] operated under a tight central command. In part because of this systemic rigidity, the economy performed poorly even in comparison with other economies in Central Europe.[38]

In 1990, the Mazowiecki government began a comprehensive reform programme to replace the centralised command economy with a market-oriented system. While the results overall have been impressive, many large state-owned industrial enterprises, particularly the rail, mining, steel, and defence sectors, have remained resistant to change and the downsizing required to survive in a market-based economy.[38]

The Polish banking sector is regulated by the Polish Financial Supervision Authority (PFSA).

While transforming the country to a market-oriented economy during 1992–97, the government privatized some banks, recapitalized the rest and introduced legal reforms that made the sector competitive. These reforms, and the health and relative stability of the sector, attracted a number of strategic foreign investors. At the beginning of 2009, Poland's banking sector had 51 domestic banks, a network of 578 cooperative banks and 18 branches of foreign-owned banks. In addition, foreign investors had controlling stakes in nearly 40 commercial banks, which made up 68% of the banking capital.[40] Banks in Poland reacted to the financial crisis of 2009 by restraining lending, raising interest rates, and strengthening balance sheets. Subsequently, the sector started lending again, with an increase of more than 4% expected in 2011.

Selection from the list of 500 largest companies in Poland compiled by magazine Polityka.[41]

Main articles: Polish zloty and Poland and the euro

The public and private debt levels of Poland are below the European average (2015).[18]