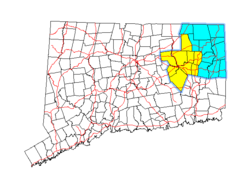 The Quiet Corner, also known as Northeastern Connecticut, is a region of the state of Connecticut, located in the northeastern corner of the state.[1] It is generally associated with Windham County, but also incorporates eastern sections of Tolland County and the northern portion of New London County. The most frequently cited boundary is the semi-rural town of Coventry, which is more rustic than the more suburban towns to the west.

The Quiet Corner is more rural than southern or central Connecticut, with large areas of farmland, rivers and lakes, and state forests. Its population centers are largely rural and semi-rural towns, many with populations below 5,000. It is one of the least-urbanized districts along the Northeast Megalopolis. Many of the towns are within commuting distance of Boston, but none are considered a part of the Boston Metropolitan Area, with only the Interstate 395 freeway spur passing through the "Quiet Corner" as a nationally signed part of the Interstate Highway System.[citation needed] Much of the region is part of the Quinebaug and Shetucket Rivers Valley National Heritage Corridor.

The region is popular with tourists for its traditional New England scenery, culture, locally produced foods and bed and breakfasts, and is especially noted for its many antique shops. Major attractions in the Quiet Corner include the main University of Connecticut campus in Storrs; the birthplace of Samuel Huntington in Scotland; Route 169, a National Scenic Byway running north-and-south through the region; the Prudence Crandall House Museum in Canterbury; the Nathan Hale Homestead in Coventry; and the many antiques shops of Pomfret, Putnam, and Woodstock.

The region has seen a resurgence in the production of local foods, producing local wines, cheeses, ice cream, apples, maple syrup, beer, and a variety of heirloom crops.