A section of US 22 in Pennsylvania between New Alexandria at U.S. Route 119 and Harrisburg at Interstate 81 has been designated a part of Corridor M of the Appalachian Development Highway System.

US 22 has its westernmost end-point in downtown Cincinnati --- however, its eastbound and westbound end-points are not at the same intersection. Officially, US 22 Eastbound begins on Central Avenue (U.S. Routes 27 Northbound/52 Westbound/127 Northbound) at 5th Street, then proceeds north, turning east onto 7th Street. Meanwhile, US 22 Westbound follows 9th Street and officially ends at Central Avenue[4] (signage designating the end occurs much sooner, approaching Elm Street, U.S. Route 42 Northbound).[5]

From downtown Cincinnati to Washington Court House, US 22 roughly follows the historic 3C Highway which connected Cincinnati, Columbus, and Cleveland. This section is also concurrent with State Route 3. At Washington Court House, State Route 3 and US 22 diverge. US 22 continues to the east through Circleville to Lancaster. From Lancaster to Zanesville, US 22 roughly follows the route of Zane's Trace, an early pioneer road blazed by Colonel Ebenezer Zane beginning in 1796.

Starting just west of Cadiz, US 22 becomes a limited-access expressway for the remainder of its 30-some miles in Ohio as it approaches and enters the Pittsburgh metropolitan area (with the exception of an at grade intersection with no stop lights or signs on US 22 and narrowing to two lanes for about a mile east of Cadiz). It junctions with State Route 7 for roughly a mile along the Ohio River shoreline in Steubenville.

Known as the Robert C. Byrd Expressway, the expressway route that began roughly 30 miles to the west near Cadiz, Ohio continues for approximately five miles within the state of West Virginia as it approaches more population density within the Pittsburgh metro area. US 22 travels through or borders the city of Weirton for its entire length, from the Pennsylvania state line on the east to the Ohio River and Steubenville, Ohio on the west.

Before the Byrd Expressway, West Virginia's segment of U.S. 22 ran from Pennsylvania Ave. at the PA/WV state line to Main St., then left on Main St. through downtown Weirton (aligning U.S. 22 with West Virginia Route 2), and right on Freedom Way to the Fort Steuben Bridge and Ohio River to Steubenville, Ohio. An "Alternate U.S. 22" route ran along Cove Rd. from Pennsylvania Ave. to the intersection of Harmon Creek Rd. (left turn) and the continuation of Cove Rd. (right turn).

With the opening of the first segment of the Byrd Expressway in the mid-1970s, U.S. 22 was reassigned, starting on the new road from the PA/WV state line, continuing on Cove Rd. where the expressway ended and joining the remainder of the original route at Main St. The Pennsylvania Ave. segment of U.S. 22 from Colliers Way to Main St. was reassigned as WV Route 105 and Alt. U.S. 22 was reassigned as WV Route 507. In 2003, WV 507 was extended along the previous U.S. 22 alignment from Cove Rd. to the Fort Steuben Bridge and was reassigned as County Route 507. The Fort Steuben Bridge, which originally carried U.S. 22 across the Ohio River until the construction of the Veterans Memorial Bridge, was permanently closed on January 8, 2009,[6] and demolished by detonation on February 21, 2012.[7]

Parts of U.S. 22 are still 2 lanes, though this stretch just west of Nanty Glo, Pennsylvania was widened by 2011.

US 22 between eight miles (13 km) east of Interstate 81 to Allentown is concurrent with Interstate 78. Former highway alignments of US 22 that parallel this section are collectively known as the "Hex Highway", so called because of the Berks County-based Pennsylvania Dutch families that hang hex signs on their barns.

US 22 in eastern Pennsylvania is a four lane limited-access expressway between Easton and Interstate 78 to the west; it is dually designated with the Lehigh Valley Thruway in Allentown. The original designation for this expressway was to be Interstate 78, but local opposition to a freeway in Phillipsburg, along with substandard conditions at Easton, forced federal highway officials to relocate Interstate 78 south of Allentown, Bethlehem, Easton, and Phillipsburg. U.S. 22 then crosses the Delaware River on the Easton–Phillipsburg Toll Bridge. 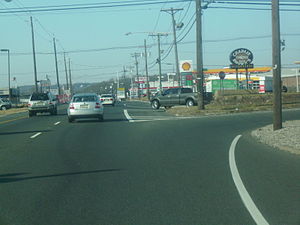 US 22 westbound at Springfield Road in Union

U.S. Route 22 in New Jersey predates, and was largely replaced by, Interstate 78 as it was built between 1956 and 1989,[9] and shares designation with I-78 from exit 3 to exit 18. US 22 was an expressway in some segments, including the area around Perryville and Clinton. It connects Phillipsburg with Newark in New Jersey.

US 22 has one major interchange besides I-78, that being Interstate 287, although it is not a full interchange, with two missing movements, US 22 eastbound to I-287 northbound and I-287 southbound to US 22 westbound.

The only level crossing of the highway happens in Union County in the Union Township section of the highway. It once belonged to the Rahway Valley Railroad; the crossing was closed in 1992 when service on the railroad was ended.

US 22 is one of the original U.S. Routes, though in the 1925 plan it was to terminate in Cleveland, Ohio, entering Ohio on modern U.S. Route 422. In the finalized 1926 plan, it followed the current course to U.S. Route 40, where it ended. In 1932, it had been extended to Cincinnati as it is currently, replacing Ohio State Route 10 and following preexisting State Route 3.[10][11]

I‑71 in Downtown Cincinnati

US 35 in Union Township

US 62 in Washington Court House. The highways travel concurrently through the city.

US 33 southwest of Lancaster

US 40 in Zanesville. The highways travel concurrently to Cambridge.

I‑70 in Perry Township

I‑77 in Cambridge Township

US 250 in Cadiz. The highways travel concurrently through the city.
West Virginia
No major intersections
Pennsylvania

US 30 in North Fayette Township. The highways travel concurrently to Wilkinsburg.

I‑376 in Robinson Township. The highways travel concurrently to [Monroeville, Pennsylvania|Monroeville]].

I‑79 in Collier Township

US 19 in Pittsburgh. The highways travel concurrently through the city.

US 119 in New Alexandria. The highways travel concurrently to Burrell Township.

US 522 in Wayne Township. The highways travel concurrently to Lewistown.

US 322 in Lewistown. The highways travel concurrently to Susquehanna Township.

I‑78 in Bethel Township

I‑78 in Upper Macungie Township

I‑78 on the Pohatcong–Greenwich township line. The highways travel concurrently to Clinton Township.

I‑287 in Bridgewater Township