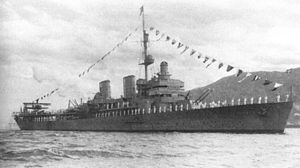 The aircraft cruiser (also known as aviation cruiser or cruiser-carrier) was originally a 1930s experimental concept of creating an all-around warship, trying to combine all the good features of the aircraft carrier and the heavy cruiser. The early aircraft cruisers were usually armed with relatively heavy artillery, mines and a number of aircraft fitted with floats (making the ship a kind of seaplane tender).

The early aircraft cruiser turned out to be an unsuccessful design. The rapid development of naval aircraft in the 1930s quickly rendered the vessels obsolete and they were rebuilt e.g. as anti-aircraft cruisers.

A more modern derivative of the aircraft cruiser is the helicopter cruiser. The Invincible-class aircraft carriers of the Royal Navy could also be considered; they were originally classed as cruisers due to their original role as command and control platforms as well as anti-submarine warfare (ASW) vessels, taking on those roles from the RN's Tiger-class cruiser conversions).

In the Russian Navy, "Aviation Cruiser" is a designation for the Kiev and Kuznetsov-class ships. They are a cross between cruiser and aircraft carrier and are divided in two classes, the aviation cruisers and the heavy aviation cruisers.

One United States design for a flight deck cruiser from 1930,[1] was described as "a Brooklyn-class light cruiser forwards [and] one half of a Wasp-class aircraft carrier aft".[2] Although not built, similar ships were created during and after World War II as reconstructions and later from the keel up. During World War II, in part to offset the loss of carriers at the Battle of Midway, Japan rebuilt its Ise-class battleships as hybrid carriers, with guns forward and amidships and a flight deck and hangar aft.

Post-war the United Kingdom reconstructed the Tiger-class cruisers, HMS Blake and HMS Tiger into helicopter cruisers, retaining their guns forward but having their aft guns removed for the installation of a hangar and helicopter platform for the operation of four Sea King helicopters.

Aviation cruisers have a variety of heavy weapons to engage the full gamut of surface, submarines and aircraft adversaries. In addition, these ships have close-in weapon systems, both gun and missile, for self-defense against missiles or rockets. 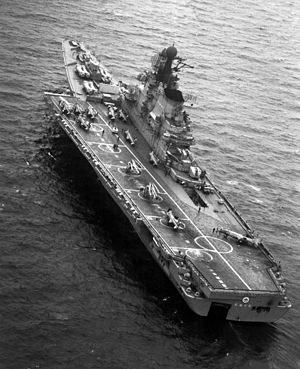