The Kuznetsov-class aircraft carriers (also known as the Kreml class) were built for the Soviet Navy. Admiral Flota Sovetskogo Soyuza Kuznetsov serves today in the Russian Navy. The only other ship in the class, Varyag, had not yet been commissioned when the Soviet Union broke up in 1991. Ukraine sold the unfinished hull to China, where it was completed and commissioned as Liaoning.[4]

While designated an aircraft carrier by the United States, the design of the Kuznetsov class implies a mission different from that of American carriers. The term used by her builders to describe the Russian ships is tyazholiy avianesushchiy kreyser (TAKR or TAVKR) – “heavy aircraft-carrying cruiser” – intended to support and defend strategic missile-carrying submarines, surface ships, and maritime missile-carrying aircraft of the Russian fleet.

The hull design is derived from the 1982 Kiev class,[5] but is larger. The flight deck, with an area of 14,700 metres (48,228.35 ft), is of a conventional angled-deck-carrier configuration, but equipped with a 12-degree ski-jump bow flight deck—instead of using aircraft catapults. This results in a configuration similar to that of the Royal Navy's Invincible-class aircraft carriers.

The shape of her flight deck is loosely similar to those of the U.S. Navy's and French Navy's aircraft carriers. Admiral Kuznetsov has a so-called "STOBAR" configuration: her flight deck is equipped with landing arrester-wires, but she has no catapults. The navalised Flanker has 12 hard points instead of ten and ordnance was limited to 6,500 kg (14,300 lb), because of the fighter's higher maximum takeoff weight (MTOW). Two aircraft elevators, on her starboard side forward and aft of her island, move her aircraft between her hangar deck and her flight deck.

In the original project specifications, the ship should be able to carry up to 33 fixed-wing aircraft and 12 helicopters .[3]

For defense against underwater attack, the ship carries the UDAV-1 ASW rocket launcher. 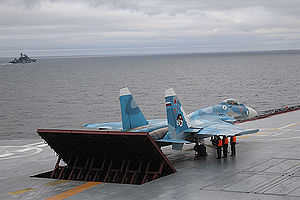 A Su-33 on board Admiral Kuznetsov

Admiral Flota Sovetskogo Soyuza Kuznetsov was designed by the Neva Design Bureau, St. Petersburg, and built at Nikolayev South Shipyard in Ukraine. She was launched in 1985, commissioned in 1990, and became fully operational in 1995. The vessel was briefly sequentially named Riga, Leonid Brezhnev, and Tbilisi.[3] During the winter of 1995–1996 Admiral Kuznetsov deployed to the Mediterranean Sea to mark the 300th anniversary of the Russian Navy. In the autumn of 2000, Admiral Kuznetsov went to sea for rescue and salvage operations for the submarine Kursk. During the winter of 2007–2008, Admiral Kuznetsov again deployed to the Mediterranean.

Although technical and financial problems have limited operations, Admiral Kuznetsov is expected to remain in service to 2025.[citation needed]

The second hull of the Kuznetsov class took a much more roundabout route to active service. Known first as Riga and then Varyag, she was laid down by Nikolayev South Shipyard in 1985 and launched in 1988. Varyag had not yet been commissioned when the Soviet Union dissolved in 1991, and was left to deteriorate in the elements. In 1998, the hull was sold by Ukraine to what was apparently a Chinese travel agency for ostensible use as a floating hotel and casino with the proviso that she would never become a functioning warship.[4] After an eventful journey under tow, she arrived in China in February 2002 and was berthed at the Dalian naval shipyard, where she was overhauled and completed as China's first aircraft carrier.[6]

In September 2012, the ship was commissioned in the Chinese navy as Liaoning,[7] named after the province where the shipyard is located. Today, she serves as a training carrier and its home port is Qingdao.[8]