The Project 1135 Burevestnik (Storm Petrel) class were a series of frigates built for the Soviet Navy. These ships are commonly known by their NATO reporting name of Krivak and are divided into Krivak I, Krivak II (both navy), and Krivak III (coast guard) classes.

These ships were designed as a successor to the Riga class. The design started in the late 1950s and matured as an anti-submarine ship in the 1960s. A total of 40 ships were built, 32 ships for the Soviet Navy (Russian Navy) and 8 modified ships of Nerey (Krivak III) subclass for the KGB Maritime Border Guard. Currently 7 of Nerey subclass are in FSB Coast Guard and one is part of Ukrainian Navy.

The ship's unique features—the bow missile box, the stack and the angled mast, earned it a rap-like nickname among U. S. sailors that comes from their foreign ship silhouette identification training — "Hot dog pack, Smokestack, Guns in Back — Krivak."

How many ships remain in active duty is uncertain. According to some sources Russia has four units in service and the Ukrainian Navy, one.[2][3] Russian press listed three units operational in February 2008, one with the Baltic Fleet and two with the Black Sea Fleet (BSF).[4] 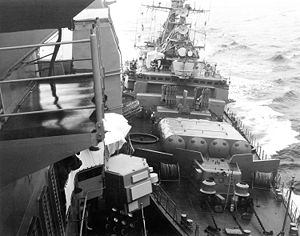 The Soviet Burevestnik-class frigate Bezzavetny (FFG 811) collides with the US cruiser USS Yorktown in the 1988 incident.

Burevestnik (or Krivak I) 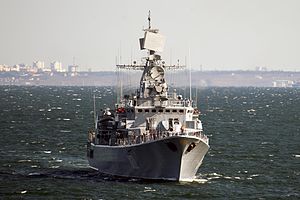 All ships were built in Kerch. All ships were intended for the Soviet border guard. Seven ships are operated by the Russian Maritime Border Guard (2008)

Operated by the Ukrainian Navy

Three improved Nerei frigates were ordered by the Indian Navy on 17 November 1997. They are known as Talwar-class frigates in Indian naval service. Three more, armed with the Brahmos missile, were ordered on 14 July 2006.[12]

Three frigates of the Admiral Grigorovich class were ordered for the Black Sea Fleet to be built by the Yantar Yard in Kaliningrad which is also building the Talwar class for the Indian Navy.