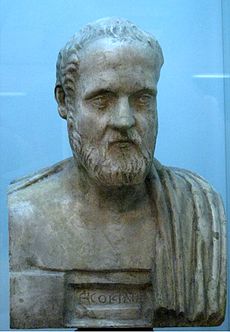 Isocrates, shown here in a copy of a bust from Villa Albani in Rome, was one of the foremost thinkers about paideia.

In the culture of ancient Greece, the term paideia (/paɪˈdeɪə/;[1] Greek: παιδεία) referred to the rearing and education of the ideal member of the polis. It incorporated both practical, subject-based schooling and a focus upon the socialization of individuals within the aristocratic order of the polis. The practical aspects of this education included subjects subsumed under the modern designation of the liberal arts (rhetoric, grammar and philosophy are examples), as well as scientific disciplines like arithmetic and medicine. An ideal and successful member of the polis would possess intellectual, moral and physical refinement, so training in gymnastics and wrestling was valued for its effect on the body alongside the moral education which the Greeks believed was imparted by the study of music, poetry and philosophy. This approach to the rearing of a well-rounded Greek male was common to the Greek-speaking world, with the exception of Sparta where a rigid and militaristic form of education known as the agoge was practiced.

The idea of paideia

The Greeks considered paideia to be carried out by the aristocratic class who tended to intellectualize their culture and their ideas. The culture and the youth were "moulded" to the ideal of kalos kagathos, "beautiful and good." This idea is similar to that of the medieval knights, their culture, and the English concept of the gentleman.

Greek paideia is the idea of perfection, of excellence. The Greek mentality was "to be always pre-eminent"; Homer records this charge of King Peleus to his son Achilles. This idea is called arete. "Arete was the central ideal of all Greek culture."[2]

In the Iliad, Homer portrays the excellence of the physicality and courage of the Greeks and Trojans. In The Odyssey, Homer accentuates the excellence of the mind, or wit, that was also necessary for winning. Arete is a concomitant of what it meant to be a hero and a component of warfare that was necessary in order to succeed. It is the ability to "make his hands keep his head against enemies, monsters, and dangers of all kinds, and to come out victorious."[3]

This mentality can also be seen in the Greeks' tendency to reproduce and copy only literature that was deemed the "best", in the Olympic games, and in literature, with competitions in poetry, tragedy, and comedy. "Arete" was infused in everything the Greeks did. The mentality of arete can be stretched even further to the competing paideias of the Greek philosophers Isocrates and Plato, who both created highly influential schools in Greece. Although both rejected the current polis education, their rivalry of rhetoric and science for leadership in the realm of education and culture became one that they could not overcome.[4] In Antidosis, Isocrates was compelled to defend himself against accusations that education makes people depraved, a charge that Socrates and Plato openly discuss in Republic. In Isocrates introductory speech Against the Sophists, it is clear that he has Plato's 'prospectuses' Gorgias and Protagoras, before him, and is deliberately trying to set up his own ideal of paideia in contrast to theirs. [5]

In modern discourse, the German-American classicist Werner Jaeger, in his influential magnum opus Paideia (3 vols. from 1934; see below), uses the concept of paideia to trace the development of Greek thought and education from Homer to Demosthenes. The concept of paideia was also used by Mortimer Adler in his criticism of contemporary Western educational systems, and Lawrence A. Cremin in his histories of American education.

The Greeks described themselves as "Lovers of Beauty," and they were very much attuned to aesthetics. They saw and appreciated beauty in nature. They noticed a particular proportion called the golden ratio (roughly 1.618) and its recurrence in many things. They spoke of the need for balance as the golden mean—choosing the middle and not either extreme—and believed that beauty was not in the superficialities of color, light, or shade, but in the essence of being, expressed in structure, line, and proportion.

The Greeks sought balance in all aspects of human endeavor and experience. The Golden Mean is the cultural expression of this principle throughout the Greek paideia: architecture, art, politics, and human psychology.

Isocrates helped in making Athens one of the leaders in Greece through his paideia. Isocrates' goal was to construct a practice of education and politics that gave validity in the democratic deliberative practice while remaining intellectually respectable.[6] He wanted to elevate his Athenian audience to the level of philosophia by making them apply, in particular, a principle of intellectual consistency to their lives. The fundamental aspects of his paideia was achievement of consistency on the individual, the civic, and the panhellic level.[7] Isocrotean paideia became crucial to the survival of the polis through the identification of rhetorical with political excellence and the elevation of the Isocrotean audience to the status of philosophoi.

Sayings and proverbs that defined paideia