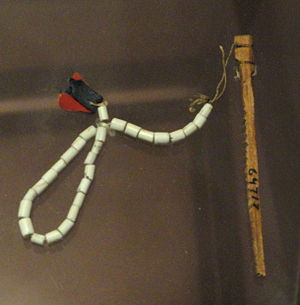 A message stick is a form of communication traditionally used by Indigenous Australians. It is usually a solid piece of wood, around 20–30cm in length, etched with angular lines and dots.

Traditionally, message sticks were passed between different clans and language groups to establish information and transmit messages. They were often used to invite neighbouring groups to corroborees, set-fights and ball games.

Alfred Howitt wrote of the Wurundjeri people of the Melbourne area:

The oldest man (Headman) having made such a message stick hands it to the old man nearest to him, who inspects it and, if necessary, adds further marks and gives corresponding instructions. Finally, the stick having passed from one to the other of the old men present is handed to the messenger, who has received his verbal message in connection with it. If any duration of time is connected with the message, or if an enumeration of stages or camps is made, a method is used (see Australian Aboriginal enumeration) [to explain this].[1]

They are often commonly called letters by Aboriginal people. They were transmitted by mailmen, who could travel hundreds of kilometres to deliver them.

Donald Thomson, recounting his journey to Arnhem Land after the Caledon Bay Crisis, writes of Wonggu sending a message stick to his sons, at that time in prison, to indicate a calling of a truce. In etched angles, it showed people sitting down together, with Wonggu at the centre, keeping the peace.[2]

Jeannie Gunn wrote about life at a station at Mataranka in the Northern Territory in 1902:

Then he ['Goggle-Eye'] showed me a little bit of stick with notches on it, and said it was a blackfellow's letter-stick, or, as he called it, a "yabber-stick." It was round, not flat like most other letters, and was an invitation to a corroboree; and there were notches on it explaining what sort of corroboree it was, and saying that it was to be held at Duck Creek. There was some other news marked on it... [3]

The student newspaper of the University of New South Wales goes by the name Tharunka, which means message stick in a Central Australian dialect.