Adalbert Stifter (German: [ˈʃtɪftɐ]; 23 October 1805 – 28 January 1868) was an Austrian writer, poet, painter, and pedagogue. He was especially notable for the vivid natural landscapes depicted in his writing and has long been popular in the German-speaking world, while remaining almost entirely unknown to English readers.

Born in Oberplan in Bohemia (now Horní Planá in the Czech Republic), he was the eldest son of Johann Stifter, a wealthy linen weaver, and his wife, Magdalena. Johann died in 1817 after being crushed by an overturned wagon. Stifter was educated at the Benedictine Gymnasium at Kremsmünster, and went to the University of Vienna in 1826 to study law. In 1828 he fell in love with Fanny Greipl, but after a relationship lasting five years, her parents forbade further correspondence, a loss from which he never recovered. In 1835 he became engaged to Amalia Mohaupt, and they married in 1837, but the marriage was not a happy one. Stifter and his wife, unable to conceive, tried adopting three of Amalia's nieces at different times. One of the children ran away, and another, Juliana, disappeared and was found drowned in the Danube four weeks later.

Instead of becoming a state official, he became a tutor to the aristocrats of Vienna, and was highly regarded as such. His students included Princess Maria Anna von Schwarzenberg and Richard Metternich, son of Klemens Wenzel von Metternich. He also made some money from selling paintings, and published his first story, "Der Condor", in 1840. An immediate success, it inaugurated a steady writing career.

Stifter visited Linz in 1848, and moved there permanently a year later, where he became editor of the Linzer Zeitung and the Wiener Bote. In 1850 he was appointed supervisor of elementary schools for Upper Austria.

His physical and mental health began to decline in 1863, and he became seriously ill from cirrhosis of the liver in 1867. In deep depression, he slashed his neck with a razor[1] on the night of 25 January 1868 and died two days later. 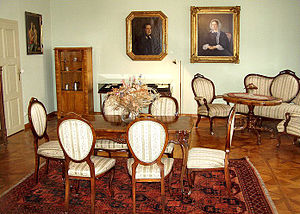 Stifter's study in his Linz house

Stifter's work is characterized by the pursuit of beauty; his characters strive to be moral and move in gorgeous landscapes luxuriously described. Evil, cruelty, and suffering rarely appear on the surface of his writing, but Thomas Mann noted that "behind the quiet, inward exactitude of his descriptions of Nature in particular there is at work a predilection for the excessive, the elemental and the catastrophic, the pathological." Although considered by some to be one-dimensional compared to his more famous and realistic contemporaries, his visions of ideal worlds reflect his informal allegiance to the Biedermeier movement in literature. As Carl Schorske puts it, "To illustrate and propagate his concept of Bildung, compounded of Benedictine world piety, German humanism, and Biedermeier conventionality, Stifter gave to the world his novel Der Nachsommer".[2]

The majority of his works are long stories or short novels, many of which were published in multiple versions, sometimes radically changed. His major works are the long novels Der Nachsommer and Witiko.

Stifter's Der Nachsommer (1857) and Gottfried Keller's Die Leute von Seldwyla (The People of Seldwyla) were named the two great German novels of the 19th century by Friedrich Nietzsche.[3] Der Nachsommer is considered one of the finest examples of the Bildungsroman, but received a mixed reception from critics at the time. Friedrich Hebbel offered the crown of Poland to whomever could finish it, and called Stifter a writer only interested in "beetles and buttercups."

Witiko is a historical novel set in the 12th century, a strange work panned by many critics, but praised by Hermann Hesse and Thomas Mann. Dietrich Bonhoeffer found great comfort from his reading of Witiko while in Tegel Prison under Nazi arrest.

In the German edition of his Reminiscences, Carl Schurz recalls his meeting with the daughter of the keeper of the Swiss inn he was staying at whose favorite book was Stifter's Studien.[4] This incident occurred prior to 1852.

He was named as an influence by W. G. Sebald, and both W. H. Auden and Marianne Moore admired his work, the latter co-translating Bergkristall as Rock Crystal with Elizabeth Mayer in 1945. Auden included Stifter in his poem "Academic Graffiti" as one of the celebrities, literary and otherwise, captured in a clerihew: Adalbert Stifter / Was no weight-lifter: / He would hire old lags / To carry his bags.[5]

In Hermann Hesse's Steppenwolf, the main character Harry Haller wonders "whether it isn't time to follow the example of Adalbert Stifter and have an accident while shaving".

Thomas Mann was also an admirer of Stifter, calling him "one of the most extraordinary, the most enigmatic, the most secretly daring and the most strangely gripping narrators in world literature."

Rilke and Hugo von Hofmannsthal were deeply indebted to his art.[citation needed]

In 2007 German theater director Heiner Goebbels, inspired by works of Adalbert Stifter, composed and directed a musical installation called Stifters Dinge (Stifter's Things), which premiered in 2007 at the Théâtre Vidy-Lausanne, in Lausanne, Switzerland.[6]